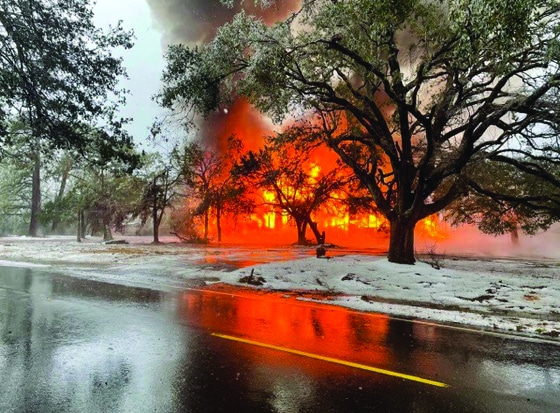 The White House Lodge, an old school building transformed into a hotel for camp leaders at Dry Creek Baptist Camp, went up in flames during the recent snow and ice event. The 100-year old structure was just one of many mishaps the camp has had to endure since since Hurricanes Laura and Delta. Submitted photo

DRY CREEK, La. (LBM)—Many people refer to Hurricanes Laura and Delta and the coronavirus pandemic as “acts of God.” Combine these with a hotel fire, and the subsequent revenue losses from the several calamities have slammed Dry Creek Baptist Camp in Beauregard Parish. But Director Todd Burnaman remains undaunted, saying God is acting now, after the disasters.

“I trust that God has a plan to renew us, give us new tools, better tools, for ministry to attract people,” he said. “James chapter one says that trials develop perseverance, and that brings us to completion. We’ve definitely experienced those trials. But without the bat of an eye, we understand God’s faithfulness.”

Burnaman estimates that losses for the last 12 or so months approach $2 million. The recent fire that consumed the White House lodge, an old school building transformed into a hotel for camp leaders, accounts for about $1 million of that total.

“That was a real gut punch,” he said, noting the significant loss of the asset and future revenue source. The cause of the fire is not yet known; regardless, Burnaman said he finds solace in “God’s decision that our time with the hotel was up.”

The turn-of-the-century structure usually housed 40–60 people per week of camp. “We still haven’t figured out an alternative for this loss,” he said.

Hurricane Laura toppled more than 500 trees within the common areas of the camp. Some fell on buildings, electrical lines, and outdoor activity resources.

Burnaman estimates that tens of thousands of labor hours have been invested in recovery and repair efforts, so far. Louisiana Baptist Disaster Relief, Campers on Mission, and other volunteer groups have come from ten states. More are on the way in coming weeks. 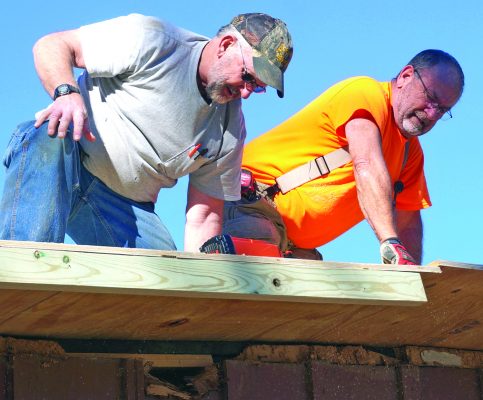 Many roofing, plumbing, electrical work, interior finish carpentry and tree removal projects are completed, he said. But more of the same kinds of repairs remain.

Other than mitigation of hurricane water damage to the old hotel, roofing is the only other repair the camp has had to underwrite.

Financial projections at mid-March last year were that the camp had enough budget to last six weeks. “But we’re still here,” Burnaman said. “Our contribution line item was up more than 700 percent. God has worked in the hearts of people to support us: nearly $400,000 came in.”

Those funds were used to pay for insurance and to help keep the doors open.

Such generosity “is a testimony to God’s faithfulness and provision,” said Burnaman, noting that a significant financial gap remains. “We’ve been on financial life support since last March.”

Prayer support is vital, Burnaman said. “Louisiana Baptists need to know that we are looking to the future and seeking God’s vision. We ask for prayers that we will have the faith to follow Him. It’s an uphill rocky climb; please pray that we’ll have the courage to continue following him day-in and day-out.”

Dry Creek Baptist Camp plans to operate at 50 percent capacity this summer with virus precautions in place, although facilities are not yet 100 percent of what they were. “But our message and our passion — they’re at 110 percent,” Burnaman declared. “We trust that people will continue to believe in the ministry of Dry Creek and send their kids. We will take excellent care of them, and they will hear the Gospel when they’re here.”

The camp’s phone system is not operational: Those who want more information about summer camps, or who want to contribute funds to support the camp or volunteer for recovery efforts, should contact Dry Creek Baptist Camp through Facebook Messenger.

By Don F. Mabry ALEXANDRIA, La. (LBM)-- The number of churches in our country constantly is changing and it is very difficult to acquire information from the various denominations, but estimates indicate that there are 330,000 Christian churches and congregations in the United States today. But the question … END_OF_DOCUMENT_TOKEN_TO_BE_REPLACED