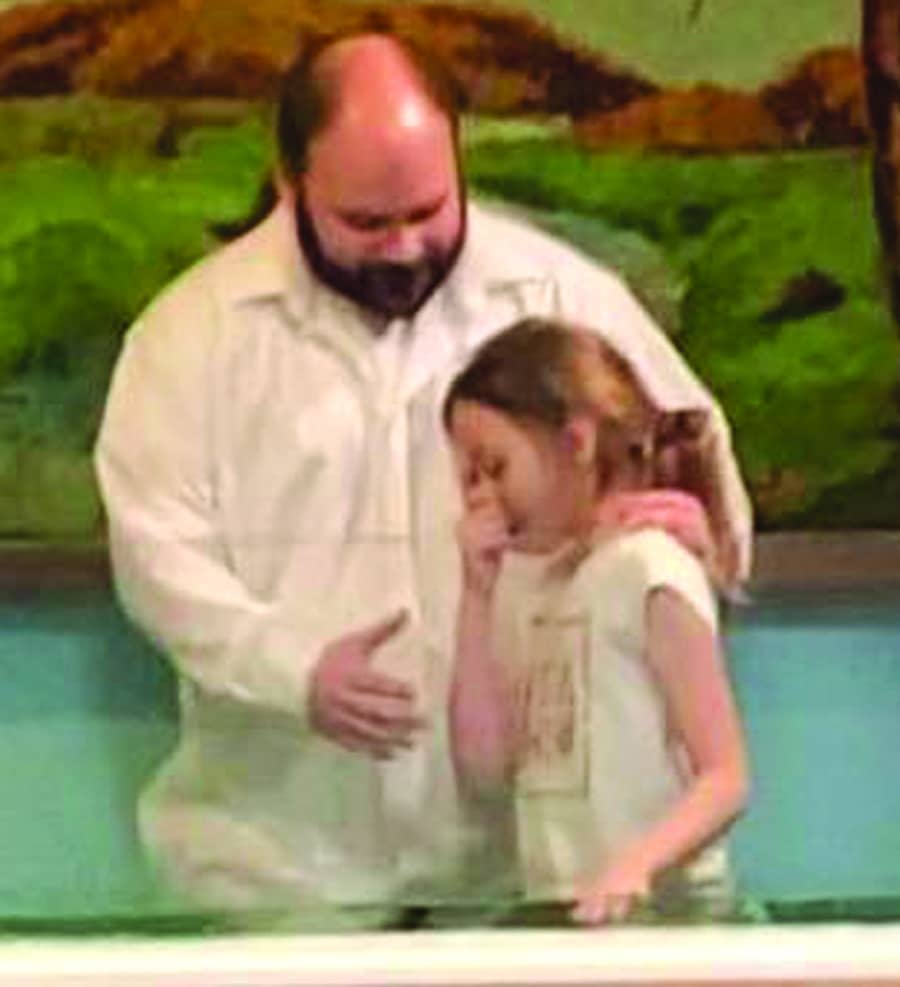 Scott Scallan baptizes Adelynn Franks during a service, Feb. 28, at Shiloh Baptist Church in Bernice. Scallan also recited, from memory, the book of Hebrews during the service which marked his 10th year at the church. Submitted photo

BERNICE, La. (LBM) – Scott Scallan recently celebrated his 10-year anniversary at Shiloh Baptist Church in Bernice, honoring God through the church’s first baptism of 2021 and with a recitation from memory of the book of Hebrews.

“It’s always a blessing to have a baptism; to have someone publicly declare their faith this way,” Scallan said of the special day, Feb. 28. “One of the themes of Hebrews is the importance of faith. I can’t think of a better way to introduce the book of Hebrews than to baptize someone to bring home the message of faith and Christ’s sacrifice for us all.”

Two months before the service, Adelynn Franks, 7, shared with her parents Kimberly and Daniel, how she was a sinner and needed Christ to come into her life.

Kimberly Franks noted that several years of sowing biblical truths into her daughter resulted in reaping the hoped-for spiritual fruit in the youngster’s life.

“Our hearts are filled with so much joy,” Kimberly Franks said. “As a parent, one of my responsibilities is to raise her in a godly way so at one point she will hopefully make that decision to accept Christ. Seeing that fulfilled through her and knowing what God is doing already in her life is very fulfilling and rewarding. Adelynn wanted to do this so she could show others she was a believer; in turn, I was encouraged in my own faith.”

It was his special way to honor God in celebrating the 10th anniversary of his serving as pastor of the congregation. He prayed about the anniversary for several months, and he kept thinking about multiple messages he had preached about Hebrews, several years ago. He felt compelled to memorize the entire book and began systematically learning this large portion of Scripture by heart in August 2020.

He teased his plans to congregants on Facebook; stating he was going to do “something big.”

“The only thing I told them at the beginning of February was to invite someone to come Feb. 28 because it was going to be something they wouldn’t have seen before.”

He said he did not want simply to repeat the words, but to be more honoring to God.

“My goal was always not to mechanically recite Hebrews but to understand it in order to deliver the book just like a sermon,” he said, adding that, at times, he was tempted to reverse course and stop memorizing Hebrews, but the Holy Spirit gave him the energy to press forward.

“I developed a greater appreciation of Christ, the new covenant and the promise of the new blessing,” he said. “One of the main messages of Hebrews is endurance and staying in the faith. There were points over the last few months where I got to certain chapters and wondered if I would quit. To be memorizing a book about perseverance and endurance and to keep that mindset and lean on Him for the strength to keep pressing on and running the race before us was a growth experience.”

Scallan said his congregation, which averages 35 worshipers on Sunday mornings, has treated his wife and children like extended family. Together, they have pressed on and reached out to the community through the best and worst of times.

Their ministry efforts have included partnering with other churches in the area to provide meals for needy families and joining with other congregations for community worship services.

He also shared that he is excited about what lies ahead for the next 10 years and more.

“It’s been sweet to have them accept us into their fellowship and watch my family grow up,” he said. “God has been good to us and given us a true family to share the Gospel with our neighbors and beyond.”

By Don F. Mabry ALEXANDRIA, La. (LBM)-- The number of churches in our country constantly is changing and it is very difficult to acquire information from the various denominations, but estimates indicate that there are 330,000 Christian churches and congregations in the United States today. But the question … END_OF_DOCUMENT_TOKEN_TO_BE_REPLACED