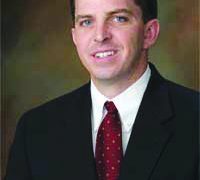 By Steve Horn, pastor, First Baptist Lafayette I am sure that since today is Inauguration Day, more articles will come your way than you can possibly read. Well, here is one more. I will try to keep it short. Back in December, I had the privilege of praying as the Louisiana Electoral College formally cast their votes. I want to share with you the content of my prayer that day in hopes that you might join me in praying along these lines as President Trump takes office today. Heavenly Father, As the Psalmist declared, “Some trust in chariots and some trust in horses, but we will trust in the name of the Lord, our God.” (Psalm 20:7) We give You thanks today as we should do in all things. We give You thanks for grace upon our nation. We give You thanks for the opportunity to participate in an election. We give You thanks for the election of Donald Trump. And now, oh God, we pray in the spirit of the prophet of old, Zechariah. We pray for favor and union. We pray for unity in our nation and we pray for the favor of God to rest on our nation. (Zechariah 11:7) We pray for God’s wisdom to rest both on President Trump and Vice-President Pence. We pray in the spirit of 1 Timothy 2 that they might lead us in such a way … END_OF_DOCUMENT_TOKEN_TO_BE_REPLACED 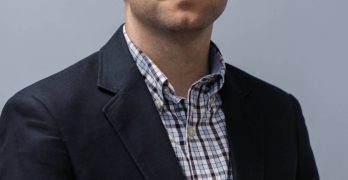 By Kaitlyn Moore PINEVILLE (LCNews) - Concluding a months-long, nationwide search, Louisiana College tapped Mr. Howard “Rusty” Tryon Jr as director of the College’s library. “We are blessed to have Mr. Tryon join the LC family as the director of our library,” said Dr. Rick Brewer, president of Louisiana College. “We were keenly interested in adding a Christian leader to our team and someone who was student centered. He has exceeded our expectations because these attributes were obvious from Rusty’s background and interview.” Tryon comes to LC from Liberty University in Lynchburg, Va., where he was Head of Collection Management for 4.5 years. Tryon told LCNews he is “highly attracted to the Christian identity and mission of Louisiana College.” Previously, Tryon was acquisitions librarian at Midwestern Baptist Theological Seminary in Kansas City, Mo., where he earned a Master of Divinity degree. He also holds a Master of Library Science degree from Indiana University. Tryon also earned an undergraduate degree in German and International Relations from Indiana State University. “We are thrilled to fill this critical role with someone of Rusty’s credentials and heart for academics,” Brewer said. “The vision and … END_OF_DOCUMENT_TOKEN_TO_BE_REPLACED 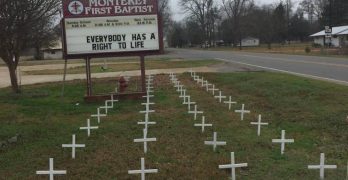 By Message Staff MONTEREY – First Baptist Church Monterey has nearly 50 reasons to show all who pass by its property why all lives matter. Situated along Highway 129, the church has placed almost 50 crosses on its grounds to represent not only all the lives that have been lost to abortion but to bring attention to the fact that every person has a right to life. Church member Dick Young said the effort began 10 years ago, after he and others in the congregation were led to take a step of action for the pro-life cause. “The first thought we had back then was the large number of abortions that were occurring and we didn’t feel that was a good thing,” Young said. “We wanted to do something that would help people who drove by to recognize abortion affects the unborn and it is terrible. “We knew that not enough of us spoke up back before abortion was legalized, thinking it would never happen in America,” he said. “While it was too late for those who have been aborted in the past, we can at least do our part and take some sort of action step to perhaps correct our past mistakes.” The crosses, which were placed in the ground in mid-January, are expected to remain in place until the end of the month. According to the … END_OF_DOCUMENT_TOKEN_TO_BE_REPLACED 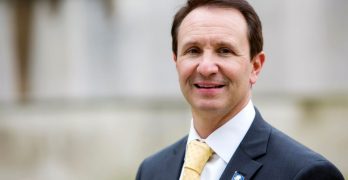 By Message Staff BATON ROUGE – The Louisiana Family Forum is urging all pro-life advocates to send an e-mail to Gov. John Bel Edwards, thanking him for reaching a resolution on how to move forward on a lawsuit that challenges several abortion restrictions. Edwards has agreed to allow state Attorney General Jeff Landry use noted attorney Kyle Duncan, a nationally-recognized conservative litigator from Washington, D.C. to defend against a challenge to the restrictions on abortions that take place in Louisiana, according to a story in the New Orleans Times-Picayune. These include new requirements to force women to wait 72 hours and agree to an ultrasound before they have an abortion. The state also is partially banning the dilation and evacuation procedure, an abortion that occurs during the second trimester of pregnancy. Edwards has signed those restrictions into law. The Times-Picayune reported that Edwards was reluctant to approve the previous contract hiring Duncan because he did not agree to Edwards’ executive order, which would have provided protections for lesbian, gay, bisexual and transgender people in the workplace. Edwards wanted state contractors, including attorneys such as Duncan, to prohibit workplace … END_OF_DOCUMENT_TOKEN_TO_BE_REPLACED 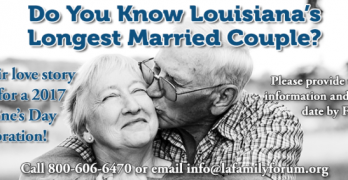 By Message Staff BATON ROUGE – The search is on yet again for Louisiana's longest married couple. The Louisiana Family Forum is holding its annual contest to find the top 10 longest-married couples in the state, who will be entered into the family advocacy group’s Marriage Hall of Fame. “Sharing these stories of life-long faithfulness encourages the next generation to understand that being happily married still happens and still lasts a lifetime. We are honored and obligated to communicate these stories of enduring love,” said Louisiana Family Forum President Gene Mills. “Many have been told that marriage cannot last, that it is too difficult, but our longest married honorees demonstrate that being a ‘Covenant Keeper’ is a life-long commitment.” Those eligible for the contest must have been married for at least 70 years before Feb. 5. Eligible couples must submit their contact information and wedding date before Feb. 5 to info@lafamilyforum.org. Last year, Louisiana Family Forum named Lawrence and Varrie Player of Benton as the state’s longest-married couple at 81 years. The contest is held each year during National Marriage Week USA, which is Feb. 7-14. The week is an effort “to strengthen individual … END_OF_DOCUMENT_TOKEN_TO_BE_REPLACED 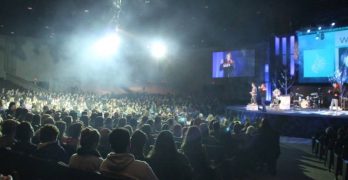 By Message Staff BOSSIER CITY – Former LSU soccer player Mo Isom and First Baptist Bossier City Pastor Brad Jurkovich are among those scheduled to speak during the upcoming Feugo Frio student conference. Scheduled for Feb. 10-11 at First Baptist Bossier City, Fuego Frio will feature eight pastors from throughout the U.S., each speaking for 10 minutes on a variety of topics. Other highlights of the weekend include illusionist Danny Ray of Yucaipa, Calif., comedians 321 Improv of Boca Raton, Fla., and musical guests the Hardcastles of Austin, Texas. “What we’ve got is these eight speakers who represent some of the largest churches in America do 10 minute talks,” said Jeff Luce, director of Camp Fuego. “We have these guys who are really solid communicators commanding an audience of so many on Sundays and they’ve agreed to come in for this short blast to talk to students about their passion.” Last year, 1,594 youth from at least five states attended Fuego Frio. By the end of the conference, 72 of them made a first-time decision to follow Christ as their Lord and Savior. “That’s the purpose of this whole weekend,” Luce said. “In the end, we come together to see major moves in people’s lives, which is the real benefit of … END_OF_DOCUMENT_TOKEN_TO_BE_REPLACED 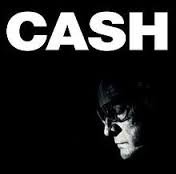 By Ron F. Hale Raw emotion swept over me the first time I saw and heard Johnny Cash’s video rendition of “Hurt,” a song first recorded by Nine Inch Nails in 1994. Seeing the now frail Cash singing the ghostly opening lyrics made me feel just a hint of the heartache that made the “Man in Black.” I hurt myself today To see if I still feel I focus on the pain The only thing that’s real   The needle tears a hole The old familiar sting Try to kill it all away But I remember everything   The eerie medley and montage of a life-time of photos and film clips of Johnny along with his unmistakable voice helped rank the video one of the “The 30 All-Time Best Music Videos” by Time. There was a hopeless day in 1967 that Johnny literally crawled into a deep dark cave to die.  The accumulated pain and shame of a decade of doing drugs, popping pills, ruined relationships, while always riding the rapids of whiskey river brought him to the mouth of Nickajack Cave on the Tennessee River north of Chattanooga. All his “uppers” had turned to “downers,” but Johnny wasn’t blaming anyone but himself. He knew that he had been his own worst enemy. The “Man in Black” would die in total darkness that … END_OF_DOCUMENT_TOKEN_TO_BE_REPLACED 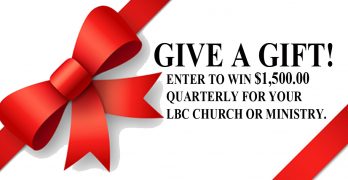 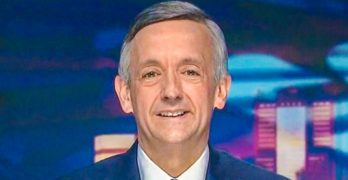 By Robert Jeffress, pastor, First Baptist Dallas, Texas The mind of man plans his way, but the Lord directs his steps. --Proverbs 16:9 If you have made a big mistake or bad choice, perhaps you have asked some of the following questions about God’s role in your failure: If God is all-powerful and all-knowing, then did His plan for me include my failure? If my failure was part of God’s sovereign plan, then how can God hold me responsible? If God’s script for my life has already been written, then does it matter what I do? These questions have profound implications for understanding how we can have a second act in life. What is God’s role in our past mistakes? This week, we will look at the relationship between God’s sovereignty and our choices. The most foundational principle is this: God is in control of everything that happens. God’s sovereignty means that God is in charge of everything that happens in His universe. In Isaiah 45:6, God says, “There is no one besides Me. I am the Lord, and there is no other.” God has no competition in this universe. There is nobody He is trying to wrestle control of this universe from. Many people accept the sovereignty of God in theory, but they have a hard time … END_OF_DOCUMENT_TOKEN_TO_BE_REPLACED