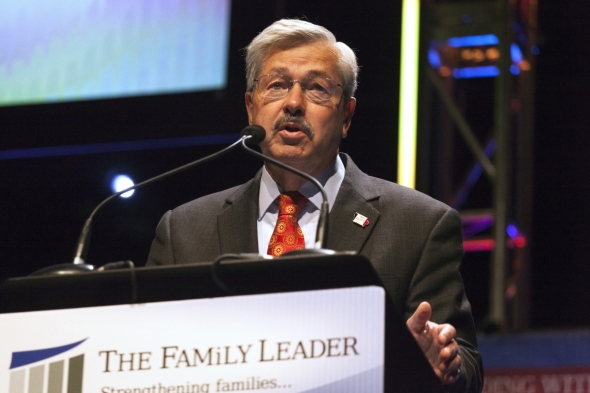 Gov. Terry Branstad has issued a proclamation encouraging all citizens of Iowa to read the Bible over a four-day period leading up to July 4.

***This article was previously posted at the Christian Examiner and is used by permission.

DES MOINES (Christian Examiner) – A Wisconsin-based atheist group has fired off an angry letter to the governor of Iowa after he issued a proclamation encouraging the citizens of his state to read the Bible.

In the proclamation, Gov. Terry Branstad asked Iowans to join together in an historic Bible reading marathon in front of all 99 county courthouses across the state between June 30 and July 3, in preparation for the national Fourth of July holiday.

Branstad said in the proclamation “all Scripture is essential to prepare us to be the people God wants us to be and to accomplish the purpose for which he created us.”

He also claimed, “the Bible is recognized as the one true revelation from God, showing the way of Salvation, Truth, Life” and “regular Bible reading renews the mind of men, thus transforming the life of the individual which ultimately affects the lives of those in the family, the local community, the state, and the Nation.”

The atheist Freedom from Religion Foundation, however, called the proclamation “problematic on a lot of different levels” and a violation of “Iowa’s constitutional obligation to remain neutral toward religion.”

In a letter to the governor, FFRF’s staff attorney Andrew Seidel said the governor’s proclamation is a “heavy-handed attempt to elevate one particular set of faith-based beliefs over every other. And you’ve used ‘the name … and authority of the State of Iowa’ to issue it.”

FFRF took exception to historical interpretations in the proclamation, such as a supposed quote from Andrew Jackson on the importance of the Bible. The atheist group claims the quote is not in any historical source and only appeared 20 years after his death. It also claimed George Washington never mentioned the name of Jesus Christ in all of his letters. Washington was declared a Christian in the proclamation.

To read the rest of the story, click here

By Joe McKeever “‘…your ways are not my ways,’ saith the Lord.”  (Isaiah 55:8) Keep an eye on how the Lord works in your life. You might learn something useful for the next time He wants to use you. This little couplet seems to sum up 90 percent of what Scripture and life teach us concerning the operation … END_OF_DOCUMENT_TOKEN_TO_BE_REPLACED