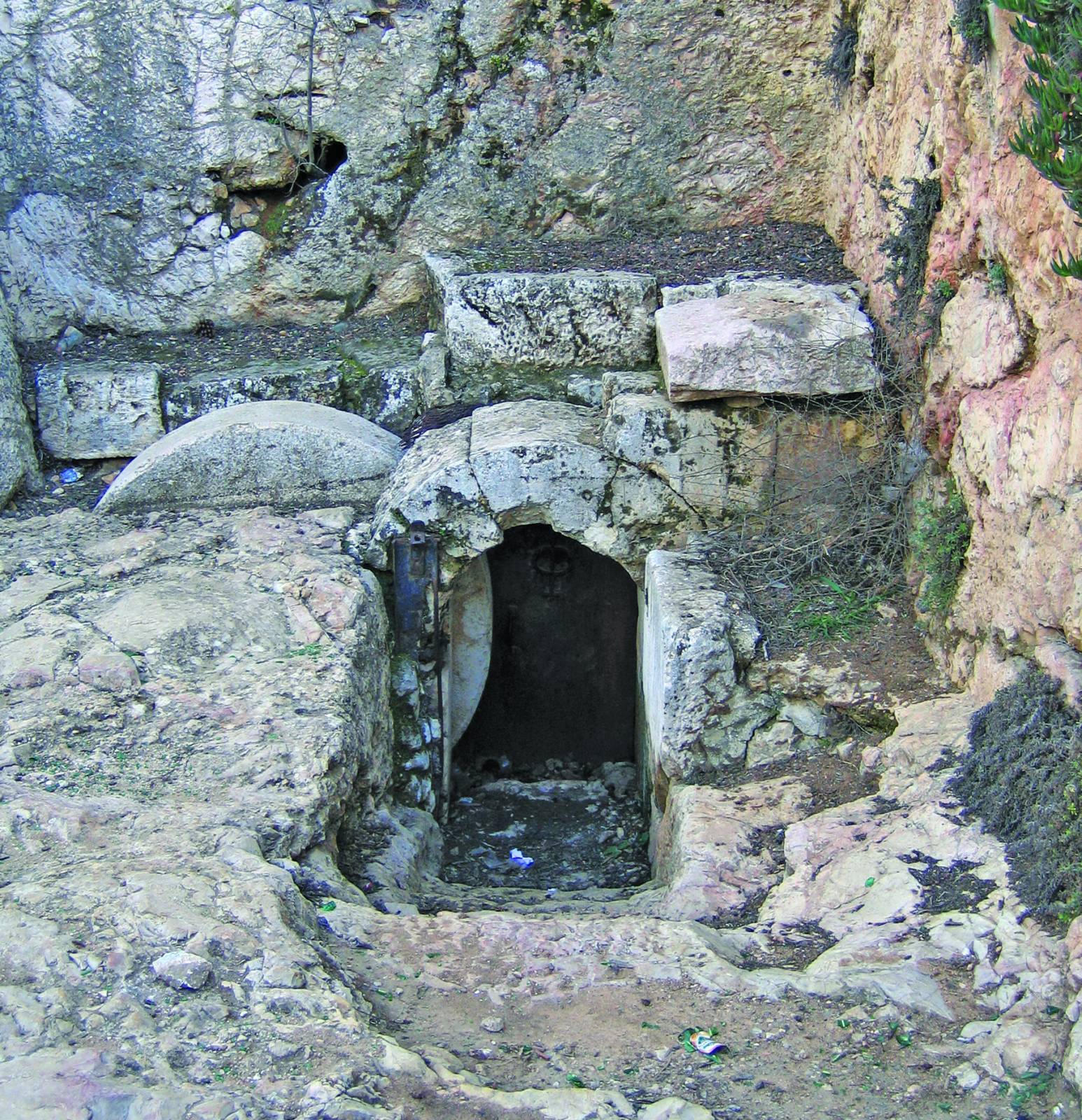 This first-century rock-cut tomb in Jerusalem, complete with a rolling stone, is located several blocks from the Old City. The low opening calls to mind John’s account of visits to the tomb by Peter and Mary Madgalene (John 20:5, 11). Scripture states that Peter and Mary each “bent over” to look into the tomb. Photo by Gary D. Myers

NEW ORLEANS – While the cross remains the undisputed symbol of Christianity; the empty tomb conveys the abundant life found in Christ.

The thought of Jesus stepping out of the tomb on the first Easter morning is simply overwhelming, representing His atoning death punctuated by the miracle of His resurrection.

As a believer, I have experienced the power of Jesus’ cross and His empty tomb and I don’t need to see the tomb to experience its power. But, as a student of the Bible and archaeology, I am compelled to learn as much as I can about the setting in which the Bible was written. So seeing the empty tomb in this context is an exciting thought.

Archaeology offers a wealth of contextual information about biblical places, events and people; however, it rarely offers proofs and such is the case with Jesus’ tomb.

Archaeology alone cannot lead to the tomb because it is not as simple as locating an empty tomb. Many empty tombs dot the landscape around Jerusalem – emptied by the ravages of time and human raiders.

With these limitations in mind, what can one learn from archaeology regarding the tomb of Jesus?

It turns out, quite a bit.

With a little help from early church writers, the difficulty of identifying the location of Jesus’ tomb eases significantly.

First and foremost, archaeology confirms that the Bible gives an accurate, though not exhaustive, description of a first century tomb.

John implies the visitors to the tomb had to stoop down to enter (John 20:5, 11). Three of the Gospels make it clear the tomb was new and had not been used for other burials (Matthew 27:60, Luke 23:53, John 19:41). This is an important distinction because tombs often included multiple burials (family tombs), and throughout time tombs from previous periods were reused.

In Archaeology & the New Testament, archaeologist John McRay wrote that rock-cut, two-chambered tombs were typical for burials in first-century Jerusalem. The entrances of these tombs typically were low and blocked by a large stone, he said. Furthermore, while many first-century tombs in Jerusalem have square blocking stones, he observed, examples of tombs with round blocking stones have been discovered, too.

NOT IN THE CITY

Archaeology instructs us to look outside the walls of Jerusalem for the sites of Jesus’ crucifixion and burial.

According to Jack Finegan, author of The Archeology of the New Testament, Jewish and Roman customs indicate that executions and burials took place beyond the city walls, again affirming the biblical account. John 19:17 notes “he went out to the place of the Skull,” and verse 20 places the crucifixion “near the city.” Likewise, Hebrews 13:12 records Jesus “suffered outside the city gate.” 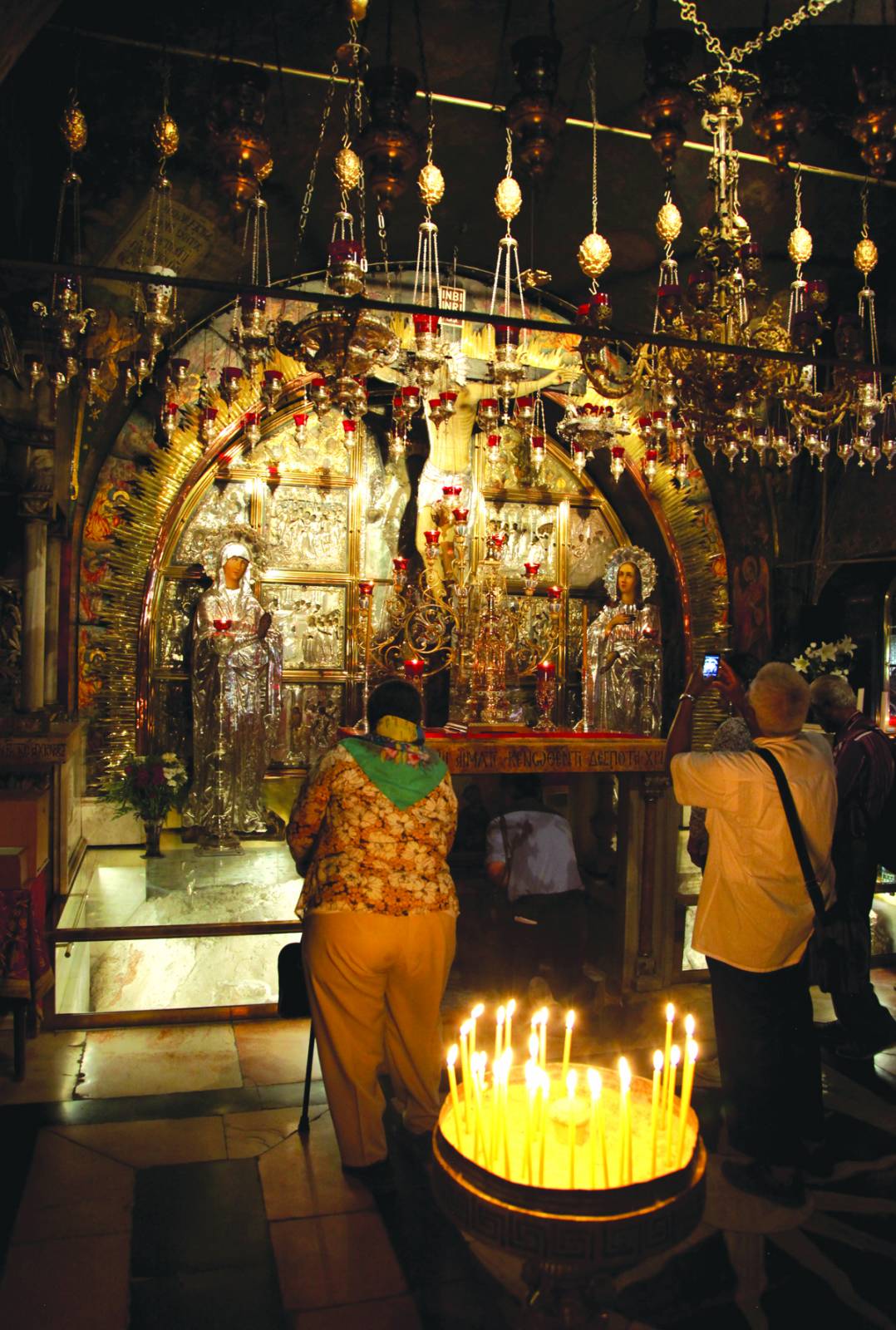 Visitors to the Church of the Holy Sepulchre look on as one pilgrim stoops down to touch the stone indention the church tradition identifies as the socket where Jesus’ cross was placed. Just left of the altar a portion of the presumed “Calvary” hill is visible. Photo by Gar D. Myers

Over the years, the two leading sites for Jesus’ burial and resurrection continue to be the Church of the Holy Sepulchre and the Garden Tomb.

Many believe the site is within the massive Church of the Holy Sepulchre, which covers the entire area thought to be the place of Jesus’ execution and burial. A smaller structure within, called the edicule (small house), actually contains the tomb. 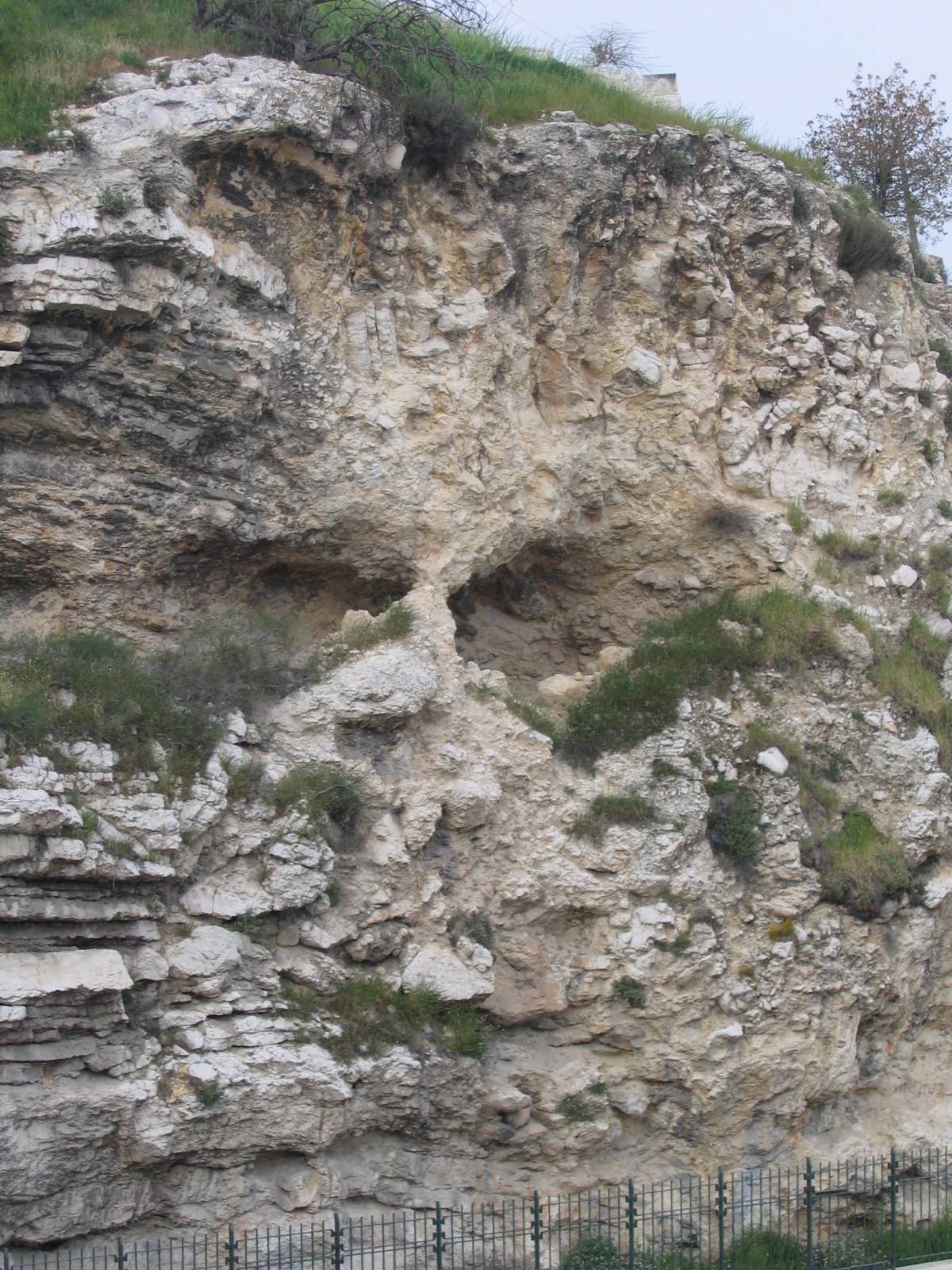 The cliff known as Gordon’s Calvary, located near the Garden Tomb, is one of the proposed locations for site of Jesus’ execution. Scholars, however, are skeptical that the cliff would have had the appearance of a skull 2,000 years ago. Photo by Gary D. Myers.

While portions of this hill supposed to be Calvary are yet visible, nothing resembling a rock-cut tomb is still discernible as the surfaces are covered with marble and completely enclosed by something resembling a small orthodox church. Indeed, the ornate religiosity of the site makes it an uncomfortable place for evangelical Christians, but it has been venerated since the earliest days of Christendom.

The Garden Tomb fits better with the evangelical concept of the garden burial mentioned in John 19:41. The peaceful setting includes a rock-cut tomb a short distance from a cliff which bears a striking resemblance to a skull.

First suggested as the location of Jesus’ burial in the 1870s, the simple, worshipful atmosphere with an easily accessible tomb makes the Garden Tomb a must-see stop for Christians visiting Jerusalem. Located outside the walls of the Old City, the Garden Tomb is a short walk from the Damascus Gate.

As a rock-cut tomb outside the city walls, the site fits the general parameters, but misses on an important one.

According to McRay, the Garden Tomb was carved some 600 years before the time of Jesus and then reworked and reused during the Byzantine period. In fact, he points out there are no first-century tombs in the general area.

On the other hand, while the original surfaces of the tomb within the edicule of the Church of the Holy Sepulchre are not easily dated because of the marble modifications, other tombs located within the church, some very close to the edicule, date to the first century. Also, although now located inside the current wall, it is well documented that Herod Agrippa I rebuilt and enlarged the city’s wall to encompass this area circa A.D. 44.

Other historical developments give further credence to this site. 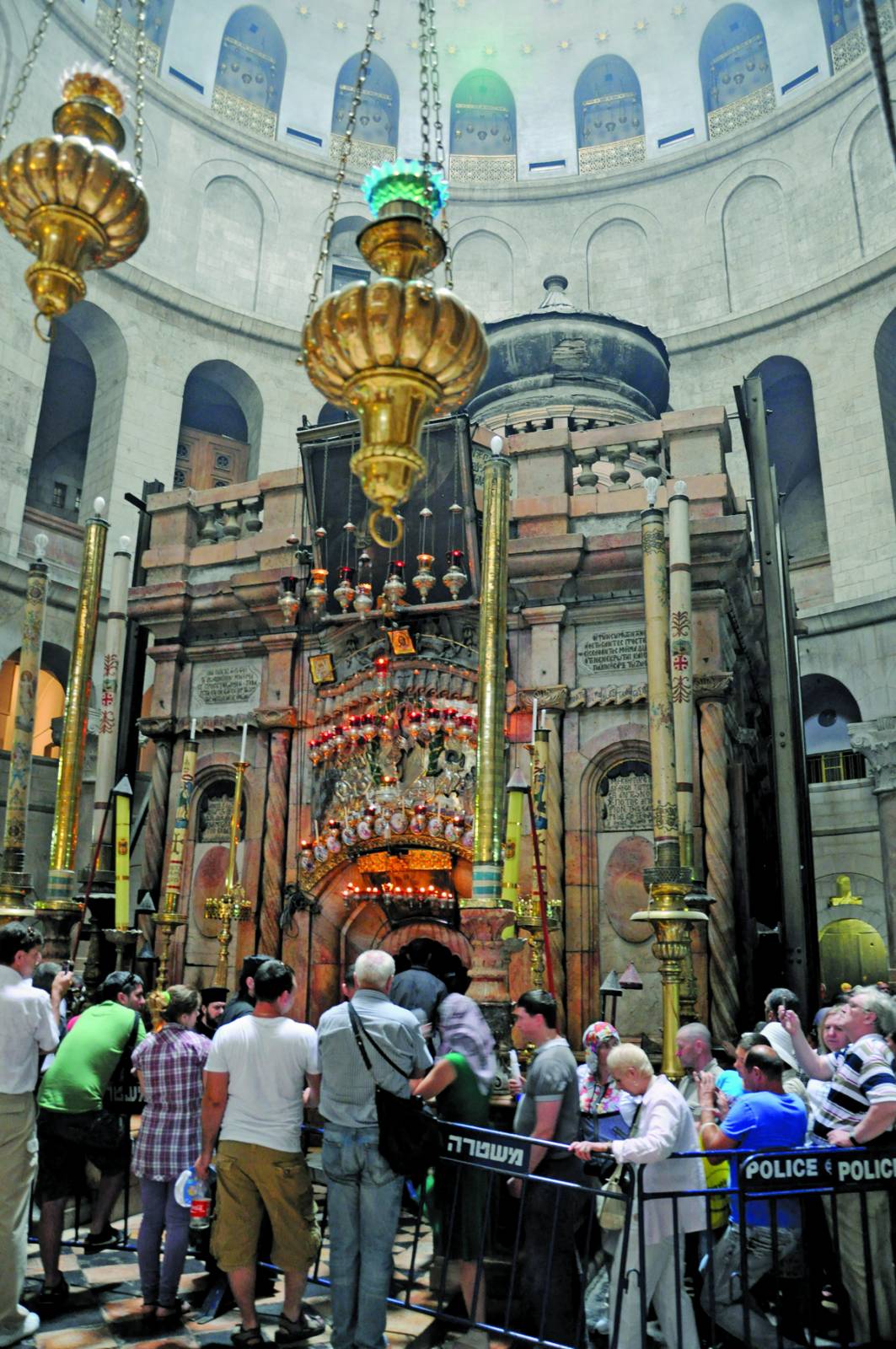 The edicule, a small structure inside the rotunda at Church of the Holy Sepulchre which resembles a Russian Orthodox church, covers the area thought to be the tomb of Jesus. The current edicule, built in 1809-10, is the fourth structure to cover the tomb. The first edicule was built in c. 325 by the Emperor Constantine. Photo by Gary D. Myers.

According to early church writers Eusebius and Jerome, Roman Emperor Hadrian (c. A.D. 135) constructed a pagan temple on the site and installed statues of Jupiter and Venus. Romans commonly built temples to their gods on sites venerated by local, conquered populations. So, construction of a pagan temple here hints that early Christians were venerating the site as early as 100 years after the resurrection.

Later, Constantine (c. A.D. 325) cleared the ruins of the pagan temple, found the tomb and built the first church and edicule at the site.

Cyril of Jerusalem mentions that some of original rock around the tomb was cut away during construction of Constantine’s edicule. Cyril also implies that he saw a rock-cut tomb before it was altered and adorned.

Later, more of the rock was cut away.

The current edicule built in 1809-10, is the fourth structure to cover the tomb.

Moreover, although the tomb’s surfaces were marred by the addition of a marble layer, possibly to protect the rock from visitors, the layout of a two-chambered tomb is preserved, and the back chamber includes a shelf or bench where Jesus’ body would have lain.

There are many variables, but compelling evidence points to the site’s validity and at the very least, Jesus was likely crucified and buried in the general vicinity of this long-venerated site. 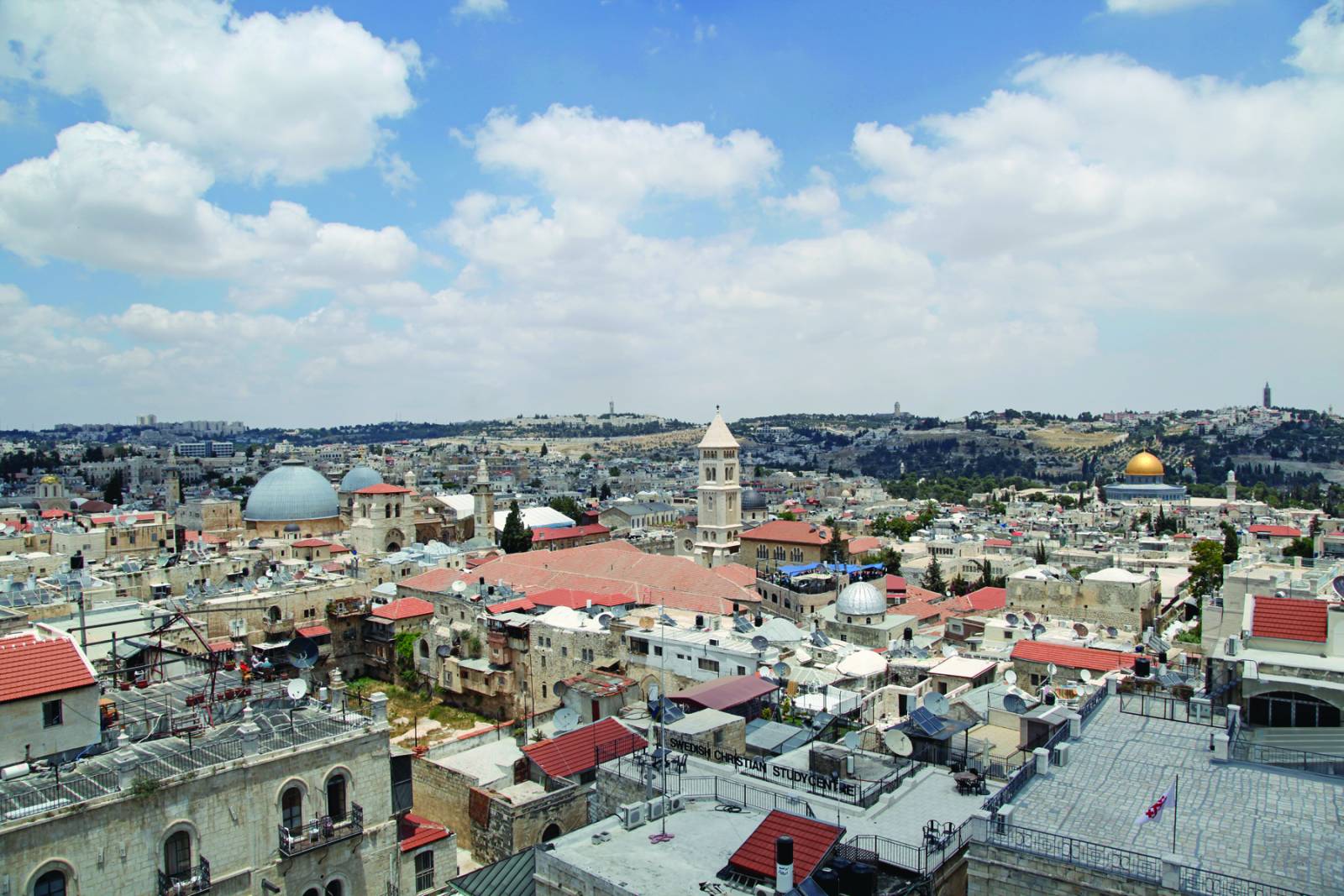 Evangelical Christians visiting Jerusalem, should take time to view both sites. Though the Garden Tomb can be ruled out as the location of Jesus’ burial, it does convey the idea of a rock-cut tomb and is a worshipful site well-worth seeing.

Also seek out some first-century tombs sealed with a rolling stone somewhere else in Jerusalem.

Then go to the Church of the Holy Sepulchre and look past the layers of gold, marble and iconography, to visualize the site of the resurrection.

Take time to experience the place known as Calvary then read the resurrection passages to enhance what you’ve known before.

Gary D. Myers is the director of public relations at New Orleans Baptist Theological Seminary and a Master of Arts (Biblical Archaeology) student at NOBTS. He has traveled extensively in Israel and has participated in archaeological excavations at Tel Gezer and Palmachim.