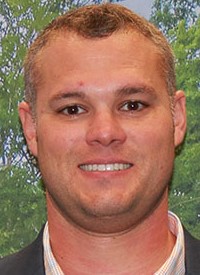 PINEVILLE, La. – What is old is new again for Andrew Maddox, as the Louisiana College alum and former Wildcat football player and defensive coordinator has returned to his old stomping grounds, named the sixth head coach of the LC football team in the modern era on Tuesday.

“My family and I are glad to be coming back to Pineville, a place we consider home,” said new Louisiana College head football coach Andrew Maddox. “We enjoyed our time here the first time. It’s exciting for us to see many familiar faces, but now we’re ready to get started working and get this program the best we can get it and heading in the right direction.”

President of Louisiana College Rick Brewer said, “At the top of my list of qualifications for our new head coach was that we sought a man of character and integrity, and Coach Maddox is all that and more. The successful candidate will be humble, hungry, and smart,” Brewer added while acknowledging Maddox’s attributes, saying he has the #AndThenSome traits that will bring success to the Wildcats football program. I have every confidence that Coach Maddox will develop the student-athletes under his supervision athletically, academically, and spiritually.”

Maddox later said, “If you hear nothing else today, hear this: God has been very, very good to me.”

Over the last two seasons, Maddox served as the head coach at Glenbrook High School in Minden, La. where he took over a team on the verge of being shut down and in two seasons guided the Apaches to a 6-4 record in 2019, their first winning season in six years, while making the playoffs both seasons of his tenure. For his efforts in 2019, he was named the Webster Parish Coach of the Year.

After five years in the U.S. Army stationed at Ft. Knox in Kentucky, Maddox came to Louisiana College as a student in 2013 and joined the Wildcats football program as a walk-on. He appeared in 13 games over his two seasons in the orange and blue, and the team amassed a 13-7 record while he was a LC student-athlete. Maddox graduated with a Bachelor of Arts in history and a minor in physical education in 2015.

Immediately upon receiving his degree, Maddox joined Coach Dennis Dunn’s staff as an assistant coach, focused on linemen of both sides of the line of scrimmage and aided with special teams and was key in recruiting. In three short seasons, he was elevated to defensive coordinator for the 2017 and 2018 seasons, where his defense was in the top 25 of NCAA Division III in turnovers forced. His defenses also accumulated 75 tackles for loss.

“I always look for three traits when hiring coaches at Louisiana College,” said Louisiana College Athletic Director and Head Men’s Basketball Coach Reni Mason, “the desire to get better every day, the ability to create expectations in spite of what the naked eye can’t see, and someone who loves Jesus. Coach Maddox fits the bill. During his interview, it was evident he is prepared and ready to go. We’re proud to welcome back Coach Maddox home to the Wildcat family.”

Maddox is married to his wife, Caitlyn, who is a teacher, and they have two children together, Allianna and Gabriel.

By Joe McKeever Freely you have received; freely give. (Matthew 10:8) JACKSON, Miss. (BP) -- Dr. Watson was complimenting Sherlock Holmes on a brilliant observation no one else had noticed. "Of course," Holmes remarked. "It's what I do." Forgiveness and grace -- that's what we believers do. Here is … END_OF_DOCUMENT_TOKEN_TO_BE_REPLACED