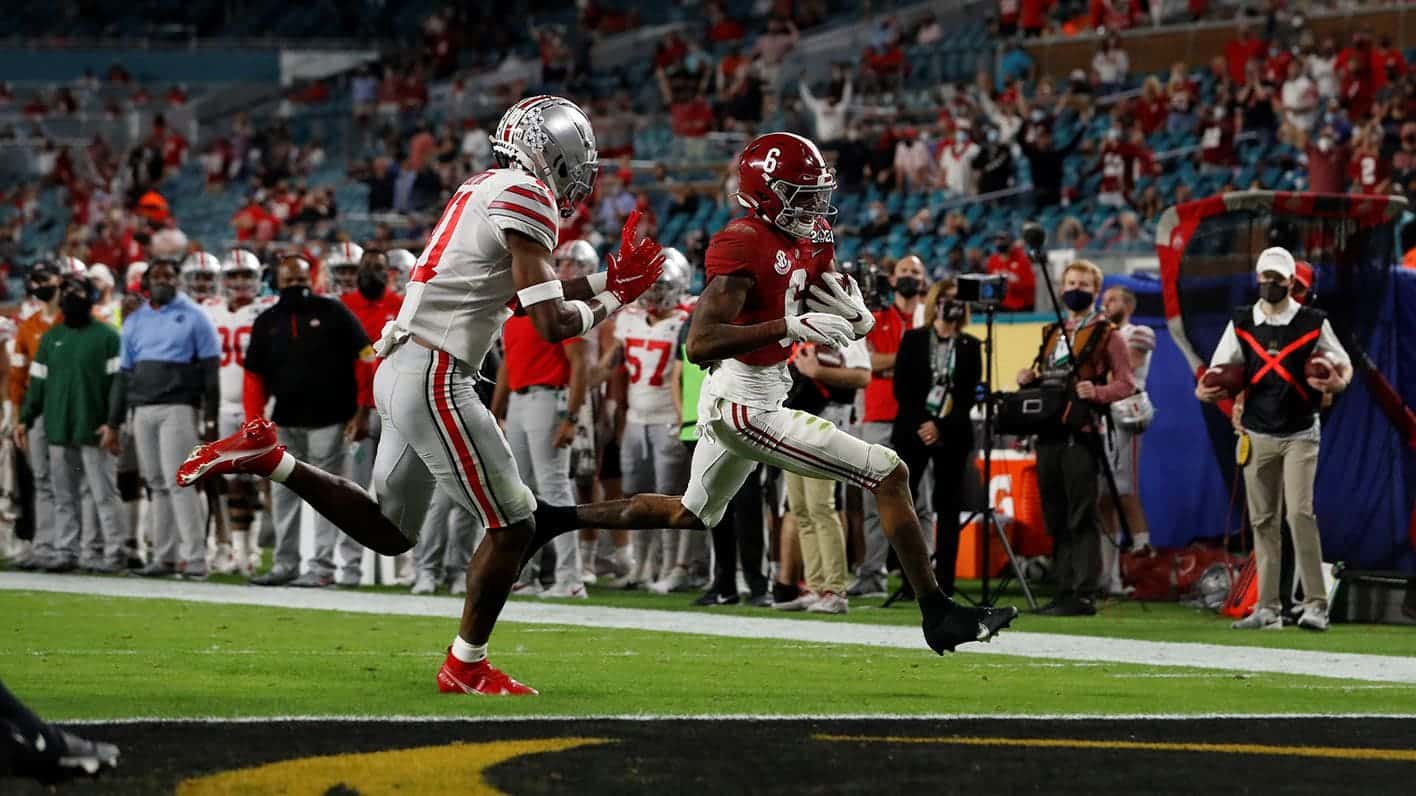 MIAMI, Fla. (LBM) – Devonta Smith’s stellar career with the Alabama Crimson Tide came to a close with a record-breaking performance in the national championship game Jan. 11, but in his postgame interview the former Amite High School star was quick to give credit to the Lord for his on-field success after a 52-24 win over Ohio State.

Smith, who was named the Offensive Most Valuable Player, set championship game records for the most receptions (12) and receiving touchdowns (3) while accounting for 215 of the Crimson Tide’s 464 receiving yards, all of which came in the first half, according to Alabama Sports Information statistics. He left early in the third quarter with an injury to a finger in his right hand.

“I wouldn’t be able to do any of this without my teammates or without God,” Smith said in the postgame interview. “I just put in the work every day no matter what the situation was, just believing in my coaches to put me in the right situations just to make plays.”

The week before, during the Heisman Trophy presentation, Smith gave credit to the Lord for helping him win the award given to the nation’s top college football player. Smith, who helped Amite win the Class 3A state title in 2016, is the second consecutive Heisman Trophy winner with ties to Louisiana. Joe Burrow, who led LSU to the national championship in 2020, won the award last year.

“First off, I would like to thank God,” Smith said during his acceptance speech, Jan. 5. “Without Him, none of this would be possible.”

Alabama Head Football Coach Nick Saban, in a postgame interview after the national championship game, said Smith was a major factor in the team’s success this season.

“You’re talking about the ultimate warrior, ultimate competitor,” Saban said. “I’m so happy for him that he was recognized as the best player in college football because I don’t think anybody’s done more for their team than he has for our team.”

This season, Smith posted 1,641 receiving yards on 105 receptions and caught 20 touchdown passes. Smith is just the fourth wide receiver to win the award, and the first since Michigan’s Desmond Howard in 1991, according to NCAA.com.

During an interview after the Heisman Trophy ceremony, his mother, Christina Smith-Sylve, urged her son to stay strong in His faith.

“Continue being humble, let God lead him, and we are here to support him every step of the way,” she said.

Zephaniah Powell, the head football coach for Amite High School, said Smith has a strong faith-based foundation that was passed on to him from his family.

“They are true believers in our Lord and Savior and trust God in all that they do,” Powell told the Baptist Message. “He has a great head on his shoulders and very mature for his age. And he loves to help people and gives back to the community.”

By Joe McKeever “‘…your ways are not my ways,’ saith the Lord.”  (Isaiah 55:8) Keep an eye on how the Lord works in your life. You might learn something useful for the next time He wants to use you. This little couplet seems to sum up 90 percent of what Scripture and life teach us concerning the operation … END_OF_DOCUMENT_TOKEN_TO_BE_REPLACED