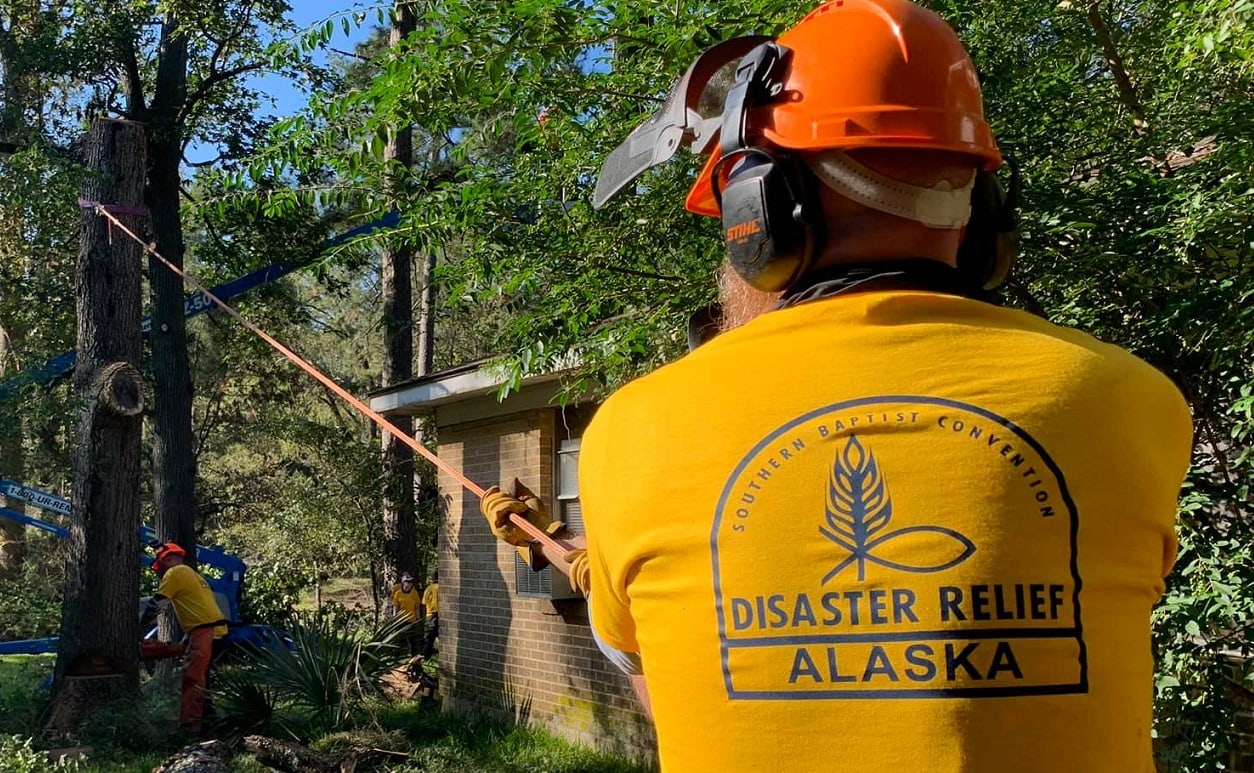 ALEXANDRIA, La. (LBM) – University of Alaska-Anchorage Mosaic campus ministry director Scott Belmore was glued to his television screen in late August as he watched footage of the devastation caused by Hurricane Laura in his native state.

Belmore, who previously served as the director of the Baptist Collegiate Ministry at the University of Louisiana-Lafayette from 2005 to 2013, wanted to do something to aid those impacted by the storm. So he contacted Louisiana Baptist Disaster Relief officials to find out how he could help.

By late October, Belmore and seven students from Mosaic (an Alaska Baptist Resource Network ministry that is similar to a BCM) packed their bags and traveled to Louisiana to serve as an Alaska Baptist Disaster Relief team. Throughout Oct. 18-25 they removed trees that had fallen on homes and cleared debris that was scattered across properties throughout Rapides Parish. But more importantly, they shared the hope found in Jesus with the 17 homeowners they encountered.

Among those blessed by the Mosaic team were Rebekah and Jeremy Buckels, members of Calvary Baptist Church, Alexandria, who lost 30 trees to Hurricane Laura and then had two inches of water flood their home during Hurricane Delta. Rebekah has known Belmore since they were teenagers residing in Lafayette, and she and Jeremy were thrilled that Belmore and the students were able to come to their assistance.

“Scott and his team were able to, in one day, cut up several large trees and remove dangling branches, freeing us up to work on our flooded house,” she said. “We are extremely grateful to the team for blessing our family with their service. They truly exemplified serving as the hands and feet of Jesus.”

Belmore was overjoyed to see his students enthusiastically serve those in his home state.

“I wanted to introduce them to missions, and disaster relief plays a role in that,” Belmore told the Baptist Message. “They needed to come down to serve people in the community that are hurting and broken right now because of the devastation that is taking place to their homes and families. I knew that we needed to do something to put these students out in a place that is going to stretch them and grow them in their faith.”

The students not only worked long hours during the day at job sites, but in the evening they completed classwork at their host church, Philadelphia Baptist Church Horseshoe Drive in Alexandria. Due to COVID-19, UA-A has moved to a virtual classroom model and this allowed Mosaic members to work in Louisiana and participate in classes, too.

Kaysie Rich said despite the challenges presented with schoolwork and a three-hour difference in time zones, the blessings she received outweighed any inconveniences.

“It’s been very humbling,” Rich said. “We have natural disasters in Alaska but we don’t have hurricanes, and we typically don’t have trees falling on our homes. The relief that we are bringing these people, the love of Jesus Christ that we bring to these people — they are so grateful. I don’t think anybody really realizes how much people appreciate this kind of ministry until your feet are on the ground and doing it. There are no words to describe it, just an overwhelming feeling.”

Clinton Boyer said he was reminded of how blessed he is to have housing and food.

“I never thought about the aspect that you can’t sleep peacefully at night with four trees on the house — afraid it would cave in,” he said. “It’s a different kind of experience to give somebody peace of mind to sleep through the night.”

Caleb Copp was impressed with the teams who cooked, did laundry and helped with other tasks so their team could minister.

“It’s also awesome to see homeowners really excited about trees taken off their houses or a giant limb that was this time bomb waiting to go through someone’s roof. It’s a cool way to bless people.”

By Joe McKeever “‘…your ways are not my ways,’ saith the Lord.”  (Isaiah 55:8) Keep an eye on how the Lord works in your life. You might learn something useful for the next time He wants to use you. This little couplet seems to sum up 90 percent of what Scripture and life teach us concerning the operation … END_OF_DOCUMENT_TOKEN_TO_BE_REPLACED