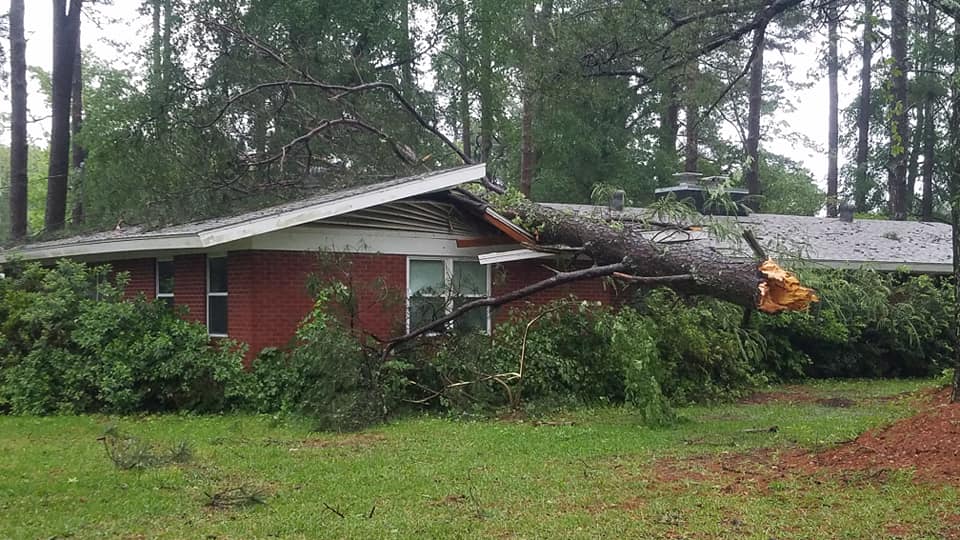 A tree fell on this home house in the 1200 block of Old Plain Dealing Road in Bossier Parish during the severe storm system they came through the area Wednesday, May 8. Bossier Parish Sheriff's Office photo

Hours after a round of powerful storms moved across the state, Louisiana Baptists Disaster Relief crews were on the ground Thursday, May 9.

The storm also damaged the home of Chad McClurg, the Baptist Collegiate Ministry director at the University of Louisiana-Monroe. According to a Facebook post by LSU BCM Director Steve Masters, McClurg was in his house when the tree fell onto his home in Monroe, but he was not injured.

Masters posted that McClurg’s homeowners’ insurance will cover the damages, but he will have to pay a deductible. Contributions can be made by sending a personal check to 1005 University Avenue, Monroe, Louisiana 71203. 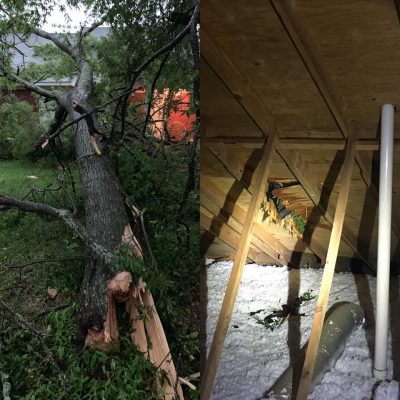 The home of Chad McClurg, BCM director at the University of Louisiana-Monroe, was damaged Wednesday, May 8, 2019, after a powerful storm passed through Monroe. Facebook photo

A tornado was preliminary reported to have touched down in Jonesboro. Other locations where a tornado possibly touched down included the Panola County, Texas-Caddo Parish, Louisiana line; southeast of Stonewall; near Robeline; and south of Ruston.

Additional tornadoes were preliminarily reported north of Marshall, Texas, and Columbia and Union counties in Arkansas. National Weather Service crews expect to survey the areas to confirm the tornadoes.

While no fatalities have been reported with this latest line of severe weather, there are a number of trees down, flooding, and road closures.

Several roadways were flooded Thursday as water covered the roads, including part of Interstate 20 near Greenwood that closed for a few hours. Several employees of a Love’s Truck Stop near the interstate were briefly trapped by floodwaters from a creek that surrounded the building.

Accuweather.com reported a possible tornado destroyed a trailer home in Ruston, a city that saw an EF-3 tornado touch down April 26.

Nearly 31,000 customers in Louisiana remained without electricity at 10:45 a.m. Thursday, according to poweroutage.us. Much of the state remains under a flash flood watch with more storms expected through Sunday.

By Lane Corley Olive trees produce one of the most desired and sought after fruits around the world. The trees can live for thousands of years. The olive and the olive tree is spoke of in the Bible on numerous occasions. Including a few references to family life, like in Psalms 128:3 – “Your children will be … END_OF_DOCUMENT_TOKEN_TO_BE_REPLACED