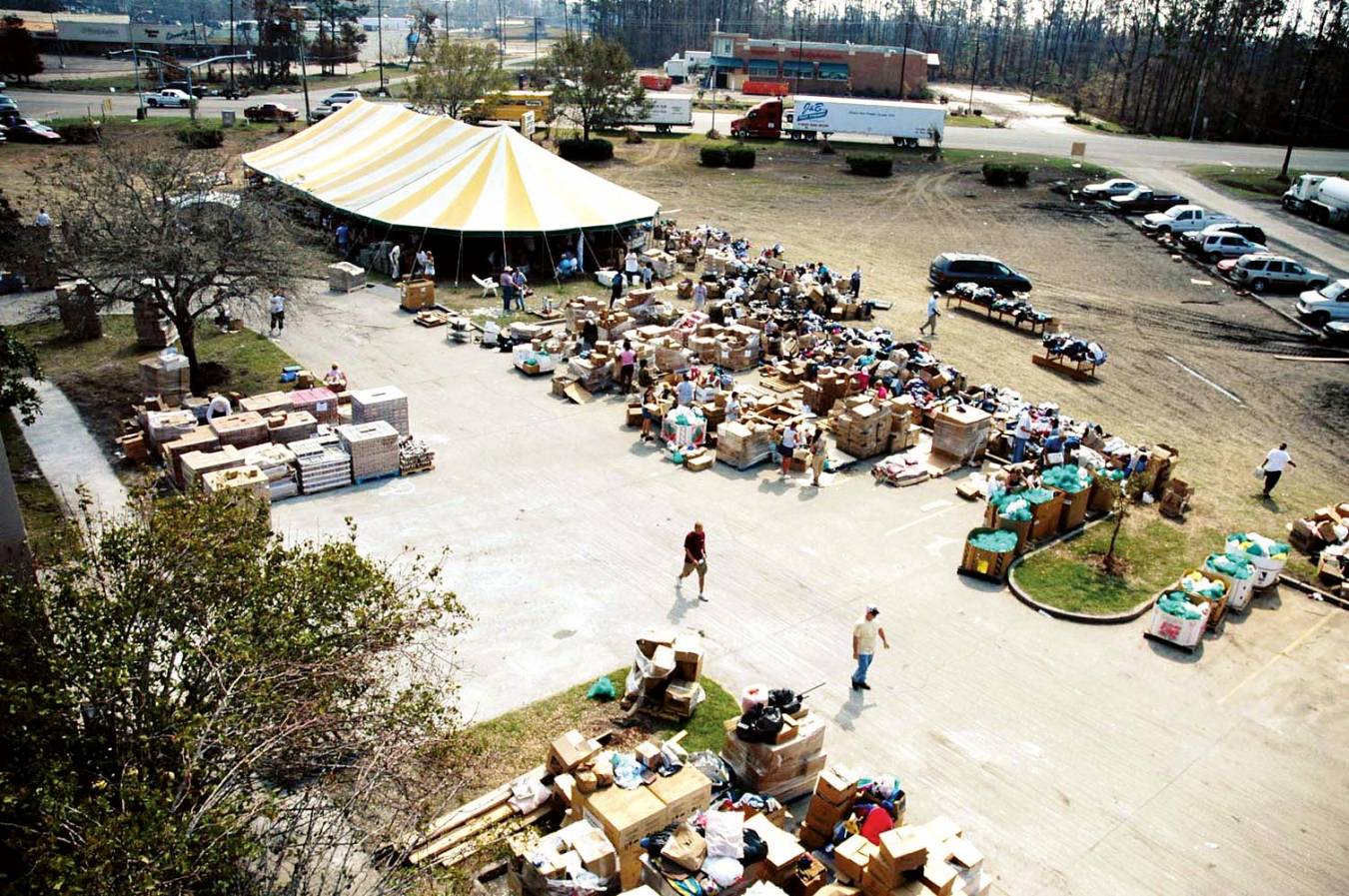 NEW ORLEANS – Genesis 1:2 recounts: “Now the earth was formless and empty, darkness was over the surface of the deep, and the Spirit of God was hovering over the waters.”

Here in New Orleans nearly 10 years ago, shapes were buried in the water; large colorful forms distorted by shimmering waves lined the neutral ground of West End Boulevard for miles.

Ahead was the ribbon of Interstate 610 with the facilities of First Baptist New Orleans just beyond. We would soon set down the helicopter on a section of the parking lot that had emerged from the flood. Eleven days after the storm the church facility was an island in the sea.

To the right was the 17th Street Canal that failed in the storm. Lake Pontchartrain lay behind us to the north. To the left, looking east, the city of New Orleans glistened in the floodwaters as far as the eye could see.

A parade of military helicopters thumped the air along the perimeter of the south shore of the lake. Enormous bags of sand swung beneath them, part of a futile effort to plug the hole in the levee and stop the sea’s invasion of the city.

“Cars,” I said to myself and then to the pilot over the headphones. “Those are cars beneath the surface.”

In 10 days West End Boulevard would finally be dry. In six months its entire three-mile median, almost a thousand feet wide, would become a dump site segregated into ruined appliances, trees and vegetation, furniture and household goods, and the debris of gutted houses insulation, sheetrock and lumber. The piles would be 30 feet high stretching from side to side and running the entire length of the median.

I followed two soldiers with lights on their M-16 rifles. Electricity would not be restored for months. They entered every room in the church facility before they gave me permission to retrieve the things I needed. We found two dogs in the preschool area with their food scattered in the lobby. Someone who slept on my office couch had scrawled a thank you note and left a telephone number on a chalkboard.

Half of my staff did not return. I know they did the right thing. Half of the congregation relocated permanently. I thought about it. But I strapped myself in literally and figuratively when we lifted off the parking lot for the return flight back to Texas.

The Spirit of God hovered over the floodwaters on that day so filled with shock and awe. Anticipation rattled around in my soul, though I could not identify it on the helicopter flight. I was overwhelmed, but God was up to something. I was tumbling in the hurricane, but God, who rides upon the storm, was about to create something out of the chaos.

More than a million volunteers flooded into the Gulf Coast in those first 30 months after Hurricane Katrina’s landfall on Aug. 29, 2005. The Red Cross mounted the largest relief effort in its 124-year history, receiving and spending nearly $2.2 billion for Katrina relief (see www.redcross.org, “Unprecedented Disaster”).

Hundreds of thousands of church members from thousands of churches came to help the people of New Orleans in the wake of the storm. I suspect it was the greatest effort of voluntary assistance in the history of the American church and surely the greatest in the history of my own denomination. Our church facility, like many others, became a disaster relief center with the Red Cross, the Salvation Army and Southern Baptist Disaster Relief, the “yellow caps,” working together to serve thousands of meals and distribute tons of water, food and cleaning supplies.

I rode the wave of Katrina into a new perspective on the work of Christ’s church. This great disaster means in part that God has given our city and its churches special attention for His own eternal purpose. He only chastens those He loves.

“Katrina” means purification. I have come to believe that God was purifying His church in the midst of this storm. The flood did not touch Bourbon Street and the famous flesh markets of our city. Rather, the flood destroyed hundreds of houses of worship and the homes of thousands of the faithful.

And the storm washed us out of our pews and into the streets and lanes of our city. This is the revival of true faith that has already happened and continues to this day in the city of New Orleans and across the nation. Thousands of congregations are rediscovering the central role of deeds of compassion in their faith journey. Young believers in our churches are drawn to this “hands-on” ministry that incarnates the Good News in the places where they live and work.

Words alone are not enough. The Word must be made flesh. A revival of faithfulness to the central command of Jesus – “love your neighbor” – that is what God has brought forth from the great flood.

By Steve Horn ALEXANDRIA, La. - At the risk of sounding like the cartoon character, The Born Loser, I confess to you that I’ve had my share of losing. In four seasons as a high school football player for example, we won 6 of 40 games and 2 of those 6 were taken away for using an ineligible player. I’m not … END_OF_DOCUMENT_TOKEN_TO_BE_REPLACED