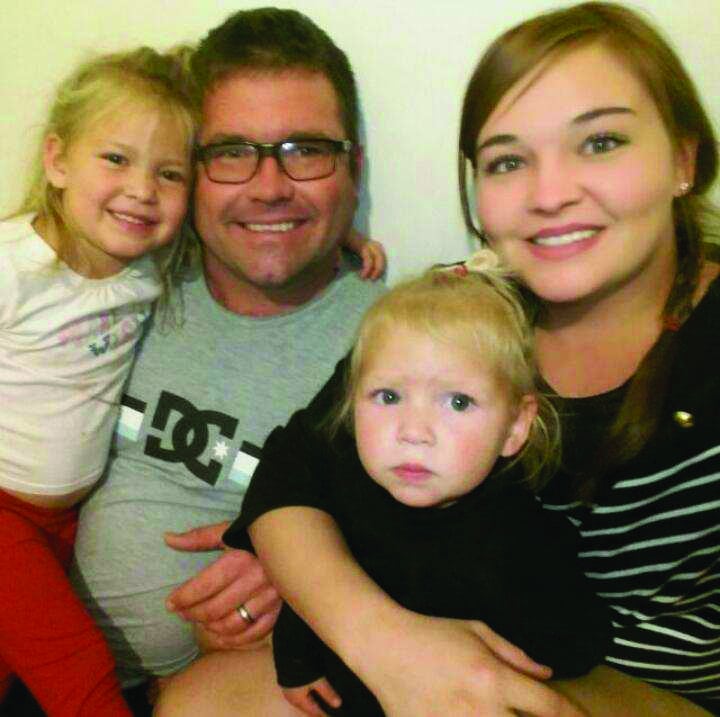 Gerhard Liebenberg and his family left a potentially dangerous situation in Africa to come to America to start a new life.

THERIOT, La. (LBM) – God’s protection and provision enabled Gerhard Liebenberg and his family to start a new life in America after facing racial conflicts because of land reform in Namibia (a Marxist country in Africa with deep ties to China), where millions of acres farmed by whites (a relatively wealthy minority in the country) are being confiscated to benefit disadvantaged blacks (who were displaced from their ancestral lands 125 years ago).

“God took us out of Africa and put us in the swamps of Louisiana. God is blessing us day by day and I hope to tell as many people as possible our story,” Liebenberg, who now lives in Houma, said.

Liebenberg said the Lord has blessed him with a job running a sawmill and his wife, Anja, with an office position. They, along with their two daughters, Zita, age 4, and Jana, age 2, have found a church family in the Bayou Dularge Baptist Church.

“I had never heard of a Baptist church before we moved here,” Liebenberg revealed. “But they have welcomed us, and they are like a family we’ve had our whole life. We prayed for God to send us to a place where we can do His work, not for us, but for His glory.”

Twice Liebenberg has been able to preach at Bayou Dularge, and, he has been able to minister to members of the community who are dealing with drug and alcohol addictions as well as to others who are suffering abuse.

“God has put me in a place where I can share our story of how we came over here, and God has used that to change a lot of people’s mindset of ‘having it bad.’ Where we are from, it was really bad. The media is not portraying it right. They are saying it’s utopia after apartheid, but it is not. But I’ve been able to share how we put everything in God’s hands, and He made this amazing blessing for us,” Liebenberg said.

Born in Namibia, located north of South Africa, Liebenberg grew up on a 7,000-acre farm. His family raised sheep, cattle and African wildlife like antelopes. He went to school in Namibia until he turned 13 years old. Then he attended a boarding school in the neighboring country of South Africa.

There was a lot of political unrest in Namibia as it was a time when the policies of apartheid, a system of segregation based on race, ended. During this time many of the farms in Namibia were being attacked.

“My dad’s farm was attacked. They nearly beat my dad to death. They stole our cars and shot at the workers. It was a political attack,” Liebenberg, who was away at school, recalled.

“It was an extremely dangerous time for farmers in South Africa and Namibia. People were getting killed and dragged off,” he recounted. “Women were raped and severely beaten.”

His father had farmed his land for 45 years but was forced to give it up. Liebenberg said his father got a waiver from the government to sell the land, and afterward moved his family to the city of Omaruru. There his father bought them a house and started a business that trucked fish to the Congo, Tanzania and South Africa.

At age 15, Liebenberg, who has dyslexia, quit school to start working with his father. He said it was very difficult to get a job at that time.

“Nobody in the world wanted us Afrikaans,” he offered. “I was existing … living in the world. But I had no faith. I worked with my dad until I was 21,” he said.

He was able to get training and began working as a game ranger and a safari tour guide on a 71,000-acre big game reserve; and, it was here that he met his future wife, Anja. She worked in the office and booked guests for a safari to see the elephants, rhinos and tigers. The two married in 2014.

The couple moved to Outjo in Namibia and decided to start their own dairy farm, leasing some land and starting their operations with 20 Jersey cows.

“We tried to keep our farm small so we could be ‘under the radar.’ We were so small the government officials did not bother us,” he explained. “But there was a very big drought. We had about 3 inches of rain that whole year. Food costs were sky high for the cattle, so we had to shut the dairy down. The farms in the area are very isolated, and we operated with cash. People knew that, so that was a concern too.”

He then started working on a rhinoceros reserve. When he was 28 years old, a friend invited him to a “hunting breakaway” trip for men.

“At that mission camp, the Lord took my heart and completely changed my life. On the first day we jogged with a tire, which represented your sin. There were hundreds of men that got saved. I was one of them, and I got baptized. I changed so much after that weekend. My wife thought light came into our home,” Liebenberg recalled.

Shortly afterward, the couple bought some property and began a new dairy farm with 13 Jersey cows. But troubles came their way again.

“We got really scared because the government started implementing ‘land appropriation without compensation,’” Liebenberg said. “They take 25 percent of your business and give it to someone they want to have it. They don’t pay you nothing. There will probably be a civil war soon.”

“We had no money. We lost our medical aid and you couldn’t go to a state hospital. It was very bad,” he described. “We had a failing dairy farm, another terrible drought, feed cost was too much, and the fear of a farm attack grew every night. But God used all these problems.”

Liebenberg said they were living in fear and could not see a way out of their desperate situation.

“No doors we could open ourselves,” he said. “We couldn’t get out of the situation we were in.

“I knew God had a calling on my life to not just farm, but to work for the Lord. We prayed for God to give us a way out and to open doors for something He would want us to do,” Liebenberg declared.

With relatives in Australia and Canada, Liebenberg said they thought about moving to one of those countries. But he said they just lost more money when that plan failed. He felt impressed by the Lord to fast and pray for direction.

“I told Anja if it worked in the Bible, it’ll work for us. We fasted 24 hours and prayed for a miracle,” Liebenberg said, adding that they planned to stop the fast at 9 p.m. that night.

But their miracle did not come yet, so Liebenberg said they kept fasting and praying.

“At 9:15 p.m., the phone rang. It was my pastor,” he said, describing how he had submitted his résumé to the pastor to give out if God directed him.

One of the pastor’s daughters had a friend who lived in Dubai who had friends in America who had two jobs to fill and that Liebenberg could choose which job he wanted.

“For somebody in Africa on a farm to get two job offers in America is unheard of in Africa. We tried everything and it did not work. But when we asked God sincerely, He supplied and gave us this. I let go and let God,” Liebenberg said.

Usually it takes months to get a visa to travel to America, but Liebenberg said he was able to obtain his in two days. Moreover, his flight to Louisiana was fully paid for by his new boss. On top of that his family was provided a home on 40 acres.

“This is the first time we are seeing the blessings of God in our lives, and we want to tell everybody,” Liebenberg said joyfully, adding that his church family has provided furniture and stocked his freezer with deer meat and fish.

God provides, Liebenberg said, noting that he hopes to have a platform to share his testimony. The Lord offers hope to a dying world, he said, and that in this climate of fear caused by the coronavirus, it is time for people to turn back to God.

By Joe McKeever “‘…your ways are not my ways,’ saith the Lord.”  (Isaiah 55:8) Keep an eye on how the Lord works in your life. You might learn something useful for the next time He wants to use you. This little couplet seems to sum up 90 percent of what Scripture and life teach us concerning the operation … END_OF_DOCUMENT_TOKEN_TO_BE_REPLACED