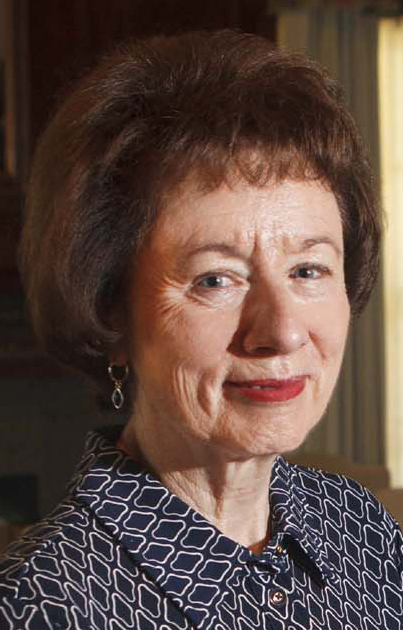 FORT WORTH, Texas (BP) – A blond-headed, blue-eyed daughter, I looked like the perfect blend of my mother and father.

As others commented on the likeness, my parents smiled inwardly knowing that it was their heavenly Father who had chosen the custom matching of their adopted daughter as He had “made a home for the lonely” (Psalm 68:6 NASB), or as the King James Version puts it, “God setteth the solitary in families.”

Oliver and Mary Ennis were older when they commenced the adoption process and were willing to commit to nurturing a child. Eventually they welcomed an abandoned child with pneumonia to their home. She had lain so long on her back that the back of her head was bald. I was that abandoned child.

Many children spend many years with one or both parents. My parents knew they likely wouldn’t enjoy the normal number, so they maximized each to its fullest.

Celebrations were important in the Ennis home. I recall well the January 31st when I arrived at home and found the dining room table set with Mom’s best linen and china. Lying across my bed was a new “fancy” dress, and my favorite black patent leather shoes were awaiting my feet. I was 10. Without giving extensive details — my parents explained many things but did not feel obligated to make a child understand all adult decisions — I was helped to dress for dinner.

Dad arrived in his best suit, and a special dinner was served. He then began the explanation for the celebration — January 31st was the day they had brought me home from the hospital, six months after my birth. I was not their birth child but very special because they had chosen me.

Dad’s explanation made the subsequent transition to salvation smooth. Salvation was like being adopted into God’s family. How could I not desire heavenly adoption when my earthly adoption was so wonderful?

The biblical basis for adoption is concisely stated in James 1:27: “Religion that is pure and undefiled before God and the Father is this: to visit orphans and widows in their affliction, and to keep oneself unstained from the world.”

John MacArthur writes in The MacArthur Study Bible, “James picks two synonymous adjectives to define the most spotless kind of religious faith — that which is measured by compassionate love (cf. 1 John 13:35), orphans and widows. Those without parents or husbands were and are an especially needy segment of the church. Since they are usually unable to reciprocate in any way, caring for them clearly demonstrates true, sacrificial, Christian love.”

Adoption means to “legally take another’s child and bring it up as one’s own,” as Webster’s College Dictionary, Second Edition, defines it.

Since Christians are, through God’s grace, accepted into His family without limitation or restriction and enjoy all of the rights and privileges bestowed upon His children, they should readily grasp the concept of adoption. Ephesians 1:5 clearly states that “He predestined us for adoption as sons through Jesus Christ, according to the purpose of His will.” Considering the theological basis of adoption assists the believer in comprehending that the goal of adoption is that the glory of God’s grace is exhibited.

Adoption imagery is infused throughout the New Testament. John 1:12-13 affirms, “But to all who did receive him, who believed in his name, he gave the right to become children of God, who were born, not of blood nor of the will of the flesh nor of the will of man, but of God.”

Writing to the Romans, the apostle Paul states, “For you did not receive the spirit of slavery to fall back into fear, but you have received the Spirit of adoption as sons, by whom we cry, ‘Abba! Father!’ The Spirit himself bears witness with our spirit that we are children of God, and if children, then heirs — heirs of God, and fellow heirs with Christ, provided we suffer with him in order that we may also be glorified with him (Romans 8:15-17).

Examples of adoption, or something parallel to it, are woven throughout Scripture:

— Samuel was left in the care of Eli the high priest rather than being nurtured by his biological mother, Hannah (1 Samuel 1:1-2-2:21).

— Esther was adopted as a child by her adult cousin, Mordecai (Esther 2:7).

The placement of “solitary” individuals into families was a part of God’s sovereign plan. A journey through the Scriptures teaches us that:

— There is significant financial and emotional expense associated with adoption. However, those expenses are insignificant when compared with the costliness of a believer’s adoption into God’s eternal family (Galatians 3:13, 4:4-5).

— The process of legal adoption requires careful planning and execution of myriad legal formalities. This detailed process is a reminder that the heavenly Father planned far in advance for our adoption — He predestined us for adoption before the creation of the world (Ephesians 1:4-6).

— Most children available for adoption need to be rescued from precarious situations. Often they are difficult to deal with. Such was our state when God adopted you and me. Adoption is a reminder that by nature we are children of wrath (Ephesians 2:3). Though the distance between who God is and what we are is great, He still chooses to adopt us into His family.

— Legally adopted children have the privilege of receiving full rights of inheritance from their parents. This legal privilege prompts believers to recall that God appointed His Son to be heir of all things (Hebrews 1:2). Every child adopted into God’s family is a joint heir with Christ (Romans 8:16-17).

The concept of placing “the solitary” in families has strong implications for the 21st century Christian community.

Adoption is an issue that is on the heart of God. Reflecting again on James 1:27, we are reminded that “religion that is pure and undefiled before God and the Father is this: to visit orphans and widows in their affliction.” Practically speaking, this means reaching down to the abandoned person who is helpless and may die without our physical care and spiritual nurturing.

Orphans teach you about the love of God, call you to sacrifice and challenge you to value Christ-likeness above your comfort. Not everyone is called to adopt, but within the Christian community there are probably more individuals who should consider it. Are you willing to ask your heavenly Father, “What do you have for me in relation to adoption?” His response might change the course of your life.

Pat Ennis, on the Web at http://theeverydayhomemaker.com, is a distinguished professor of homemaking and director of homemaking programs at Southwestern Baptist Theological Seminary in Fort Worth, Texas. Her most recent release is “God is my Strength: Fifty Biblical Responses to Issues Facing Women Today” (Christian Focus, 2015). This column is reprinted from the Biblical Woman website, www.biblicalwoman.com, of Southwestern Seminary.

By Stewart Holloway PINEVILLE, La. (LBM) - For over two months now, my oldest son, my mom, and I have spent most Friday mornings at my mom’s clearing overgrown brush. What was planted as a fruit orchard in an open pasture almost thirty years ago has grown into a wilderness of every kind of vine and tree … END_OF_DOCUMENT_TOKEN_TO_BE_REPLACED