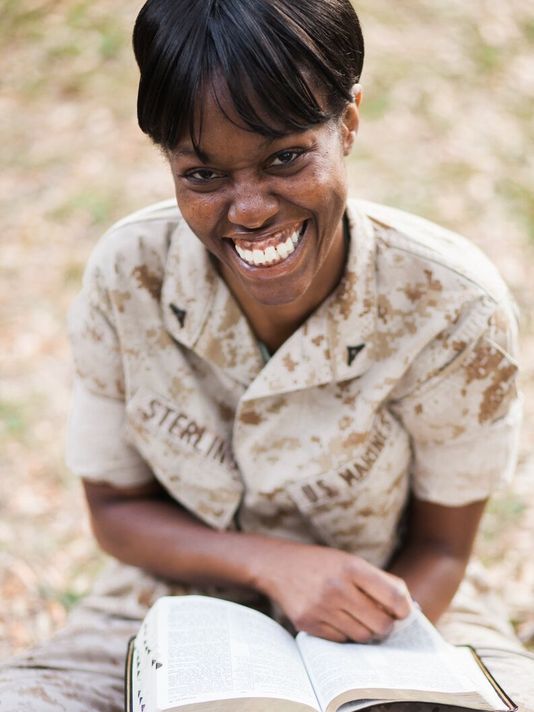 WASHINGTON – Alliance Defending Freedom and the Chaplain Alliance for Religious Liberty have filed a friend-of-the-court brief with the U.S. Court of Appeals for the Armed Forces in support of a Marine court-martialed for posting a Bible verse in her workspace.

Lance Cpl. Monifa Sterling posted the verse “No weapons formed against me shall prosper,” a reference to Isaiah 54:17, three times around her workspace at Camp Lejeune, N.C., in honor of the Trinity. Her supervisor said, “I don’t like the tone,” and told her to take them down.

When Sterling declined, her supervisor took them down at the end of the duty day. Sterling reprinted and re-posted the messages, but she found them in the trash the next morning. She was then court-martialed.

“No one in our military who goes to work every day to defend our freedoms should then be court-martialed for exercising those very freedoms,” said ADF Legal Counsel and Director of Military Affairs Daniel Briggs, a former Air Force JAG officer. “This case is about Monifa, but it is also about every American who puts on the uniform in service to this country. The question is whether they will be allowed to exercise their faith in the military, or whether they will be denied the same constitutionally protected freedoms they have volunteered to defend and are willing to die for.”

The brief filed in United States v. Sterling argues that the Navy-Marine Corps Court of Criminal Appeals so narrowly construed the protections of the federal Religious Freedom Restoration Act that the court left Sterling no defense under the law, which does, in fact, protect her.

“If the lower court’s ruling is left unchanged,” the brief explains, “religious freedom will be subject to the whims of military supervisors and a chilling effect will sweep across the military, contrary to clear Congressional intent and Constitutional directive. The opinion by the Navy-Marine Corps Court of Criminal Appeals (NMCCA) should be reversed….”

“Lawful orders cannot ‘interfere with private rights or personal affairs’ without ‘a valid military purpose…,’” the brief continues. “Here, the orders clearly lacked a valid military purpose for broadly restricting [Sterling]’s private rights and personal affairs. The orders were not related to mission accomplishment or the maintenance of good order and discipline. The record is devoid of any evidence whatsoever of prejudice to good order and discipline; in fact, every witness whose testimony touched on the issue stated they never saw anything distracting, agitating, or controversial on or near [Sterling]’s desk. And [Sterling]’s supervisor merely testified she ‘did not like [the Bible quotations’] tone….’ Law and logic dictate that such an arbitrary and capricious purpose for overly restrictive orders falls far short of the mark.”

“Congress and the courts have made it clear that religious freedom is truly our first freedom; it must not be watered down and should be burdened only in the most extreme circumstances,” said Chaplain (Col.) Ron Crews (retired), executive director of Chaplain Alliance for Religious Liberty. “This is just as true in the military. Though it is a unique institution with a mission that must be accomplished, service members cannot be forced to check their faith when they put on the uniform. Their religious freedom is more precious than ever before and must be strongly defended. Those who are willing to give all deserve nothing less.”

By Waylon Bailey One of the most exciting stories in the life of Jesus occurred in his home town of Capernaum. As Jesus taught in what may have been the house of Simon Peter, four men carried their paralytic friend to the rooftop, tore the roof away, and lowered their friend right in front of Jesus. You … END_OF_DOCUMENT_TOKEN_TO_BE_REPLACED