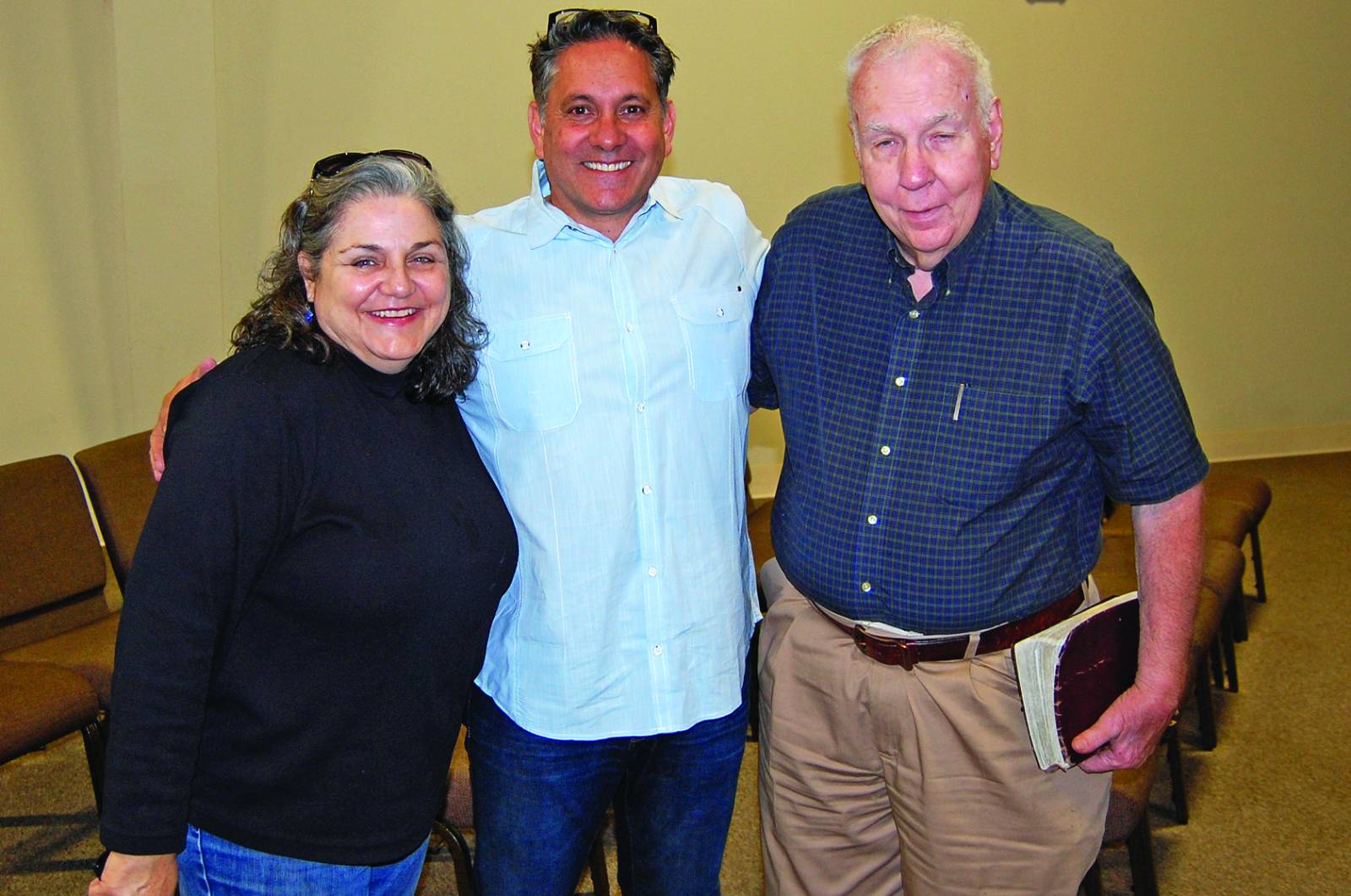 ADDIS – When Elizabeth Hill was asked why she and her husband George were baptized at The Church at Addis by Pastor Thomas Shepard, her face broke into big smile.

“God brought us here,” Elizabeth Hill, 53, said, following the Feb. 21 service. “This is like a First Century church.” 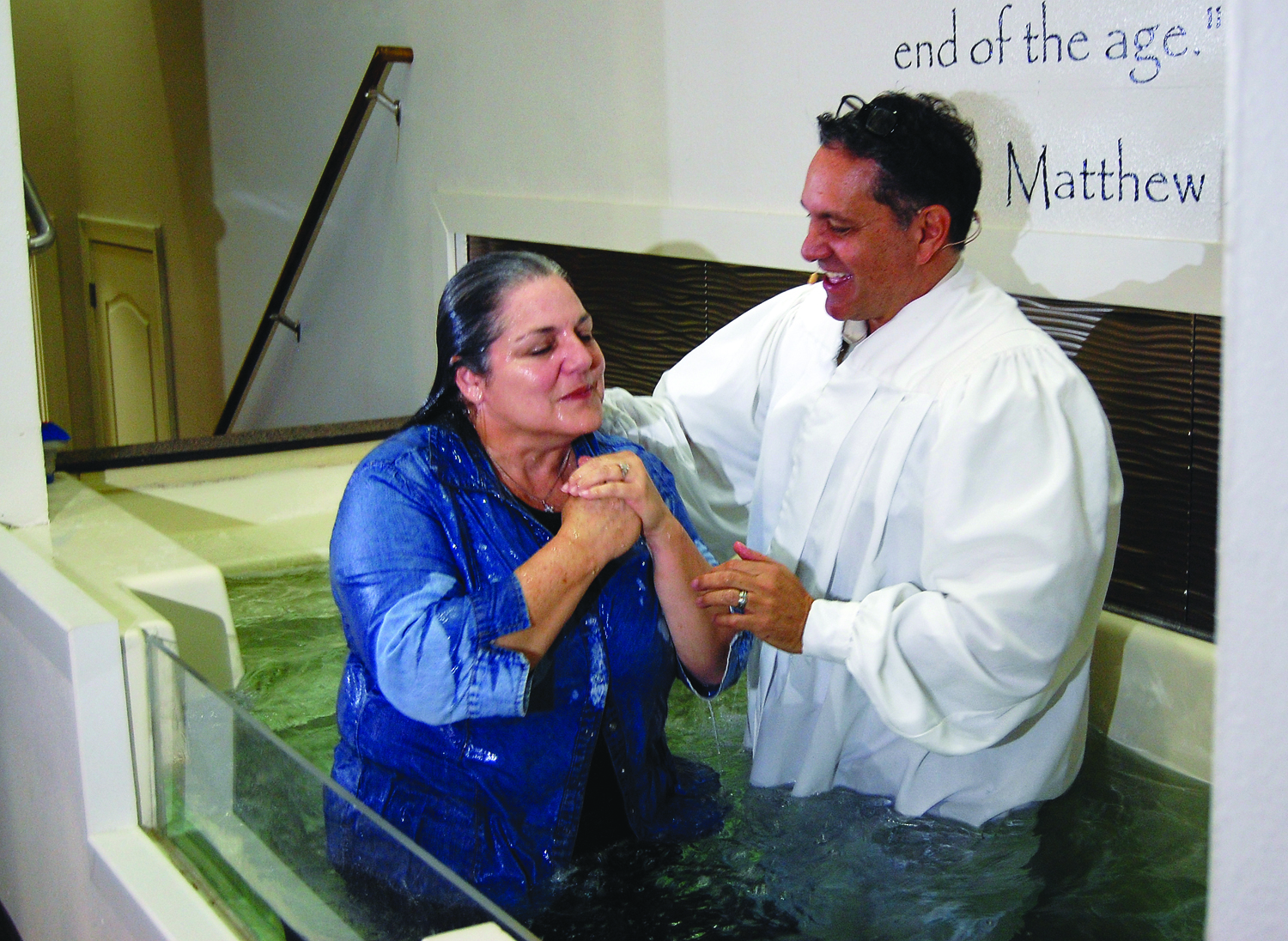 Elizabeth Hill rises up from baptism by Rev. Tom Shepard at the Church of Addis on Feb. 21. photo by mark h hunter

Her husband of 16 years, George Hill, 79, a lifelong Presbyterian and a well-known, retired businessman, agreed. He opened his worn Bible to Acts  2:47, and read aloud, “And the Lord added to their number daily those who were being saved.’ Well, that’s what’s going on right here. If not daily at least weekly.”

Hill pointed to the front of the sanctuary where Shepard and several members were visiting with a young married couple who’d come forward to join and a young woman seeking baptism.

“This is a dynamic church and I want to be a part of it,” Hill said.

Shepard said they’ve baptized around 300 people, mostly adult Catholics, and he baptizes someone nearly every Sunday.

“We have a massive amount of adult Catholics baptized,” Shepard said. “We‘re saturated with Catholics in this area.”

“I was raised a Catholic so coming from that background I’m able to convey the message in a way that they are able to come to the understanding that Jesus Christ is not necessarily the Lord of their life,” Shepard said. “They know a lot about Jesus Christ but actually submitting to that truth and saying ‘I’m going to make him the Lord of my life and to follow through with baptism’ – a lot of people come to this place and say, ‘I need to nail that down.’” 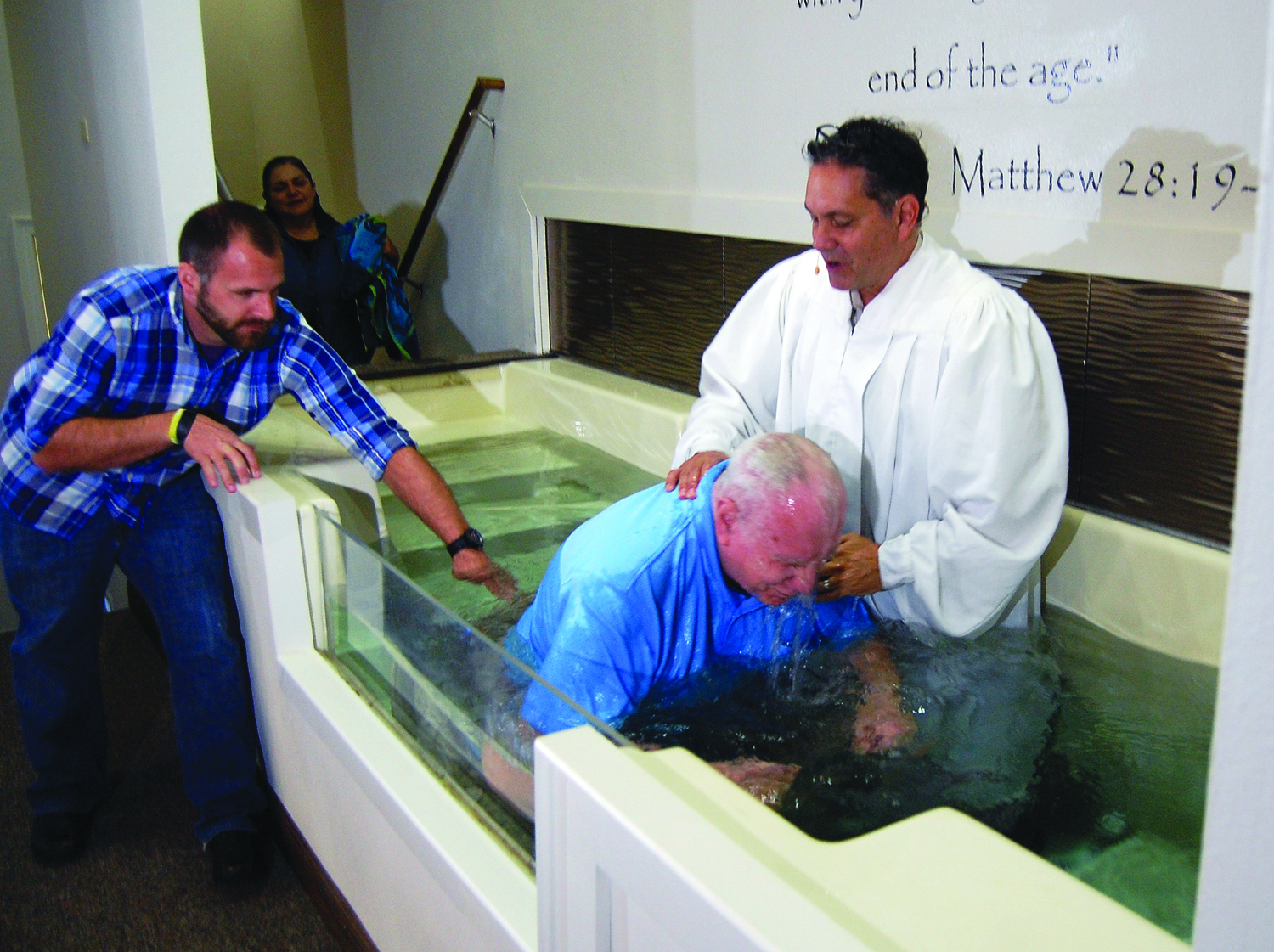 “We don’t baptize a lot of children because we want them to understand completely their decision to follow Christ,” Shepard.

Just before Shepard baptized the Hills, he told them and the congregation, “There is a time in our life when we have to draw a line in the sand and answer Jesus’ question, ‘Are you going to follow me or are you going to follow the world?’ The Hills are both longtime Christians but they want to publicly express their faith as a believer in Christ.”

George Hill, after the service, told how he was sprinkled as an infant.

“But I  really became a Christian about 40 years ago, when I surrendered to him,” Hill said. “I’m being baptized now because the sprinkling system of baptism isn’t in the Bible and the immersion system is what they did in the Bible so I’m re-doing it the right way.

“I kept thinking about how the Spirit descended like a dove on Jesus and was hoping the same thing would happen to me,” he said with a grin. “I was very glad to get it done.”

Shepard took over what was then First Baptist of Addis in 2010, after the  congregation had dwindled to an elderly handful meeting in a small, 1957 brick sanctuary located on 3.5 acres alongside of La. 1. He applied what he called First Century discipleship with 21st Century social media and community outreaches and soon they were holding two services.

The Louisiana Baptist Convention loaned them a circus tent where they met for about a year. In 2012 they built a 10,000 square foot steel building. One Sunday service of about 300 soon turned into two services and now they are seeking to purchase an adjoining forested lot to increase their parking.

“Tom has been doing a great work,” Middleton said. “His focal point is discipleship and he is using social media effectively. Old school evangelism, sharing the gospel, discipleship, but using current social media technologies to be more effective in connecting with people.”

Middleton compared Shepard’s multiple outreaches to fishing at night with a trotline.

“They have a lot of hooks in the water,” Middleton said. “The more hooks you have in the water the greater the chances you catch fish. They are working for as many opportunities to engage the culture as possible.”

By Lane Corley Olive trees produce one of the most desired and sought after fruits around the world. The trees can live for thousands of years. The olive and the olive tree is spoke of in the Bible on numerous occasions. Including a few references to family life, like in Psalms 128:3 – “Your children will be … END_OF_DOCUMENT_TOKEN_TO_BE_REPLACED