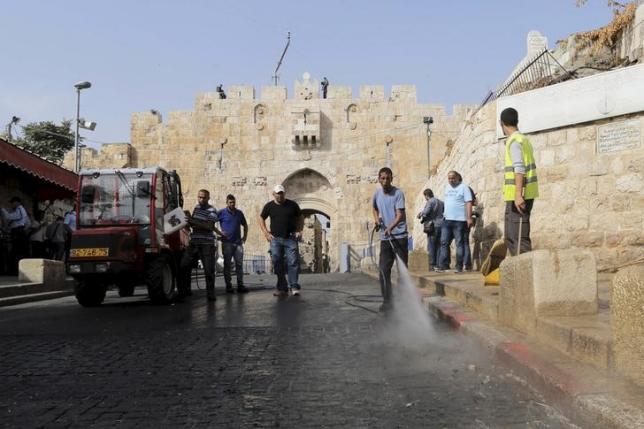 A worker cleans the ground at the scene at the Lions gate of Jerusalem's Old City October 12, 2015. REUTERS/Ammar Awad

JERUSALEM (Christian Examiner) – Rumors of a third intifada, or Palestinian uprising, are growing amid a rash of stabbing attacks by Palestinians that have occurred, centering on Jerusalem, throughout October.

On Monday, a 13-year-old Jewish boy riding his bike in his neighborhood was stabbed multiple times by 13-year-old and a 17-year-old Palestinians, the Jerusalem Post reports. The younger Palestinian teen was subdued by a car driven by a passerby, while the older, who also stabbed a nearby 24-year-old Jewish man, was killed by police.

“Police continue to step up security and will continue to prevent or neutralize terrorists who carry out attacks,” said Jerusalem police spokesman Micky Rosenfeld, who has tweeted updates about the incidents.

Some violence is directed against police. On Monday, an attacker who allegedly pulled a knife on an officer near Lion’s Gate in Jerusalem was shot and killed.

By Stewart Holloway PINEVILLE, La. (LBM) - For over two months now, my oldest son, my mom, and I have spent most Friday mornings at my mom’s clearing overgrown brush. What was planted as a fruit orchard in an open pasture almost thirty years ago has grown into a wilderness of every kind of vine and tree … END_OF_DOCUMENT_TOKEN_TO_BE_REPLACED