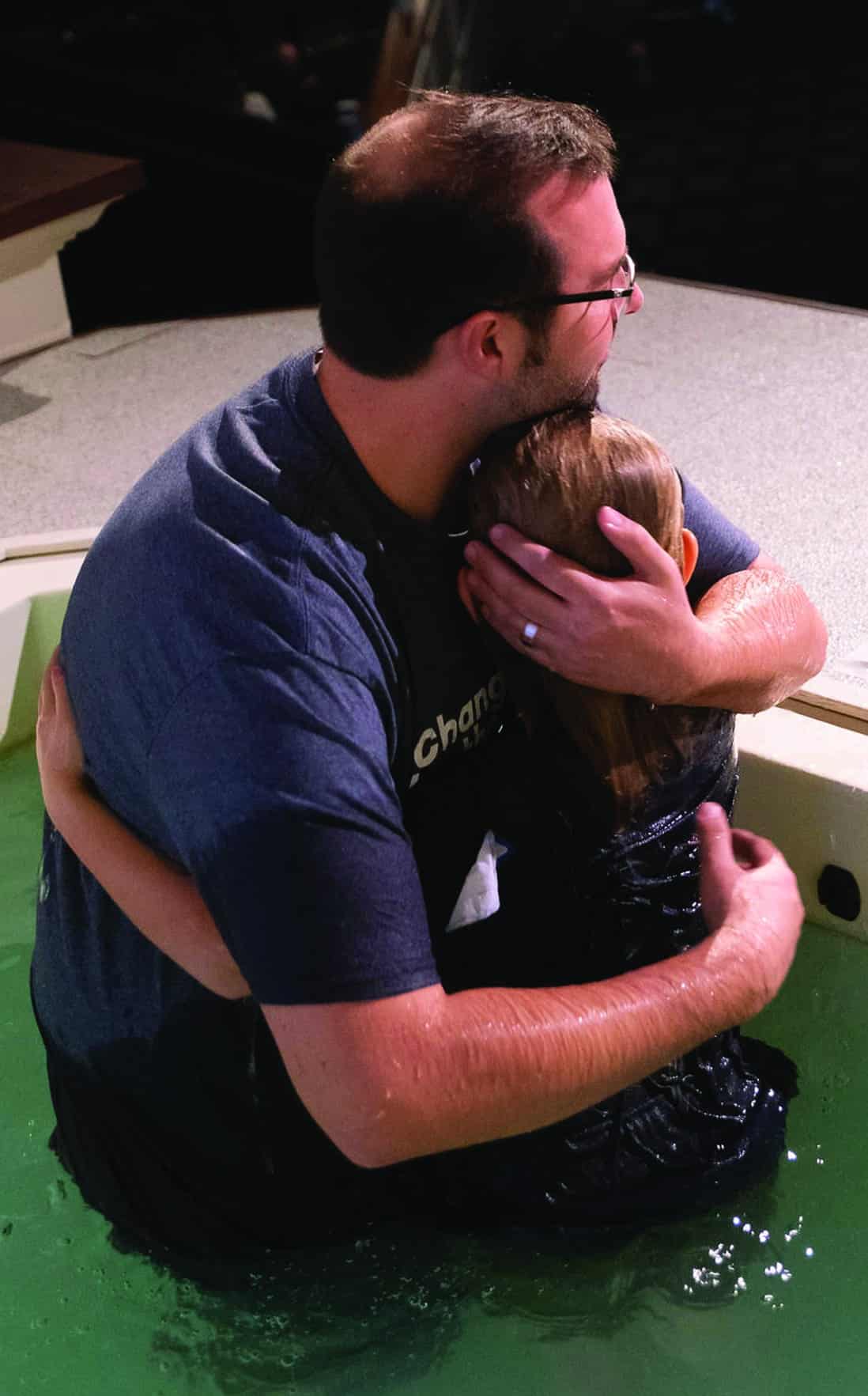 Dustin Lee and his daughter Micah embrace after her baptism Feb. 14 at First Baptist Church in West Monroe. Micah and three other children were baptized during “Wear Red Sunday” when youngsters wore red shirts to proclaim their love for Jesus. Submitted photo

WEST MONROE, La. (LBM) – Feb. 14 was more than a holiday for Dustin Lee and his six-year-old daughter, Micah, and greater than the small expressions of love exchanged through cards and small gifts among their family.
Instead, it was a day that marked the love of the Father for His child.

A month after confessing her sins and asking Christ into her life, the youngster proclaimed that commitment publicly as her father baptized her to affirm her adoption as a child of God.

“Micah had questions for a while and on the first Sunday night in January she told my wife, Alisha, and me she was ready,” Lee, minister to children at First West, told the Baptist Message, “Right there in our home, we got the privilege of sitting with her as she said she was a sinner and asked God in her heart. As dads our highest calling and privilege is to pray for our children and walk alongside them in their faith journey. This extends to the time from before they accept him to when they grow more to become a disciple of Him.”

Micah was joined by three other children for baptism during “Wear Red Sunday” at First West. During the service, children wore red shirts to proclaim their love for Jesus.

“I am so thankful for our parents leading well during this season,” Pastor Michael Wood said. “They have been so intentional as the primary disciplers of their children. It has been a great thing to see the fruit of that time as evidenced by many children coming to faith in Christ and following Him in baptism.”

Since March 2020, First West has resorted to creative measures to reach children and in turn has seen 14 of them baptized. Also, an additional 100 volunteers have stepped up to serve in a variety of roles in the children’s ministry, which had seen a 30 percent increase in attendance on Sundays right before COVID-19 restrictions were implemented.

Overall, since March, the church that averages more than 2,500 for Sunday morning worship has seen 42 baptized and many more are planning to be baptized, Lee said.

Throughout the pandemic, Life Group leaders have continued to contact members and guests through phone calls, text messages and delivery of meals, balloons and care packages. The church also has hosted events such as a drive-in movie night at its West Monroe and Fairbanks campuses; a park outreach that included a ventriloquist and catered Chick-fil-A meals; and, delivery of Easter eggs to nearly 500 homes.

Lee said none of that would be possible without a dedicated army of volunteers and church staff.

“People are very appreciative of all we have done,” he said. “Now that people are home more than ever, a simple act of kindness goes a long way. As we have gone through COVID-19 we have faced something we haven’t dealt with before. It’s hard and at times scary, but our trust is in the Lord, and we know that God has called us to be creative and pursue Him with our whole hearts.”

But even more, Lee is thankful for the way the entire congregation has embraced reaching their neighbors, including the next generation.

“It’s incredible to see how the Lord is working,” Lee said. “It’s not just one person and is definitely not just me. It takes a God movement and takes the whole church praying.”

Garrah Leshe, whose daughter, Viv, was baptized Jan. 10, said she is grateful for how the church has strengthened the faith of her family. Viv turned to Christ Nov. 16 and was excited to publicly declare her faith in Christ during a day which featured activities based off the movie “Frozen.”

Even though the heater was not functioning inside the baptistery, Viv was adamant on participating.

“Though the waters were freezing, nothing could erase the smile on her face or mine that morning,” she said. “I could not have been more proud or more thankful to know that we will all be together in Heaven one day. I am so thankful for all of the Godly influences on her life from our family, friends and church leaders. I cannot wait to see all of the amazing things God has in store for her.”

By Don F. Mabry ALEXANDRIA, La. (LBM)-- The number of churches in our country constantly is changing and it is very difficult to acquire information from the various denominations, but estimates indicate that there are 330,000 Christian churches and congregations in the United States today. But the question … END_OF_DOCUMENT_TOKEN_TO_BE_REPLACED