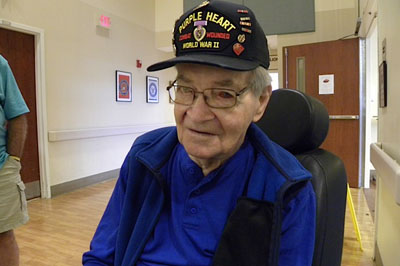 Jimmy Connelly, after returning from World War II, became a leading churchman in St. George, S.C. He died March 26 at the Veterans’ Victory House in nearby Walterboro. Photo by J. Gerald Harris

GEORGE, S.C. (BP) — An estimated 3.6 million Americans fought in the Pacific Theatre in World War II, overcoming brutal encounters on island after island against Japanese soldiers burrowed into the hillsides.

The late Jimmy Connelly was one of those Americans.

The Navy made Connelly chief of a troop-landing Higgins Craft during the massive amphibious assaults at the outset of the Allies’ first major Pacific offensive against the Japanese — Guadalcanal in the Solomon Islands.

Each craft could ferry up to 36 Marines, and when they stormed the beaches, Connelly operated a 7.62mm belt-fed machine gun to provide cover. On his 10th trip to transport troops into the Solomon Islands battle zone, he also was carrying several hundred five-gallon cans of gasoline. When a mortar round struck their craft, shrapnel pierced his neck and arm, and his pants were set afire, propelling him into the ocean.

When he returned home from the war, Connelly never mentioned the injuries. Too many men like him — 18 to 21-year-olds uprooted from their families and hometowns — lost their lives and limbs that day. His suffering, by comparison, had been minor.

Seventy-two years later, Connelly could still recite the names of his crew members killed that day in the Solomon Islands. Not until his mid-80s did he even speak of the war — or that the Navy awarded him a Purple Heart.

Child of the Depression

Connelly was born in 1922 into a family who scrapped their way through the Great Depression on a small farm in Branchville, S.C. He carried fresh milk on the school bus, and when it stopped at a railroad track, he would jump off and make deliveries to the stores before walking about a mile to school. With the money he made, Connelly was able to buy his clothes.

After high school, Connelly attended the University of South Carolina in Columbia but was unable to find a job there to support himself. So he returned to the family farm and eventually secured a job at the Charleston Naval Shipyard as an apprentice building and repairing ships. He became a ship fitter, someone who measured and designed repairs — which led to his Navy enlistment.

When he returned home from the war, Connelly caught the eye of Frances George, who lived about 10 miles away. He began frequenting their family’s restaurant where she worked in January 1946.

“He was very quiet, not boisterous,” Frances said. “Some of the soldiers were so flirty, but my husband wasn’t like that.”

Jimmy and Frances were married on July 2, 1946, when she was barely 18. This summer would have marked their 70th anniversary. Their only child, Jimmy Connelly Jr., was born in 1947.

Connelly returned to the Charleston Ship Yard after the war where he worked as a supervisor in design and planning until he retired. 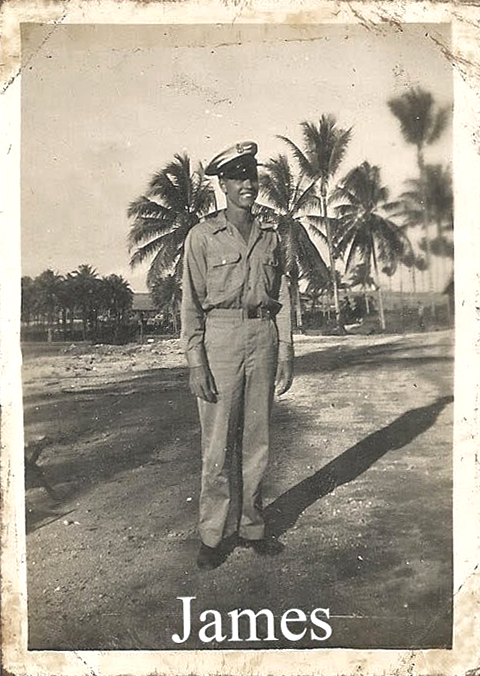 The late Jimmy Connelly, shown here in uniform during World War II’s battles in the Pacific, received a Purple Heart for injuries when his Navy troop transport was hit by enemy fire — an honor he never told anyone about until some 10 years ago.
Submitted photo

Because Connelly never talked about the war, Frances never understood how much of the war he brought home. Neither of them had knowledge of post-traumatic stress disorder (PTSD).

“At night, he would have terrible nightmares three to four nights per week,” Frances said. “It would scare me to death. He didn’t know what it was, and neither did I.”

Connelly had recounted in a 2015 interview with the Georgia Christian Index, “The most vivid recollection of the war for me was seeing those young soldiers being riddled with bullets and shrapnel when they landed on the beaches. I could see them losing their limbs and dying in the sand, and I can still hear them crying out for their mommas, but their mommas were not there.”

The horror of war “still lives with me today,” Connelly told The Index. “I saw large numbers of our best young men die … to ultimately preserve our own freedom.”

He also remembered the killing of enemy soldiers. From his vantage point on the Higgins Craft, he could see Marines use flamethrowers to flush the Japanese from their entrenchments. “It was horrible, but I could smell the stench of burning flesh from my vantage point hundreds of yards away,” he said.

Not until about 10 years ago did Frances know that Jimmy had a Purple Heart. That was also about the time she learned the extent of his shrapnel wounds when he started bleeding while shaving as shards surfaced on his skin.

When he had a stroke, doctors ordered a routine MRI. The powerful magnets in the MRI pulled one of the shrapnel pieces close to his jugular vein and nearly severed it.

Jimmy and Frances were members of Memorial Baptist Church in St. George, S.C. Besides his gentle spirit, friends and family remember how much he loved his church as they mourned his passing this year on March 26 at age 93. He was one of nearly 500 elderly World War II veterans estimated to die each day.

“At the funeral, I got pretty emotional,” said Clay Shook, Memorial’s pastor. “He was a dear friend of mine. As a pastor, I need men like him in my life. He cared about his church, me and my family.”

Shook spent time with Connelly in his role as a deacon and trustee as well as the church’s jack-of-all-trades fix-it man. Connelly earned a reputation around town for shopping to get the best price on church repairs.

“Jimmy loved his church,” Shook said. “He was an exceptional churchman and deacon,” a man who uniquely made “a huge difference.”

He had come to know Christ as a young lad and was baptized at Mt. Tabor Baptist Church near Reevesville. “But I have been baptized three times — once as a child, again in the Potomac River before going to the Pacific. I just wanted to make sure I had properly obeyed the Lord,” he told The Index. “I was also baptized in the Jordan River when I took a trip to Israel.”

Connelly’s example affected Shook’s only son, Andy, who served in the Marines from 2008-2014. After boot camp, Andy came to church in his dress blues to salute Connelly on the church steps. At the graveside, Andy placed his Afghanistan combat-action ribbon on Connelly’s casket.

In World War II’s battles for freedom, Connelly had told The Index, “I considered it worth my life.”

Yet, “The proudest moment of his life,” his wife Frances said, “was when they elected him deacon emeritus.”

By Joe McKeever “‘…your ways are not my ways,’ saith the Lord.”  (Isaiah 55:8) Keep an eye on how the Lord works in your life. You might learn something useful for the next time He wants to use you. This little couplet seems to sum up 90 percent of what Scripture and life teach us concerning the operation … END_OF_DOCUMENT_TOKEN_TO_BE_REPLACED