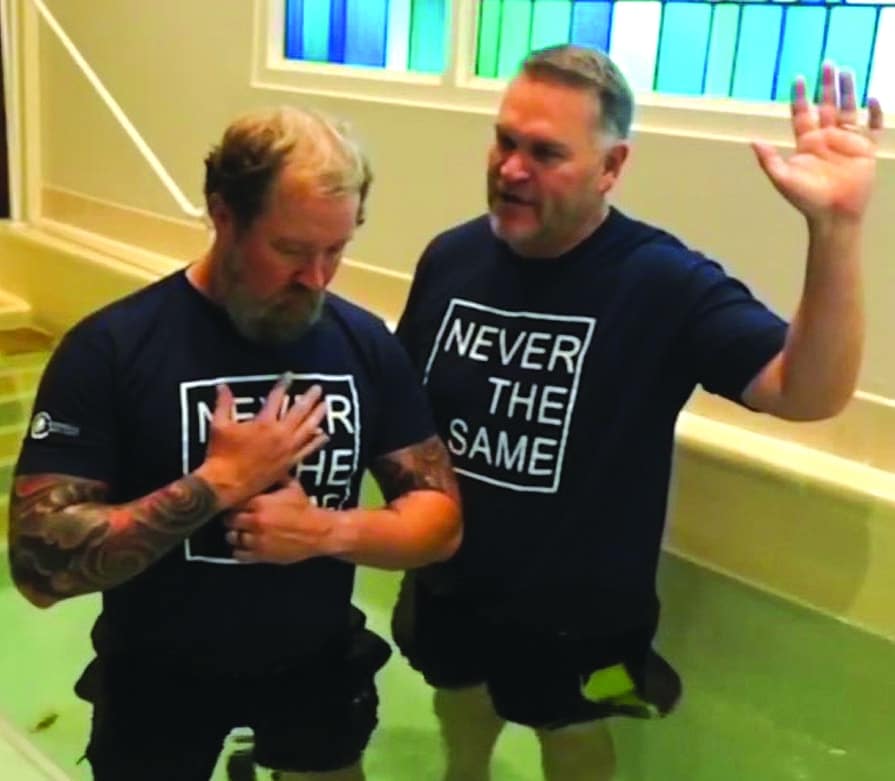 BENTON, La. (LBM) – When Pastor John Fream made a 2020 dare to members of the Cypress Baptist Church in Benton in January, urging them to embrace the “Who’s Your One” evangelistic challenge to share the Gospel with someone close to them, little did he know that two months later a pandemic would test the church’s commitment to the task.

But instead of backing down, members embraced the circumstances as an open door to present the Gospel to their neighbors, he said.

In the ensuing months, the congregation shared the Good News that can sustain during the uncertainty of a COVID-19 health emergency; and, by the end of November, 238 new converts had been baptized, up from 214 baptisms in 2019.

“Our folks have been intentional to reach people and offer the hope in Christ,” Fream said. “We’ve been very aggressive about challenging them to do it. People need hope and we want to give them the Hope.”

Even when the church was unable to meet, baptisms continued.

Fream said during a six-week period, when the congregation was unable to meet in their facilities because of COVID-19 attendance restrictions, 20 people were baptized in pre-recorded videos that were broadcast during the livestream of services on Facebook Live, YouTube and the church website.

Fream said attendance has now reached 1,500, compared to the 2,000 who came in early March. Like previous years, members have continued with their evangelistic zeal that has not waned.

“It starts with my staff and their commitment to reaching the world with the Gospel,” Fream said.

“We’ve been hit with hurricanes, hailstorms and a pandemic, but our folks have committed to — no matter what — taking the Gospel out into the world,” he continued. “The pandemic has been scary and tough, but at the end of the day we have challenged them to walk by faith and not by fear. Our folks have still not gotten over their desire to see others saved. They still applaud and cheer every time we baptize somebody. We constantly remind them this was a soul that was dead and is now alive. For me it’s a reminder that the Gospel works. We just have to share it.”

First Baptist Church, Covington, is another congregation that has reported success from a “Who’s Your One” emphasis, with 112 new believers baptized in 2020.

Pastor Waylon Bailey said a great spiritual harvest was anticipated when the church, which averages 2,300 for Sunday morning worship, launched the campaign in January. When COVID-19 infections soared, Bailey said he told members to trust in the Father and move forward in sharing the Gospel.

“I asked them to seriously consider such matters as God’s response to this kind of time, asking God to use it in very specific ways in people’s lives and desiring to be intentional to talk about the ultimate hope we have in Christ,” Bailey said. “I think all of that has come together for good. Obviously, it feels like we were harmed by the pandemic; but, maybe “Who’s Your One” was such an emphasis that what Satan meant for evil, God used for good.”

Four months after statewide COVID-19 restrictions were put in place, the church held its annual Vacation Bible School. Only one-third of the typical 1,000 person attendance level was reached, but 51 children made decisions to follow Christ and followed through with baptism.

“The great thing from this was when we followed up with two of the children, their families ended up accepting Christ and were baptized,” Bailey said. “That has been really encouraging and exciting to see.”

Additionally, several new converts accepted Christ as a result of a virtual discovery class for new members and prospects. After different sessions of online classes were held in April, May and June, his staff followed up with participants and were privileged to lead some of them to a relationship with Christ, he said.

“What we have seen take place keeps us going,” Bailey said. “We know that God is working; and, if God is at work, who are we not to be at work? It’s encouraged all our pastors to move forward, not to be weary, and keep doing those things God wants us to do. He’s ready to go before us in the work that need to be done.”

More than 50 came to the altar over the course of multi-day revival services at Coteau Baptist Church in October. On Nov. 29, eight of those followed up with baptisms, with an additional two awaiting baptism. Since January, the congregation, which averaged 65 worshipers on Sunday mornings prior to the pandemic, has witnessed 12 baptisms.

Pastor Wayne Hunt said even COVID-19 could not stop a mighty move of the Holy Spirit during the revival.
Importantly, Hunt has connected mature believers with new believers to help then grow deeper in their spiritual walk with the Lord. He said discipleship has helped the church to surpass its pre-COVID-19 average worship attendance, reaching more than 80 recently.

Hunt said his members have modeled that hope can be found in Christ amid so much uncertainty.

“On Wednesdays, I discuss how you practice what you are learning,” Hunt said. “Biblical knowledge without practical application doesn’t mean anything. I believe if you don’t teach people how to live out, how to practice it, you don’t do any good.”

Hunt said despite challenges presented by COVID-19, the church has maintained a desire to reach its community.
When Gov. Edwards’s COVID-19 public gathering restrictions were implemented March 22, Hunt moved to exclusively Facebook Live services, with 265-600 logging in to watch the services.

The men and women held separate conferences at Tall Timbers Baptist Conference Center in Woodworth and as many as 25 children and 45 adults have attended Wednesday night activities, including several who do not attend the church on a regular basis.

Looking toward the future, Hunt believes members are positioned for continued spiritual growth as they further reach the community with the hope of the Gospel.

By Joe McKeever “‘…your ways are not my ways,’ saith the Lord.”  (Isaiah 55:8) Keep an eye on how the Lord works in your life. You might learn something useful for the next time He wants to use you. This little couplet seems to sum up 90 percent of what Scripture and life teach us concerning the operation … END_OF_DOCUMENT_TOKEN_TO_BE_REPLACED