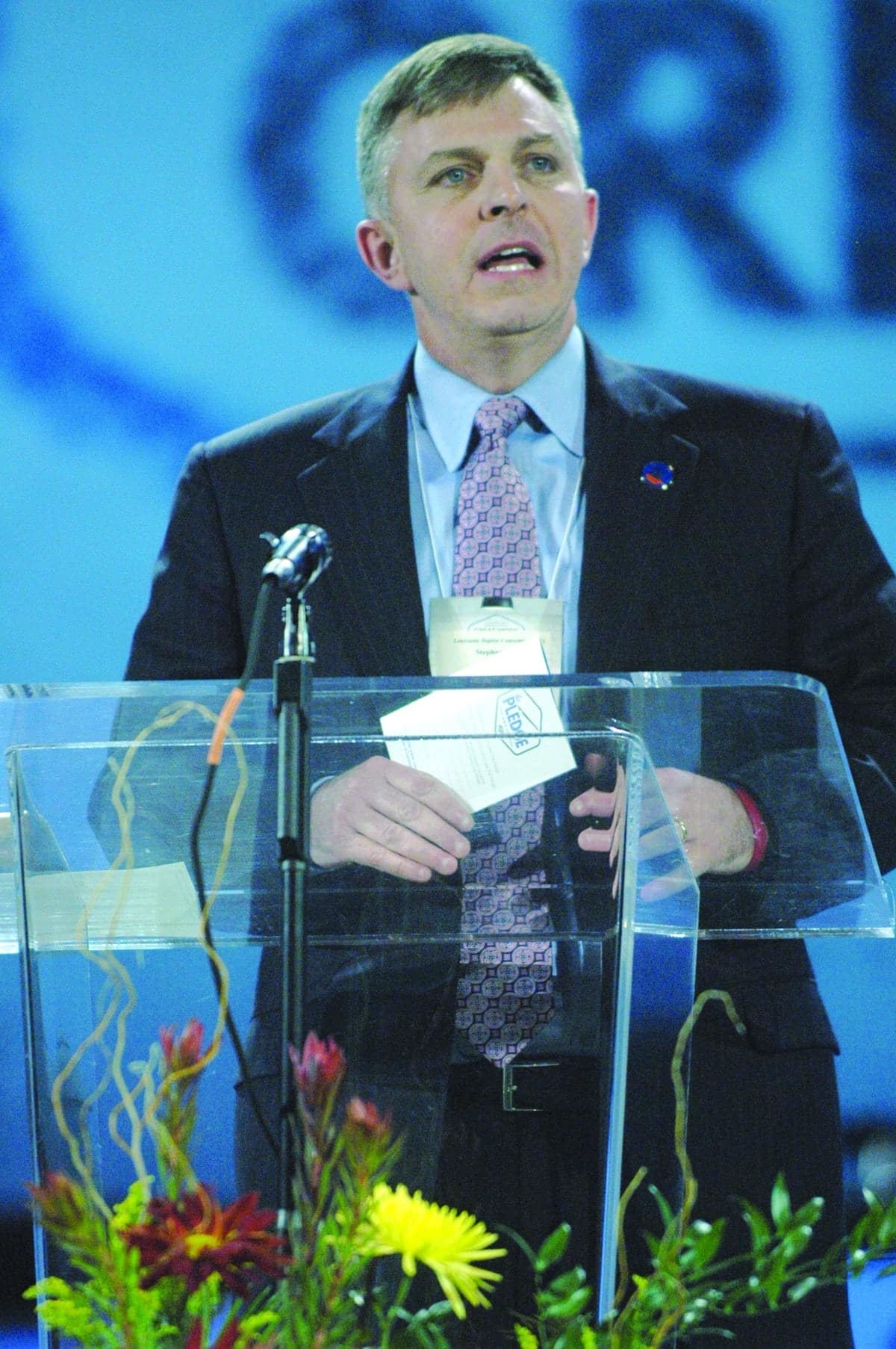 Louisiana Baptist Executive Director Steve Horn, when he served as president of the Louisiana Baptist Convention, asked messengers at the 2015 Annual Meeting to commit to the Pledge, a pastor-driven initiative designed to increase Cooperative Program giving. File photo

ALEXANDRIA, La. (LBM) – Louisiana Baptists are in the final year of implementing the President’s 2020 Commission Report, an initiative undertaken during the leadership of Waylon Bailey, pastor of the First Baptist Church in Covington, and the LBC president in 2012-2013.

This article is the 10th in a series published by the Baptist Message to report what successes have been achieved toward the ambitious goals of the statewide initiative, as well as to note what objectives remain to be done.

Increase financial support through the Cooperative Program and the special mission offerings.

Several attempts have been made to increase Cooperative Program support over the seven-year span of the 2020 initiative. While those efforts generated some interest, they have not been enough to reverse the downward trend in CP giving, Louisiana Baptist leaders said.

The Pledge was one of the first official efforts to generate increased CP participation.

Launched in 2015, The Pledge was a pastor-driven initiative designed to highlight the effectiveness of cooperative missions and ministries. Steve Horn, then pastor of First Baptist Church, Lafayette, and president of the Louisiana Baptist Convention, led the first phase of this effort followed by Gevan Spinney, his successor and pastor of First Baptist Church, Haughton, who spearheaded the second phase.

Additional efforts included use of print, video, web and social media to inform churches of how their participation in CP is empowering missions and ministries in Louisiana and beyond. Special offerings such as the Georgia Barnette Offering have seen an occasional spike due to a large gift.

Horn, now the executive director for Louisiana Baptists, publically stated his commitment to CP when he assumed his new role in May 2019.

“I will be a champion of the Cooperative Program,” he said. “A former church member of mine regularly asked the question ‘is this the best we can do’ relating to our CP giving. This is the question we must ask at every level of Louisiana Baptist life.”

By Steve Horn ALEXANDRIA, La. (LBC) - This year has brought about more challenges and cancellations than any of us care to recount. For those meetings and events that were scheduled, more times than not, they happened virtually rather than in person. This has been true for us as Louisiana … END_OF_DOCUMENT_TOKEN_TO_BE_REPLACED