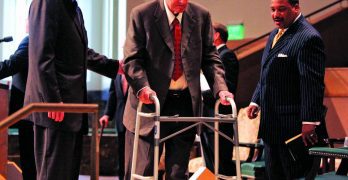 By Staff, Baptist Message News that Billy Graham died during the early morning hours of Feb. 21 prompted reaction from those who admired the famous evangelist, including those in Louisiana Baptist circles. Fred Luter, pastor of Franklin Avenue Baptist Church, New Orleans, said a highlight of his time as president of the Southern Baptist Convention was a 2012 visit to the home of Graham. “I felt like I was in the presence of Moses on Mt. Sinai,” Luter told the Baptist Message. “For a kid from the Lower Ninth Ward in New Orleans to be in the home of the greatest evangelist that ever lived was an unforgettable moment I will cherish for the rest of my life.” Six years earlier, Graham came to New Orleans to lift the spirits of Luter, area pastors and the residents of the area who had lost so much in Hurricane Katrina, which made landfall in August 2005. During his message, Graham told the overflow crowd of 17,800 people at Celebration of Hope in the New Orleans Arena in late February 2016 that it was one of the last evangelistic sermons he would preach and that he was looking “forward to a big reunion one day in heaven” with his long-time crusade colleagues George Beverly Shea and Cliff Barrows.” The … END_OF_DOCUMENT_TOKEN_TO_BE_REPLACED 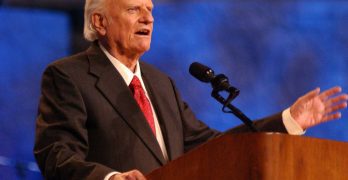 By Billy Graham Evangelistic Association CHARLOTTE, N.C. - Evangelist Billy Graham died today at 7:46 a.m. at his home in Montreat. He was 99. Throughout his life, Billy Graham preached the gospel of Jesus Christ to some 215 million people who attended one of his more than 400 Crusades, simulcasts and evangelistic rallies in more than 185 countries and territories. He reached millions more through TV, video, film, the internet and 34 books. Born Nov. 7, 1918, four days before the armistice ended World War I, William Franklin “Billy” Graham Jr. grew up during the Depression and developed a work ethic that would carry him through decades of ministry on six continents. “I have one message: that Jesus Christ came, he died on a cross, he rose again, and he asked us to repent of our sins and receive him by faith as Lord and Savior, and if we do, we have forgiveness of all of our sins,” said Graham at his final Crusade in June 2005 at Flushing Meadows Corona Park in New York. While Graham’s primary focus was to take this message to the world, he also provided spiritual counsel to presidents, championed desegregation, and was a voice of hope and guidance in times of trial. In 2001, he comforted his country and the world … END_OF_DOCUMENT_TOKEN_TO_BE_REPLACED 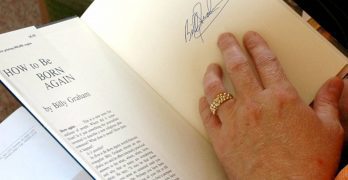 By Message Staff NEW ORLEANS – Of the books New Orleans Baptist Theological Seminary professor of evangelism Preston Nix owns, his copy of Billy Graham’s “How to be Born Again,” autographed by the late evangelist, stands out as a favorite. Though he doesn’t look at the book often, Nix plans on pulling out the copy soon to reflect on the gift sent to him by the famed evangelist. When Hurricane Katrina made landfall in August 2005, a library of books collected during his 30-year career as a pastor was destroyed. Nix’s sister knew how much he admired Graham and wrote the Billy Graham Evangelistic Association to request an autographed book be mailed to her brother. By September, Nix was surprised not only with the autographed copy of the book but also a box of books from Graham’s personal library. “The very fact they would take the time to do it in the midst of all that was happening to me was really comforting,” Nix told the Baptist Message. “It was such a special honor to receive that from the world’s greatest evangelist. The fact he would take the time to do that and go beyond to send me books from his library speaks volumes about who he was. My heart is saddened for us but grateful for him, that he’s in glory … END_OF_DOCUMENT_TOKEN_TO_BE_REPLACED 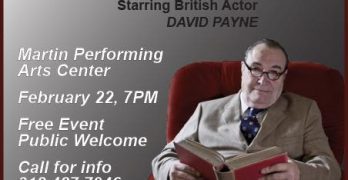 By Norm Miller, LC News PINEVILLE - The atheist-turned-Christian, Clive Staples (CS) Lewis (1898–1963), is regarded by evangelicals as one of the intellectual giants of the twentieth century, and arguably one of the most influential writers of his day. His 30-plus books continue to attract thousands of new readers every year. Many consider his magnum opus to be “Mere Christianity." “The Chronicles of Narnia” have sold more than 100 million copies and been transformed into three major motion pictures. Louisiana College will feature CS Lewis personified by British actor David Payne, who has portrayed Lewis in the play, Shadowlands. Payne is touring the US and will present “An Evening with CS Lewis” at LC’s Martin Performing Arts Center, February 22 at 7 p.m. Thousands have attended his 500-plus performances, which have won Payne numerous accolades. “Of the many conferences and events we have brought to CenLa in the last few years, this portends to be one of the most significant,” said LC President Rick Brewer. Brewer established the CS Lewis Honors Scholars program at LC because “Lewis was such an advocate for clear-thinking and writing about Christianity and living to emulate its figurehead Jesus … END_OF_DOCUMENT_TOKEN_TO_BE_REPLACED

By Will Hall, Baptist Message executive editor ALEXANDRIA, La. (LBM) – It’s a presidential election year, Louisiana has suffered another devastating natural disaster, and as Yogi Berra has said, “It's déjà vu all over again." In 2016, presidential candidate Donald Trump came to Louisiana just days after the … END_OF_DOCUMENT_TOKEN_TO_BE_REPLACED

By Will Hall, Baptist Message executive editor ALEXANDRIA, La. (LBM) – It’s a presidential election year, Louisiana has suffered another devastating natural disaster, and as Yogi Berra has said, “It's déjà vu all over again." In 2016, presidential candidate Donald Trump came to Louisiana just days after the … END_OF_DOCUMENT_TOKEN_TO_BE_REPLACED