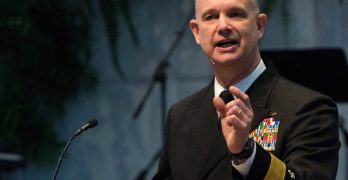 By Marilyn Stewart, NOBTS Communications NEW ORLEANS -- Rear Admiral Endel Lee, a Navy Reserve chaplain officer and North American Mission Board church planting catalyst in military communities, challenged a chapel audience at New Orleans Baptist Theological Seminary to "Do your part" for the Kingdom. The Feb. 8 service included the commissioning of a new Navy chaplain. NOBTS President Chuck Kelley encouraged the audience in opening remarks to consider the varied service opportunities available to chaplains. "It is a special day on our campus because we are focusing our attention on a very particular calling in ministry, one which does not get much attention -- that is, the chaplain," Kelley said. "They make a great impact." Kelley noted chaplains serve in settings ranging from "military to hospital to industry." More than in some fields of ministry, Kelley added, chaplains are "expected" to lead out in spiritual conversations. "They expect a chaplain to be a representative of faith," Kelley said. "This is a high calling indeed." Lee's 35-year military career includes more than 10 years in the Marines and 22 years as a Navy Reserve chaplain, encompassing deployments overseas and mobilizations to New York City … END_OF_DOCUMENT_TOKEN_TO_BE_REPLACED 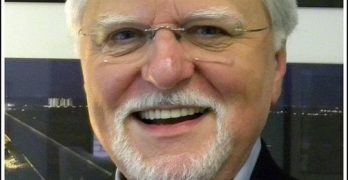 By Joe McKeever I was in a congregation of ministers in Birmingham once in the early 70s when Billy Graham entered. A shock wave moved across the auditorium. It was amazing, and I had no explanation for it. He was God’s man. No question about it. During the last years of the 1980s, I pastored Charlotte’s First Baptist Church and visited with Billy and Ruth Graham on several occasions. His sister Catherine was in my church, along with her family. Mostly, we shared a hospital waiting room while their friend and my congregant Grady Wilson was in surgery. Once I handed them a notepad and asked them to write their favorite scripture verse and sign it. That this was a presumptuous thing to do never entered my mind. Billy jotted down “Psalm 16:11” and signed that familiar name. I said, “I’m glad you wrote that because I’ve quoted that verse for years as Billy Graham’s favorite.” Ruth Bell Graham laughed and said, “My favorite keeps changing!” As I recall, she wrote Proverbs 3:8-13 and signed it. My secretary had those two notes framed and they hung in my office for years, until I donated them to a fundraiser for a New Orleans ministry. In November of 1987, the entire Graham team came to our church for the celebration of … END_OF_DOCUMENT_TOKEN_TO_BE_REPLACED 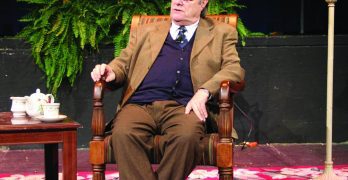 By Victor Villavieja PINEVILLE (LBM) — British actor David Payne’s performance of “An Evening with C.S Lewis” transported a standing-room-only crowd at Louisiana College’s Martin Performing Arts Center back to Lewis’s living room in Oxford, England in 1963. More than 500 people from as far as New Orleans and Benton, including a family of seven from Monroe came to Louisiana College to see the play, as the actor transported the crowd back to Lewis’s living room in Oxford, England. Because LC’s Martin Performing Arts Center was standing-room-only, 75 others assembled in Bolton Chapel to watch the presentation via live feed. From an upholstered armchair, Payne illustrated some of the occurrences that marked the life and work of Clive Staples Lewis. Far from a thorough biography, Payne relies on a relaxed and eloquent monologue to unfold the reasons behind Lewis’s inspiration, his personality, and his faith. He, with his acting, invites every attendant to participate in a fictitious conversation with the deceased storyteller. The British actor appropriates the novelist’s memories, sharing Lewis’ experiences with the public as if they were his. Speaking in the first person, Payne recalls Lewis’s childhood and his … END_OF_DOCUMENT_TOKEN_TO_BE_REPLACED 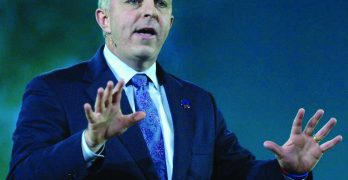 By Steve Horn Feb. 21 we learned of the passing of Billy Graham. He was a great evangelist in the sense of what might be called mass evangelism—preaching to mass crowds. I woke this morning thinking of Perry Sanders, the greatest personal evangelist I have ever known. Sharing the gospel one on one was as natural for him as talking about the weather. Feb. 22 would have been my predecessor Perry Sanders’ 90th birthday. Since this day would have been his birthday, I dug out my notes from the sermon I shared at his funeral. I hope those of you who knew him and those who have never heard his name will be encouraged today about personal soul-winning (as Bro. Perry would have called it). Here is the excerpt from the funeral message. One of Bro. Perry’s life verses has been Romans 1:16. Paul wrote: “For I am not ashamed of the gospel of Christ, for it is the power of God to salvation for everyone who believes, for the Jew first and also for the Greek.” I would dare say that if we gave everyone the opportunity to give one word that describes Bro. Perry, a good number of us would use the word “boldness.” Boldness is described in this life verse by the phrase, “I am not ashamed.” I think even Bro. Perry’s harshest critic … END_OF_DOCUMENT_TOKEN_TO_BE_REPLACED

By Lane Corley MADISONVILLE, La. - In Luke 15, Jesus gives us a glimpse of the Father’s heart for the lost. 1. Those far from God liked Jesus and he liked them (verse 1). Is that true of me? When was the last time someone far from God approached me? Am I available to them? Building relationships with … END_OF_DOCUMENT_TOKEN_TO_BE_REPLACED

By Lane Corley MADISONVILLE, La. - In Luke 15, Jesus gives us a glimpse of the Father’s heart for the lost. 1. Those far from God liked Jesus and he liked them (verse 1). Is that true of me? When was the last time someone far from God approached me? Am I available to them? Building relationships with … END_OF_DOCUMENT_TOKEN_TO_BE_REPLACED