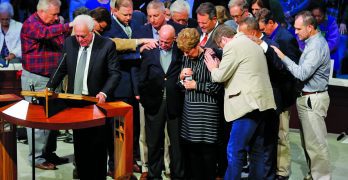 By Brian Blackwell, Message Staff Writer ALEXANDRIA (LBM) - Wayne Jenkins’ call to fulfill the Great Commission has taken him from the bayous of south Louisiana to the streets of Rio de Janeiro, Brazil, during his 27 years as director of evangelism for Louisiana Baptists. Jenkins retired Jan. 31, but his commitment to share the Gospel alongside Louisiana Baptists will continue with annual trips to Brazil. He hopes to continue spending time with his children and grandchildren, but he is determined to assist with the Harvest and other evangelism efforts that equip Louisiana Baptists with the tools needed to share their faith. “I never thought I would work for the Convention,” Jenkins said. “I always had high regards for the men and women who worked for the Convention and would never have felt qualified. When (Louisiana Baptist Convention Executive Director) Mark Short approached me about considering the position of evangelism director, it was the one position I would consider. “Never would I have dreamed I would have been privileged to work here for 27 years and under three executive directors,” he added. “To be able to work with pastors, directors of missions, staff and laymen for all these years has been such a rich … END_OF_DOCUMENT_TOKEN_TO_BE_REPLACED

By Will Hall, Message Editor ALEXANDRIA (LBM) — U.S. District Court Judge Glen H. Davidson, the senior jurist for the Northern District of Mississippi, Aberdeen Division, ruled Jan. 18, 2018, that a federal lawsuit against the North American Mission Board may proceed. Will McRaney, the former executive director of the Baptist Convention of Maryland/Delaware, filed a complaint April 7, 2017, alleging NAMB President Kevin Ezell played a role in his termination from the state convention, and subsequently in McRaney being “uninvited” from speaking at a conference in Mississippi. NAMB lawyers filed “answers and defenses” for the Southern Baptist Convention entity a little more than a month later, May 18, asserting 19 defenses. But the Court focused on NAMB’s claim of a “ministerial exception” and its invoking the “ecclesiastical abstention doctrine,” as well as NAMB’s questioning of “[w]hether McRaney has adequately pled his claims.” In denying NAMB’s motion with regard to the “ministerial exception” (which prevents a court from interfering in issues between a religious institution and its ministers) against McRaney’s assertion of defamation, Judge Davidson wrote that “McRaney was indisputably not employed by NAMB … and … END_OF_DOCUMENT_TOKEN_TO_BE_REPLACED 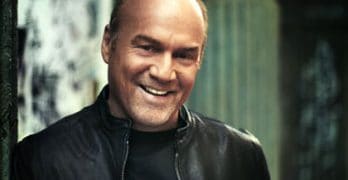 By Greg Laurie I heard about a monk who joined a monastery and took a vow of silence, with the exception of being allowed to speak two words every year. After the first year passed, he was called into the abbot’s office to speak his two words. The monk said, “Bed’s hard.” Another year passed, and again he went to speak his two words before the abbot. The monk said, “Food’s cold.” Another year went by, and he appeared once again before the abbot. “You’re allowed your two words,” the abbot told him. “What are they?” The monk said, “I quit.” “It’s no wonder!” the abbot exclaimed. “Since you’ve been here, all you’ve done is complain!” That is true of some people. All they want to do is complain. My friend James Merritt says there are two kinds of people in this world: those who are born again, and those who are born against. Some people are simply contrary. Nothing pleases them. Nothing meets their standards. They actually like to go and make trouble in the lives of others. As Proverbs 4:16 says, evil people are restless unless they’re making trouble. They can’t even get a good night’s sleep unless they have made life miserable for someone. Zig Ziglar said, “Don’t be distracted by criticism. Remember, the only … END_OF_DOCUMENT_TOKEN_TO_BE_REPLACED

By Lane Corley Olive trees produce one of the most desired and sought after fruits around the world. The trees can live for thousands of years. The olive and the olive tree is spoke of in the Bible on numerous occasions. Including a few references to family life, like in Psalms 128:3 – “Your children will be … END_OF_DOCUMENT_TOKEN_TO_BE_REPLACED

By Lane Corley Olive trees produce one of the most desired and sought after fruits around the world. The trees can live for thousands of years. The olive and the olive tree is spoke of in the Bible on numerous occasions. Including a few references to family life, like in Psalms 128:3 – “Your children will be … END_OF_DOCUMENT_TOKEN_TO_BE_REPLACED