By Staff, Baptist Message Kay Wilbanks, 66, may consider herself just an ordinary grandmother, but ever since she prayed in 2013 that her son Brock would accept Christ, God has been doing extraordinary things in her life and in the lives of many youth at Flactor Baptist Church, Leesville. Once a youth leader at Flactor Baptist, Wilbanks took a hiatus from her leadership position – after her children graduated from high school. When God placed a burden on her heart for Brock, who eventually accepted Christ, Wilbanks felt led to reach many more of the area’s young people. Though Flactor Baptist did not have anyone active in the youth group, Wilbanks did not let that hinder her from taking 14 students to the 2013 Youth Evangelism Celebration in Alexandria. Seven of the students accepted Christ. Over the next few months, the youth group was re-established, with 15 in attendance on a Wednesday evening. Wilbanks said she was tempted at one time to quit because she believed she was too old to relate to the students. But God used the situation as a reminder that He has Wilbanks there for a reason. “I’m not a minister, just an ordinary person who loves the Lord,” Wilbanks said. “The Lord has given me an exceptional … END_OF_DOCUMENT_TOKEN_TO_BE_REPLACED 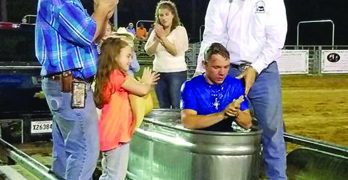 By Brian Blackwell, Message Staff Writer PINEVILLE – Alyssa Rayette Altenberger struggled with emotional setbacks for several years until, in 2014, she encountered a horse named Tony who served as a means for the youngster to develop a relationship with Christ. Since meeting Tony at the Cross Branded Cowboy Church, Pineville, he has been present for a number of special moments for Alrenberger that took place inside the church’s arena -- including her baptism in a galvanized horse trough during a November 2017 worship service. Altenberger is one of five new believers at the Cross Branded Cowboy Church baptized in 2017. Another four are awaiting baptism. “Some people might ask, ‘How do you ask Jesus to be your Savior?’” Altenberger told the Baptist Message. “Well you just have to ask him. You have to love Him enough to go to Heaven with gold streets, and you will never cry, go thirsty or hungry in Heaven. “If you want to be forgiven, you have to ask Christ to forgive you of your sins,” she added with conviction. CROSS-FOCUSED While Cross Branded opens its services to anyone, it especially appeals to those who are part of the cowboy culture. An amateur horse trainer, Pastor Herb Dickerson said many times he … END_OF_DOCUMENT_TOKEN_TO_BE_REPLACED 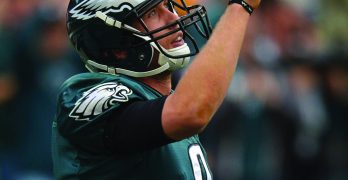 By Will Hall, Message Editor After the Eagles’ comeback win in Super Bowl LII, Tony Dungy, a high-profile Christian and a Super Bowl champion coach now working as an NFL analyst with NBC Sports, said Philadelphia quarterback Nick Foles, a stand-in for the injured franchise quarterback Carson Wentz, had his head on straight. He understands he is the backup, Dungy said, noting that Foles told him “This is Carson Wentz’s team." But Foles also told Dungy, "God has me here for just this time." Foles is a student at Liberty University and plans to become a pastor after he eventually leaves the NFL. But, Foles is not the only high profile Christian on the Eagles’ roster. As team speakers came forward during interviews surrounding the presentation of the Lombardi Trophy, awarded to the winner of the NFL championship game, each offered some mention of their love of Christ. Doug Pederson, who has strong Louisiana ties from playing for Northeast Louisiana University (now known as University of Louisiana Monroe) and coaching Calvary Baptist Academy, founded by Calvary Baptist Church in Shreveport, was bold in his testimony. When asked by NBC sportscaster Dan Patrick how to explain that just nine years ago he was coaching … END_OF_DOCUMENT_TOKEN_TO_BE_REPLACED 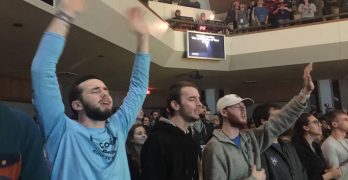 By Message Staff ALEXANDRIA - Students were challenged to take the next step in life Feb. 2-3 at the 2018 Collegiate Evangelism Conference. The conference featured messages by Rahul Agarwal, the director of men and married couples at Gwinnett Church, a campus of the non-denominational North Point Community Church in Atlanta, Ga., and worship led by the House Band, a group comprised of former Baptist Collegiate Ministry members from around the state. Students also participated in seminars and a late-night time of fellowship. Agarwal’s messages and the various seminars were centered around the theme of CEC – Next. The Baptist Message will publish an expanded story on CEC later. … END_OF_DOCUMENT_TOKEN_TO_BE_REPLACED 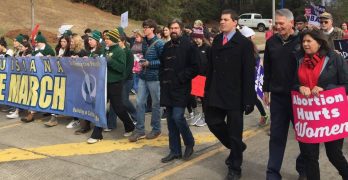 By Message Staff ALEXANDRIA/PINEVILLE - More than 5,600 turned out for the third annual Louisiana Life March Central Saturday, Feb. 3. Men and women, young and old, from various denominations and races joined together to make the journey from the Louisiana College campus in Pineville to the amphitheater in downtown Alexandria. Speakers included several Louisiana Baptists, such as Brian Gunter, pastor of First Baptist Church, Pollock, and U.S. Rep. Ralph Abraham, a member of Alto Baptist Church. Also speaking to the crowd was Baptist Message Editor Will Hall, his wife, Catherine, and their son, Jacob. The Louisiana Life Marches are a chance for different denominations, ages and ethnic and racial backgrounds to march together and pray to declare their opposition to the Supreme Court’s Roe v. Wade decision that legalized abortion in 1973. The theme for this year’s marches was “Every Life Deserves A Lifetime.” The Baptist Message will publish an expanded story later on this Life March and the North and South marches held in late January. https://youtu.be/sAnxOQlhyIg … END_OF_DOCUMENT_TOKEN_TO_BE_REPLACED 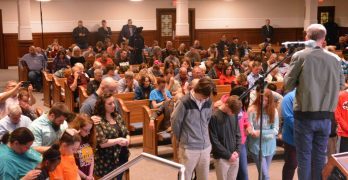 By Message Staff PINEVILLE – During an evening session of the 2018 Evangelism Conference, Brent Crowe urged hundreds of adults and youth to make sure redemption through Christ was part of their life story. “When Jesus calls us to tell a story in our life that has redemption as the theme and the redeemer Jesus as the central character, He not only bids us to tell the story but He provides us all the resources that are necessary so that theme will be true in our lives,” said Crowe, vice president of Student Leadership University in Orlando, Fla. “If redemption is not the theme of the story we are telling in our life, then our story is not worth telling.” Crowe spoke Jan. 22 to a packed crowd in the worship center at First Baptist Church, Pineville, while hundreds of youth watched from their home churches via a livestream broadcast during student night at ECON. At the invitation, three students came forward to declare Christ the Lord of lives, four repented to restore fellowship with Christ, two responded to the Holy Spirit’s call to vocational ministry and one made an undisclosed spiritual commitment. Student night also featured the testimony of Kayla Sasser, a member of the youth group at Philadelphia Baptist Church, … END_OF_DOCUMENT_TOKEN_TO_BE_REPLACED 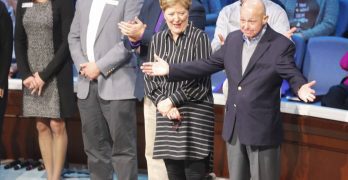 By Brian Blackwell, Message Staff Writer ALEXANDRIA – Those who worked with Wayne Jenkins during his 27-year tenure with the Louisiana Baptist Convention all agree he will be missed, but they are excited to see what the Lord has planned in the days ahead following his Jan. 31 retirement as evangelism and church growth director. “I am so thankful for Wayne Jenkins' friendship and ministry across the years,” Louisiana Baptist Convention Executive Director David Hankins told the Baptist Message. “He has been the premier director of evangelism for a long time. His own commitment personally to soul-winning and his ability to teach and inspire churches to be evangelistic has advanced the Lord’s work remarkably. I pray that Wayne and Martha will be blessed greatly as they enter a new era of service.” Keith Manuel, who has assumed Jenkins’ role Feb. 1, echoed the thought. “Wayne’s ministry has taken the message of Jesus from the bayous to the piney woods of Louisiana, as well as to the remotest parts of the Amazon and the largest cities of Brazil,” Manuel said. “His heart beats for men and women to hear the gospel, no matter the personal sacrifice he has to make to see the task to completion. Thousands of men and … END_OF_DOCUMENT_TOKEN_TO_BE_REPLACED 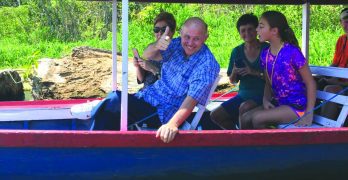 By Message Staff PINEVILLE – Wayne Jenkins may have retired as evangelism and church growth director for Louisiana Baptists, but his involvement with the annual mission trip to Brazil will continue. During his remarks Jan. 23 at the 2018 state Evangelism Conference, Keith Manuel, who assumed Jenkins’ role Feb. 1, announced that Jenkins still will lead teams from Louisiana and other states as he has in the past 33 trips there. His son-in-law, David Denton, pastor of Highland Baptist Church, New Iberia, will assist Jenkins as associate director for the trip, on a volunteer basis. Since Jenkins took his first mission group to Brazil, he and his team members have seen more than 100,000 people come to Christ and 65 church buildings constructed. Manuel is excited for the future impact Jenkins will make on the people of Brazil. “They are cooperating with Southern Baptist missionaries on the field in Brazil and the local churches to plant those churches,” Manuel said. “They’re not just throwing something together and saying good luck. They have a solid foundation basis for the work that is going on.” … END_OF_DOCUMENT_TOKEN_TO_BE_REPLACED 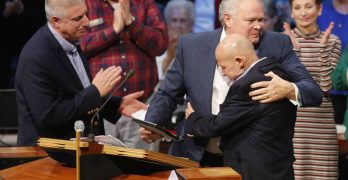 By Brian Blackwell, Message Staff Writer PINEVILLE – Wayne Jenkins, who retired Jan. 31 after 27 years as director of evangelism and church growth for Louisiana Baptists, was presented with a fitting honor during the final moments of the 2018 state Evangelism Conference at First Baptist Church, Pineville, Jan. 23 – the announcement that his alma mater, Louisiana College, has formed the “Dr. Wayne and Martha Jenkins Center for Evangelism and Missions.” Fellow members of the evangelism and church growth team joined Jenkins and his wife, Martha, on stage, and a multitude of family members gathered in front of the podium to surprise him with news his alma mater, Louisiana College, had formed the Wayne and Martha Jenkins Center for Evangelism and Missions that will reside on campus. “It was a shock they did this, especially how they could keep it a secret since this idea was first born in November,” Jenkins said. “This center has a great deal of potential to equip students and pastors and staff in the areas of evangelism and missions. I’m looking forward to getting things rolling. “It’s more than just an honor to have the center named after my wife and me – it’s another phase of ministry,” he said. “What I wanted to do was … END_OF_DOCUMENT_TOKEN_TO_BE_REPLACED