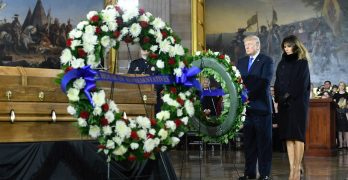 By Message Staff WASHINGTON, D.C. – Louisiana's two U.S. senators - Sens. John Kennedy and Bill Cassidy - have co-sponsored legislation honoring evangelist Billy Graham, who died Feb. 21 at the age of 99. The resolution highlighted some of Graham’s achievements during his life and ministry, such as that he counseled every U.S. president since Harry Truman, preached to 215 million people in more than 185 countries and territories on six continents and founded the Billy Graham Evangelistic Association. “The Lord truly blessed us by allowing the Rev. Graham to share his message for nearly a century,” Kennedy said in an e-mailed statement to the Baptist Message. “As a young man, I was privileged to hear that message at one of the Rev. Graham’s great crusades in Baton Rouge. “His message was simple: The only path to eternal salvation is through Jesus Christ,” continued Kennedy, who plans to attend Graham’s funeral March 2. “The Rev. Graham lived out the Gospel message through his actions, his books, television broadcasts and speeches. In troubled times of war and political unrest, he soothed us with reminders about God’s forgiveness and peace. I have every confidence that our Father will greet the Rev. Graham with those … END_OF_DOCUMENT_TOKEN_TO_BE_REPLACED

By Rebecca Holloway Our church is reading through the Bible this year using Foundations, a study by Robby and Kandi Gallaty. (The subtitle is "A 260-Day Bible Reading Plan for Busy Believers." I think that's all of us.) As I was journeying back through the story of Joseph, which begins in Genesis 37, I was struck how much his story is like a sweeping Hollywood narrative. He’s the favorite son of his father, Israel. But his brothers hated him, so they threw him in a well, sold him to gypsies, and told their father he has died. Then Joseph is taken all the way to Egypt, and where by the providence of God, he is sold to Potiphar, one of Pharaoh's officials. The Bible tells us in the early verses of Genesis 39 that the Lord was with Joseph, and he prospered in the house of Potiphar. They soon saw how valuable Joseph was, and Potiphar put Joseph in charge of his entire household. Now apparently, Joseph was handsome, and Potiphar’s wife took notice. After Potiphar’s wife falsely accused Joseph of sexual misconduct, he was thrown into prison. Things weren’t looking so great. But as before, the Lord was with Joseph and made him successful – even in prison. The warden took notice of him and made him responsible for all of … END_OF_DOCUMENT_TOKEN_TO_BE_REPLACED