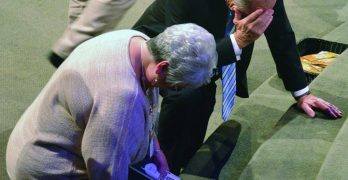 By Brian Blackwell, Message Staff Writer BATON ROUGE – The time for Harvest has arrived, Louisiana Baptists were reminded during the 2017 LBC Annual Meeting Nov. 13-14 at Istrouma Baptist Church. The largest statewide evangelism effort by Louisiana Baptists on record, 873 congregations have signed on through Nov. 15 to participate in the Harvest commitment to “pray for every home and share Christ with every person.” After two years of developing a strategy, enlisting churches and piloting methods, a strong push will take place in 2018 for concentrated prayer and intentional soul-winning. The cooperative effort includes a diversity of mass evangelism strategies as well as one-on-one evangelism approaches: multi-church crusades, door-to-door outreach, one-on-one evangelism, single-church revivals and other activities which leverage compassion ministries to share about the love of Christ. “Our current Harvest emphaphasis involves serious praying for every home as well as aggressive going,” Louisiana Baptist Convention Executive Director David Hankins told messengers and guests attending the annual meeting. “Engaging evangelism at the local area church and churches is still extremely effective. I’m thankful for the new … END_OF_DOCUMENT_TOKEN_TO_BE_REPLACED 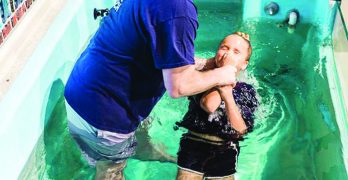 By Brian Blackwell, Message Staff Writer MOSS BLUFF (LBM) – While the outer bands of Tropical Storm Harvey caused a tempest in the Gulf of Mexico as it approached southwest Louisiana Aug. 27, three people at First Baptist Church in Moss Bluff were troubling some waters in their own way. Becky Toney was immersed after proclaiming her profession of faith, just moments before the same experience was celebrated by Carli Beth Sharpton and Nadyah Bustillo, two young girls she had counseled four months earlier about salvation, an encounter God used to bring her to obedience with regard to baptism. Toney had surrendered her life to Christ in 2014, but had to be baptized. “God led me to speak to one of the girls and then little by little He started revealing to me my need to get things straight and in the right order,” Toney said. “That’s when I was convicted that now was the time to follow through with obedience.” The three baptisms are among 65 that First Baptist Moss Bluff had recorded for the first 10 months of 2017. The church acknowledges each symbolic act with the symbolism of lighting a bulb in a display of lights that spells out the word ‘life.’ Last year, the lights spelled out ‘believe.’ Pastor Steve Bennett … END_OF_DOCUMENT_TOKEN_TO_BE_REPLACED 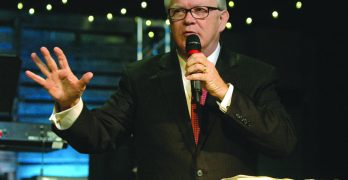 By Brian Blackwell, Message Staff Writer BATON ROUGE (LBM) -- Southern Baptist Convention Executive Committee President Frank Page said too many times when pastors encounter difficult circumstances they are prone to believe God has forgotten them. But, he said during those encounters it is important they remember the sound of God’s voice from other times in their lives and to be still and listen for Him, again. “You may have come here tonight dry as the bones we just sang about,” Page said during the Pastors’ Conference, held Nov. 12-13 at Istrouma Baptist Church in Baton Rouge. “You may believe, ‘God doesn’t know where I am,’ and, ‘He doesn’t know my name.’ But He does.” Citing 1 Samuel 3:1-10, Page explored the call of Samuel who was attentive for the sound of God’s voice. “Every time we come before the Lord (we need to say) ‘Lord, speak, I’m listening,’” Page said. He said God placed Samuel, who later became a prophet, not in the most appealing city but rather in Shiloh, a community where few people visited. However, that is where God revealed himself to Samuel. “You may think that God doesn’t know your name and doesn’t know where you are,” he said. “But He does know where you are. Maybe, where you are, you … END_OF_DOCUMENT_TOKEN_TO_BE_REPLACED 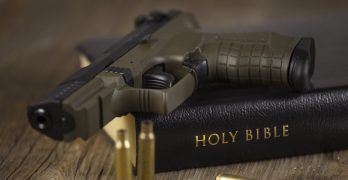 ALEXANDRIA (LBM)—Louisiana is an open carry state, meaning any gun must be in plain sight unless the bearer has a concealed carry permit. But in both instances, open and concealed carry, there are restrictions: Guns are prohibited on school campuses, federal facilities, and places that serve alcoholic beverages, for instance (not a complete list). Moreover, private property owners, including churches, can restrict people from open carrying on their respective properties, too. Importantly, according to Louisiana Revised Statute 40:1379.3, it is illegal to conceal carry in a church, unless: -- the pastor approves weapons on campus; -- the congregation is informed that weapons are present; -- the person with the weapon has a normal concealed carry permit, and, -- that person completes eight hours of additional “tactical” training, annually. … END_OF_DOCUMENT_TOKEN_TO_BE_REPLACED

By Lane Corley Olive trees produce one of the most desired and sought after fruits around the world. The trees can live for thousands of years. The olive and the olive tree is spoke of in the Bible on numerous occasions. Including a few references to family life, like in Psalms 128:3 – “Your children will be … END_OF_DOCUMENT_TOKEN_TO_BE_REPLACED

By Lane Corley Olive trees produce one of the most desired and sought after fruits around the world. The trees can live for thousands of years. The olive and the olive tree is spoke of in the Bible on numerous occasions. Including a few references to family life, like in Psalms 128:3 – “Your children will be … END_OF_DOCUMENT_TOKEN_TO_BE_REPLACED