ST LOUIS - Philip Vandercook is passionate about the mission and purpose of Southern Baptists. This week he is among a contingent from Louisiana who have traveled up to St Louis to learn more about how they can better fulfill their mission and cooperate with one another. Vandercook, who serves as director of Global Maritime Ministries in New Orleans, shared with the Baptist Message more about why he loves being Southern Baptist. "This is what being Baptist is all about, cooperating with one another, seeing what we can do together to advance the Kingdom of God," he said. https://www.youtube.com/watch?v=HkMhag-Tf8M … END_OF_DOCUMENT_TOKEN_TO_BE_REPLACED

ST LOUIS - Prior to the Southern Baptist Convention Annual Meeting, Louisiana Baptists made their way to St Louis for a variety of activities. From countless fellowships to spending time together around the convention hall or area restaurants, Annual Meeting-related happenings were enjoyed by many in attendance. Look for more photos on baptistmessage.com of the first day of the Annual Meeting. … END_OF_DOCUMENT_TOKEN_TO_BE_REPLACED 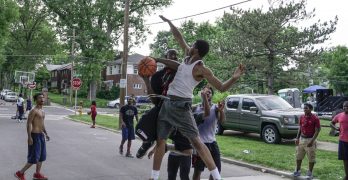 By Tobin Perry, NAMB communications ST. LOUIS (BP) - Southern Baptist volunteers reported more than 350 professions of faith in Jesus Christ during Crossover events throughout metro St. Louis this year. One man who made a decision for Christ had been considering suicide just a few days earlier, said Eloy Rodriquez. Rodriquez, a longtime Crossover volunteer, serves as Hispanic pastor of Idlewild Baptist Church in Lutz, Fla. Rodriquez said his team knocked on the door of the man's house and asked if they could pray with him. The man told the team about a friend who was struggling with cancer. As they were preparing to pray, the man then opened up about his own struggles. "Last Sunday, he closed his eyes while driving," said Rodriquez, who has been bringing teams of volunteers to share Christ during Crossover since 1999. "He was willing to have whatever happen to him, happen -- suicide basically. Then he opened his eyes, he was in the other lane, but there was no one else there. He pulled over and just cried -- not because he was about to kill himself but because he realized he could have killed someone else." Rodriquez then prayed with the man to receive Christ. That was one of more than 50 Gospel conversations that took place … END_OF_DOCUMENT_TOKEN_TO_BE_REPLACED 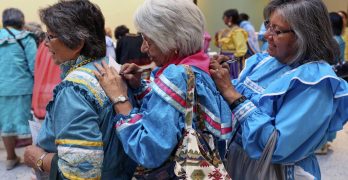 By Kathie Chute, Golden Gate Baptist Theological Seminary communications ST. LOUIS (BP) - About 500 Southern Baptists gathered June 12 for the opening sessions of WMU's 2016 Missions Celebration and Annual Meeting in St. Louis, Mo. With a theme of "By All Means," the two Sunday programs recognized current and retired missionaries, as well as International Mission Board staff, and celebrated Wanda Lee's service as she retires as executive director of WMU. "I believe just as strongly today as I did 16 years ago that WMU is important to the Kingdom," she said. "We have the opportunity to make a difference. Our charge first and foremost is to be a light to the nations. There is strength in our union. There is strength in our collective purpose of missions. May our song truly be a song for the nations." Lee said she was working as a nurse when God called her to missions. When she returned home to serve in the U.S., her call to missions did not end. "My calling was to go wherever God leads," she said. "My call has not changed, only the place. No other ministry in Baptist life devotes itself exclusively to missions. What we do matters because we are shining a light." Jeff Iorg, president of Golden Gate Baptist Theological Seminary, … END_OF_DOCUMENT_TOKEN_TO_BE_REPLACED 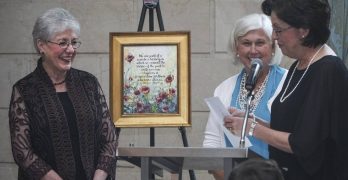 By Julie Walters, WMU communications ST. LOUIS (BP) - Approximately 150 Southern Baptist leaders, family members and friends from across the country gathered in St. Louis on June 11 to honor Wanda Lee and her leadership of national WMU over the past 20 years - 16 as executive director and four as president. Frank S. Page said he got to know Lee in 2010 when assumed his current role as president and CEO of the Southern Baptist Convention's Executive Committee. Page recited Micah 6:8, "What does the Lord require of thee, but to do justly, and to love mercy, and to walk humbly with thy God? "I believe Wanda Lee has exhibited that great trio of imperatives from our Lord," Page said. "I believe she has done what is right, what is just. She is merciful, and many of you are the recipients of her mercy and ministry in your own life. She is a strategist, an organizational genius, yet is always humble and gives credit to those around her. I am honored to call her my friend, and I thank God for her." The three women who served with Lee as president of national WMU - Debby Akerman of Myrtle Beach, S.C. (2010-2015); Kaye Miller of Little Rock, Ark. (2005-2010), and Janet Hoffman of Farmerville, (2000-2005) - each reflected on their years … END_OF_DOCUMENT_TOKEN_TO_BE_REPLACED

ST LOUIS - Jason McGuffie had just landed in St Louis, but already was voicing excitemenr about this year's Southern Baptist Convention Annual Meeting. He is pastor of FBC Tallulah. Check back with the Baptist Message for more updates through articles, videos and photos of what's happening at the SBC Annual Meeting, with a special emphasis on Louisiana Baptists. https://youtu.be/C8OiJoC28XQ   … END_OF_DOCUMENT_TOKEN_TO_BE_REPLACED

ST LOUIS - Brad Jurkovich appreciates many things about the SBC Annual Meeting each year, but shared with the Baptist Message what he enjoys the most. "I love what God's doing - the passion for prayer, revival, awakening," said Jurkovich, pastor of First Bossier. https://youtu.be/IRzdMfIgD7o … END_OF_DOCUMENT_TOKEN_TO_BE_REPLACED

ST LOUIS - Mike Holloway shared with the Baptist Message about the role suffering plays in everyone's lives. He was reminded of that during a message at the SBC Pastors Conference. Holloway, who served as president of the Louisiana Baptist Convention in 2008 and 2009, is now the pastor of Ouachita Baptist Church in West Monroe. In the last few months, the church has gained 50 new members and now averages 150 in Sunday morning worship. Since February, the church has baptized 15, with another 16, including 11 children, awaiting baptism.   https://youtu.be/u_3NxgANVUI     … END_OF_DOCUMENT_TOKEN_TO_BE_REPLACED

ST LOUIS - A day before the SBC presidential election, New Orleans pastor David Crosby took a few moments to thank Louisiana Baptists. He is one of three candidates for the office. The election will take place Tuesday afternoon. Crosby is pastor of First Baptist New Orleans. https://youtu.be/XDXVkt-Bx0M … END_OF_DOCUMENT_TOKEN_TO_BE_REPLACED 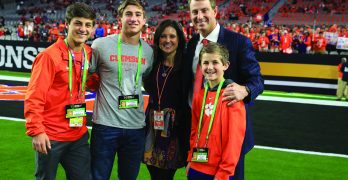 By Butch Blume, South Carolina Baptist Courier CLEMSON, S.C. -- When Father's Day rolls around this year, Dabo Swinney won't be able to pick up the phone and call his dad. But Clemson's head football coach still has a few voicemail messages from the man he calls "Big Erv," who passed away last August. Maybe he'll listen to them again, as he does from time to time. Last summer, in the months before he died, Ervil Swinney had been receiving treatments in Greenville for a recurrence of lung cancer. Still, he seemed to be doing pretty well. By August, he was back at his appliance shop at the M&M Hardware in Alabaster, Ala., where he enjoyed "holding court" with his buddies. He felt tired and sat down to take a nap. He never woke up. He was going to return to South Carolina the next day for a checkup and a week's stay with his son and his family. He was 70. "I think about him every day," Swinney said, pointing to a framed photograph among the scores of pictures covering the walls, shelves and desktop of his office. The photo shows his dad watching a game at Clemson's Death Valley, both arms raised in the air, celebrating a big play by the team coached by his youngest son. "I look at that picture all the time," Swinney said. … END_OF_DOCUMENT_TOKEN_TO_BE_REPLACED

By Rebecca Holloway PINEVILLE, La. – For years, I have read and heard the statement, “We need to hold life/our family/our possessions with an open hand.” The idea is that we are not in control of our lives or anything else on this planet. God is in complete control of all things and has the power and right to … END_OF_DOCUMENT_TOKEN_TO_BE_REPLACED

By Rebecca Holloway PINEVILLE, La. – For years, I have read and heard the statement, “We need to hold life/our family/our possessions with an open hand.” The idea is that we are not in control of our lives or anything else on this planet. God is in complete control of all things and has the power and right to … END_OF_DOCUMENT_TOKEN_TO_BE_REPLACED