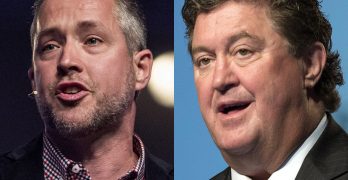 ST LOUIS (BP) -- Although an announcement of a new Southern Baptist Convention president was expected on Tuesday (June 14), no clear winner was determined the day of election. A run-off between nominees North Carolina pastor J.D. Greear and Memphis-area pastor Steve Gaines failed to provide a clear majority, as required by Roberts Rules of Order. A second run-off election between the two pastors has been scheduled for the Wednesday morning session at 10:58 a.m. SBC President Ronnie Floyd reported results of the run-off election at the beginning of the Tuesday night session. Of the 7,230 messengers registered at the time of the first runoff, 4,824 ballots were cast. To be declared a winner, a nominee is required to win 50 percent plus 1 of ballots cast, or 2,413 or more votes. Gaines received 2,410 votes or 49.96 percent while Greear received 2,306 votes or 47.80 percent. However, 108 votes were considered illegal because the wrong ballot was used or an indistinguishable mark was made. In explaining the first runoff results, lead parliamentarian Barry McCarty said "there is no doubt what the vote is. It has been counted and recounted." But Roberts Rules of Order require that the 108 illegal votes be counted to determine a … END_OF_DOCUMENT_TOKEN_TO_BE_REPLACED 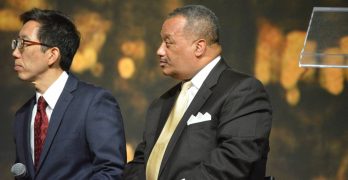 ST LOUIS - Fred Luter believes America doesn't have a skin problem but rather a sin problem on the issue of racism. And the turnaround must start with the churches, Luter said during a racial reconciliation panel in the Tuesday morning session of the Southern Baptist Convention's Annual Meeting. "I believe the future of the Southern Baptist Convention is bright if we continue to challenge each other to do what God has called us to do and understand red, yellow, black and white, they are all precious in his sight," said Luter, pastor of Franklin Avenue Baptist Church in New Orleans. "Let's spread the salt, let's turn on the light." He was one of the pastors on a panel "A National Conversation on Racial Unity in America." In addition to Luter, the panel featured President Jerry Young of the National Baptist Convention USA, Marshall Blalock, pastor of First Baptist Church in Charleston, S.C., and Joe Costephens, pastor of First Baptist Church in Ferguson, Mo. Luter, who was elected as president of the SBC on June 19, 2012 was the first African American to be elected to the post. His historic election took place in his hometown of New Orleans during the annual meeting. https://youtu.be/UWfHcE4ECic … END_OF_DOCUMENT_TOKEN_TO_BE_REPLACED 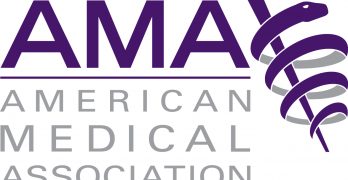 By Benjamin Clapper, Louisiana Right to Life CHICAGO – At its annual meeting June 13, the American Medical Association (AMA) rejected a Louisiana State Medical Society proposal to reaffirm the AMA's long-standing policy against physician assisted suicide. Instead it approved a study-resolution to explore AMA adoption of a neutral position on physician assisted suicide, which was often referred to as "aid-in-dying" in the debate. The study will be led by the AMA Council on Ethical and Judicial Affairs, which will study a possible change to the AMA policy and report back with recommendations to the AMA Annual Meeting next year. Dr. Jeff White, a member of the Louisiana State Medical Society and physician ally of Louisiana Right to Life, said the following after the AMA vote: "The AMA's decision to study a possible change in position on doctor-prescribed suicide is very concerning for the future of the integrity of the medical profession. For millennia, the medical profession has been in unison that physicians prescribing death for their patients is antithetical to the mission of healing integral to the role of a physician. “If the AMA changes it long-standing policy of opposition to doctor-prescribed suicide,” he said. “It will … END_OF_DOCUMENT_TOKEN_TO_BE_REPLACED

ST LOUIS - Chad McClurg knows all too well the role Southern Baptists have played in his ministry. The director of the University of Louisiana at Monroe Baptist Collegiate Ministry, McClurg shared with the Baptist Message during his visit to the SBC Annual Meeting how he is a product of Southern Baptists. https://youtu.be/re402RQ6QSk … END_OF_DOCUMENT_TOKEN_TO_BE_REPLACED 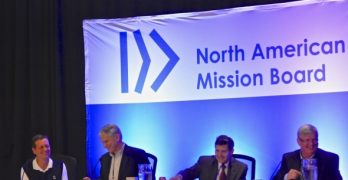 by Tammi Reed Ledbetter/TEXAN ST LOUIS (Christian Examiner) — Following an unanticipated two-hour, closed-door session labeled as a "workshop," trustees of the North American Mission Board meeting in St. Louis June 13 unanimously approved a recommendation by officers indicating their satisfaction with a "thorough examination and review" of the Southern Baptist entity's relationship with the Mid-Atlantic Baptist Network (MABN). "Representatives of this board have conducted a thorough examination and review of the dealings between NAMB leadership and the Mid-Atlantic Baptist Network and have fully reported those findings to the full Board of Trustees, who discussed the findings at length and considered them when making this recommendation," the board was told as a part of background information before the vote. "In addition, the trustees were kept informed about challenges regarding the relationship between NAMB and MABN as the challenges developed, and NAMB's executive leadership sought input from the chairman and other officers of this board regarding such challenges." The motion approved by trustees without discussion during their June 13 meeting a day before the annual Southern Baptist Convention convenes indicated by the … END_OF_DOCUMENT_TOKEN_TO_BE_REPLACED 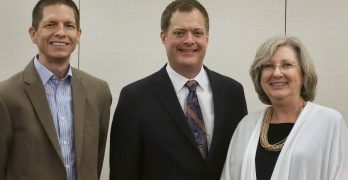 By David Roach & Art Toalston, Baptist Press ST LOUIS (BP) -- The Southern Baptist Convention Executive Committee's June 13 decision not to recommend amending SBC Bylaw 26 has forced the cancelation of a panel discussion scheduled for June 15 with SBC entity heads fielding questions from messengers to the convention's annual meeting in St. Louis. Instead, each entity president will answer messenger questions for four minutes at the end of his report. The EC also referred back to its Bylaws Workgroup for further discussion of a proposal to grant EC representation to Baptists in five pioneer regions of the United States. In other action at the EC's meeting in St. Louis prior to the June 14-15 SBC annual meeting there, committee members elected new officers, honored retiring Woman's Missionary Union executive director Wanda Lee and heard a report from outgoing SBC President Ronnie Floyd. Entity questions at SBC annual meetings The EC's Administrative Committee considered a recommendation to amend Bylaw 26 that would have permitted two or more entities to be grouped together by the Committee on Order of Business for a messenger Q&A session. The recommendation stipulated that each Q&A session would allot "no less than … END_OF_DOCUMENT_TOKEN_TO_BE_REPLACED 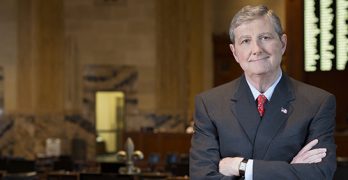 By John Kennedy, Louisiana State Treasurer Malcolm Bird was a first-time father with a toddler whose pinky finger was bleeding. He rushed his young daughter to a Connecticut emergency room, where a doctor washed off the finger and put a Band-Aid on it. That Band-Aid, which fell off in the car on the way home, cost Bird $629. Bird learned the hard way what most of us already know. The emergency room is an expensive place to treat minor injuries. If your kid cuts her finger, just wash it off and slap a Band-Aid on it. If your kid breaks her leg on a trampoline, go to the emergency room. Unfortunately, too many people treat the emergency room like a primary care physician's office, and they don't just do it once like Bird. They run to the emergency room when their stomach's upset, they're depressed, their back hurts or they get a pimple. The emergency room is expensive because it's expensive to run. It exists to save lives, not to dispense really pricey Band-Aids or aspirin. Our health care budget in Louisiana is out of control, and we've got to cut costs. As state treasurer, I'm constantly juggling funds for agencies because revenue isn't supporting expenses. The Centers for Disease Control and Prevention estimates that 136.3 … END_OF_DOCUMENT_TOKEN_TO_BE_REPLACED

ST LOUIS -  Professor Russell Meek and Louisiana College President Rick Brewer are spreading the word to Southern Baptists about the school in Pineville. They and other LC representatives will be manning a booth at the Southern Baptist Convention's Annual Meeting and invite those of you there to stop by for a visit. https://youtu.be/apz6mIfyakI … END_OF_DOCUMENT_TOKEN_TO_BE_REPLACED 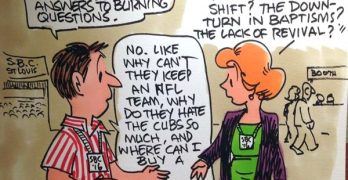 ST LOUIS - When you mention the Southern Baptist Convention, Jeffery Friend can't help but smile. As pastor of Suburban Baptist Church in New Orleans, Friend is proud to be affiliated with the SBC as an officer with the National African American Fellowship. He is spending a few days in St Louis for the 2016 SBC Annual Meeting and related functions and shared with the Baptist Message more about the National African American Fellowship, where he serves as central regional director. "We are not just a separate entity in the convention," Friend said. "We are all the SBC. We are all part of the convention." https://youtu.be/jK3ZmShbuHo … END_OF_DOCUMENT_TOKEN_TO_BE_REPLACED

By Joe McKeever “‘…your ways are not my ways,’ saith the Lord.”  (Isaiah 55:8) Keep an eye on how the Lord works in your life. You might learn something useful for the next time He wants to use you. This little couplet seems to sum up 90 percent of what Scripture and life teach us concerning the operation … END_OF_DOCUMENT_TOKEN_TO_BE_REPLACED

By Joe McKeever “‘…your ways are not my ways,’ saith the Lord.”  (Isaiah 55:8) Keep an eye on how the Lord works in your life. You might learn something useful for the next time He wants to use you. This little couplet seems to sum up 90 percent of what Scripture and life teach us concerning the operation … END_OF_DOCUMENT_TOKEN_TO_BE_REPLACED