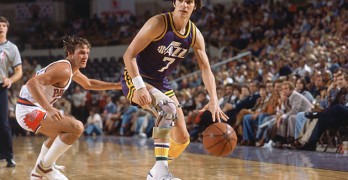 By Ron F. Hale, Minister of Pastoral Care & Senior Adults, West Jackson Baptist Church Looking back, his remark is eerie – part premonition, a pinch of predestination, and a pint of paradox. In 1973, Andy Nuzzo, a reporter for the Beaver County (PA) Times, asked 25 year-old Pete Maravich a question. Pete said, “I don’t want to play 10 years in the NBA and die of a heart attack at 40.” On January 5, 1998, the reported last words of Pete Maravich were, “I feel great!” Maravich, the greatest scorer in NCAA college basketball history, and ten-year veteran of the NBA, was 40 years old when he collapsed to the gym floor. The man with a thousand moves, the Houdini of the hardwood, was dead within seconds. His haunting self-defeating prophecy feeds the mystery. James Dobson of Focus on the Family had flown Maravich to Pasadena, California, to speak on his national radio show. Dobson arranged for a friendly pickup basketball game at Pasadena’s First Church of the Nazarene before the work began. Ralph Drollinger, the 7-foot-2 former UCLA center was also invited to play. Taking a quick break after 40 minutes of play, Dobson and Maravich were talking and walking off the court. Out of the blue Pete fell to the floor like a … END_OF_DOCUMENT_TOKEN_TO_BE_REPLACED 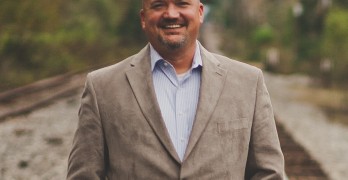 By Brian Blackwell, Message Staff Writer HAUGHTON – Gevan Spinney knows the challenges that lie before him as the new president of the Louisiana Baptist Convention. But despite what the future holds, Spinney believes the best days are yet to come for the 1600 churches that make up the state convention. “I see an opportunity and an open door to build upon that which has been battled for in our past,” said Spinney, pastor of First Baptist Church in Haughton. “There are aspects of this position in which I feel inadequate, but I do know who God calls, He will also equip.  I am excited to see God’s plan unfold.” Spinney is assuming the role that outgoing LBC President Steve Horn held for two terms. During his term, Horn called for several called days of prayer in different areas of the state and spearheaded a pastor-driven campaign to increase Cooperative Program giving through the Pledge. In Horn’s term, messengers adopted the 2020 initiative that seeks to reach every generation and every people group in the state with the Gospel by the year 2020. The 2020 initiative was a collaborative effort of 20 teams made up of 20 members each that began under the leadership of Waylon Bailey, LBC president before Horn. Spinney … END_OF_DOCUMENT_TOKEN_TO_BE_REPLACED 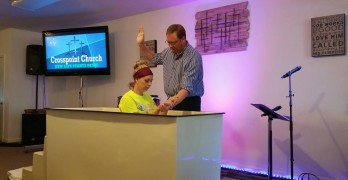 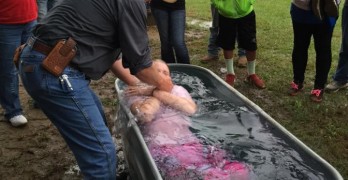 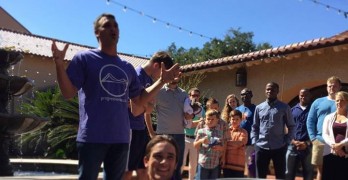 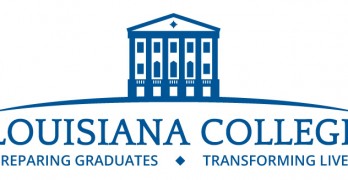 By Dr. Marvin Jones, Louisiana College The training of preachers and pastors has a long-standing tradition within Christianity. Paul’s command to Timothy to “train faithful men” (II Tim 2:2) is an essential for the church’s spiritual health. This tradition of Christian education supporting the Christian church has continued ever since. My brief review of the Apologists and Monasticism will demonstrate the concept of pastor training and pastoral ministries support the health of the church. The review of the Apologists will show that a theologically trained pastor is healthy to a congregation as opposed to a theologically trained monk who provided limited leadership to the church. The Apologists The early church faced intellectual and spiritual challenges from the Roman culture, including attacks on the credibility of the gospel. The Roman strategy was not only to undermine the influence of Christianity but to prove it was spiritually and intellectually dismissive. These polemical battles for Christian truth were often fought in churches by competent pastors. The pastors were known as the Apologists. The Apologists were a second-century product of the Christian church which interacted with its cultural counterpart. These … END_OF_DOCUMENT_TOKEN_TO_BE_REPLACED 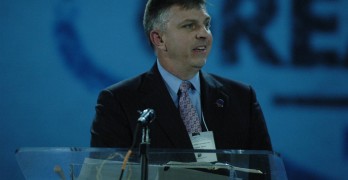 By Philip Timothy, Message Managing Editor LAFAYETTE – His presidency was defined by challenges but tempered by encouragement. Through it all, though, he led the way by example. Over the last two years, Steve Horn, pastor of First Baptist Church of Lafayette, faithfully served Louisiana Baptists as president of the Louisiana Baptist Convention in which he faced significant cultural and financial challenges. But in typical Horn fashion he took each one head on relying on God’s Holy Word and providence. His term officially ended at the LBC’s 168th annual meeting Nov. 10th. “I want to first of all to say thank you Louisiana Baptists for allowing me to serve these last two years,” said Horn. “The greatest blessing I received during this time has been strengthened relationships and some new relationships. “I also want to say thank you for responding to the challenges facing our convention, our state and our country,” he continued. “Many of you responded to my challenge to come and pray with me corporately and individually in 2014. “In 2015, you once again responded by taking ‘The Pledge’ toward increasing giving to the Cooperative Program,” said Horn. “I look with great anticipation to see how God blesses your renewed … END_OF_DOCUMENT_TOKEN_TO_BE_REPLACED 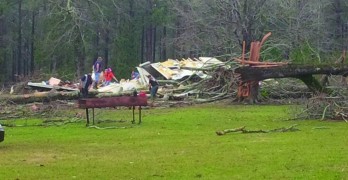 By Philip Timothy, Managing Editor CALCASIEU – Pastor Courtland Stokes and his wife believe they may have witnessed a “Christmas miracle’ Dec. 21 after a brush with an EF1 tornado. The couple had just finished watching the 5 o’clock news and thought the severe weather watch had passed without incident when limbs started to hit the house. They scrambled into their bathroom and shut the door. “We hadn’t been in there but a moment when we heard the wind,” said Stokes, who is pastor of Peniel Baptist Church in Calcasieu. “It sounded like a lot of people screaming at the same time in the same pitch. It was very loud. The next thing we knew we felt something slam into the house and then it was gone. “We stepped out of the house,” he said. “Our carport, a small shed and some metal posts buried two to three feet in the ground in concrete were gone. The storm had just ripped them out of the ground. Our car was also under that carport but amazingly it did not have a scratch on it.” The same could not be said for 54-year-old Mike Smith, who is a member of Peniel Baptist, or his trailer which rested a short distance from the parsonage. “As we were surveying the damage to our carport, we looked out and saw Mike’s trailer,” … END_OF_DOCUMENT_TOKEN_TO_BE_REPLACED

By Billy Graham Christmas is a special time. It is a family celebration. Other holidays are different. Good Friday and Easter are usually celebrated in church. National days are honored with speeches, parades and the ceremonies of government. But Christmas is glorified in the home because it is the celebration of a birthday. Yet there is irony in the celebration of the birth of Jesus Christ. He was born away from home, on a journey that symbolized the restless and the wandering nature of the world into which He came. He was born in the insecurity of a barn, a symbol of the fact that during His public ministry, He would have very little home life. He roamed the roads and towns of ancient Palestine. He died, taking the ordeal of the cross so that out of His suffering and His victorious resurrection mankind could find redemption. Christmas means different things to different people. To some, Christmas is merely a means to make more money. People vie with each other in their preparation for the celebration of the occasion. Some of them do not believe in Christ; they may even hate Him. But Christmas has become big business. People are more concerned to hear about their profit from Christmas than to hear about the Prophet from … END_OF_DOCUMENT_TOKEN_TO_BE_REPLACED

By Franklin Graham Jesus’ birth was the fulfillment of numerous prophecies in the Old Testament that foretold the incarnation of the Son of God, who would deliver men from the guilt, penalty and power of sin, which has brought death and enslavement since the time of Adam. More than 700 years before the Savior was born, Isaiah prophesied: “For to us a child is born, to us a son is given; and the government shall be upon his shoulder, and his name shall be called Wonderful Counselor, Mighty God, Everlasting Father, Prince of Peace. Of the increase of his government and of peace, there will be no end” (Isaiah 9:6-7). The Scriptures actually foretold the Messiah’s coming in the Book of Genesis when the Lord spoke to the serpent following the calamitous disobedience of Adam and Eve in the garden: “I will put enmity between you and the woman, and between your offspring and hers; he [Christ] will crush your [Satan’s] head, and you [the devil] will strike his [Christ’s] heel” (Genesis 3:15, NIV). Jesus came two millennia ago to a small Judean village for one ultimate purpose: to die on a horrid Roman instrument of execution—the cross—for the sins of men. There He would deal with the universal penalty and consequences of … END_OF_DOCUMENT_TOKEN_TO_BE_REPLACED

By Waylon Bailey Recently, I saw a tweet on Twitter that asked the question, “What would Jesus do in the midst of a worldwide pandemic?” No answer to the question was given, but the author obviously had an agenda and a suggested answer. The good news is that it led me to really ask, “What would Jesus … END_OF_DOCUMENT_TOKEN_TO_BE_REPLACED

By Waylon Bailey Recently, I saw a tweet on Twitter that asked the question, “What would Jesus do in the midst of a worldwide pandemic?” No answer to the question was given, but the author obviously had an agenda and a suggested answer. The good news is that it led me to really ask, “What would Jesus … END_OF_DOCUMENT_TOKEN_TO_BE_REPLACED