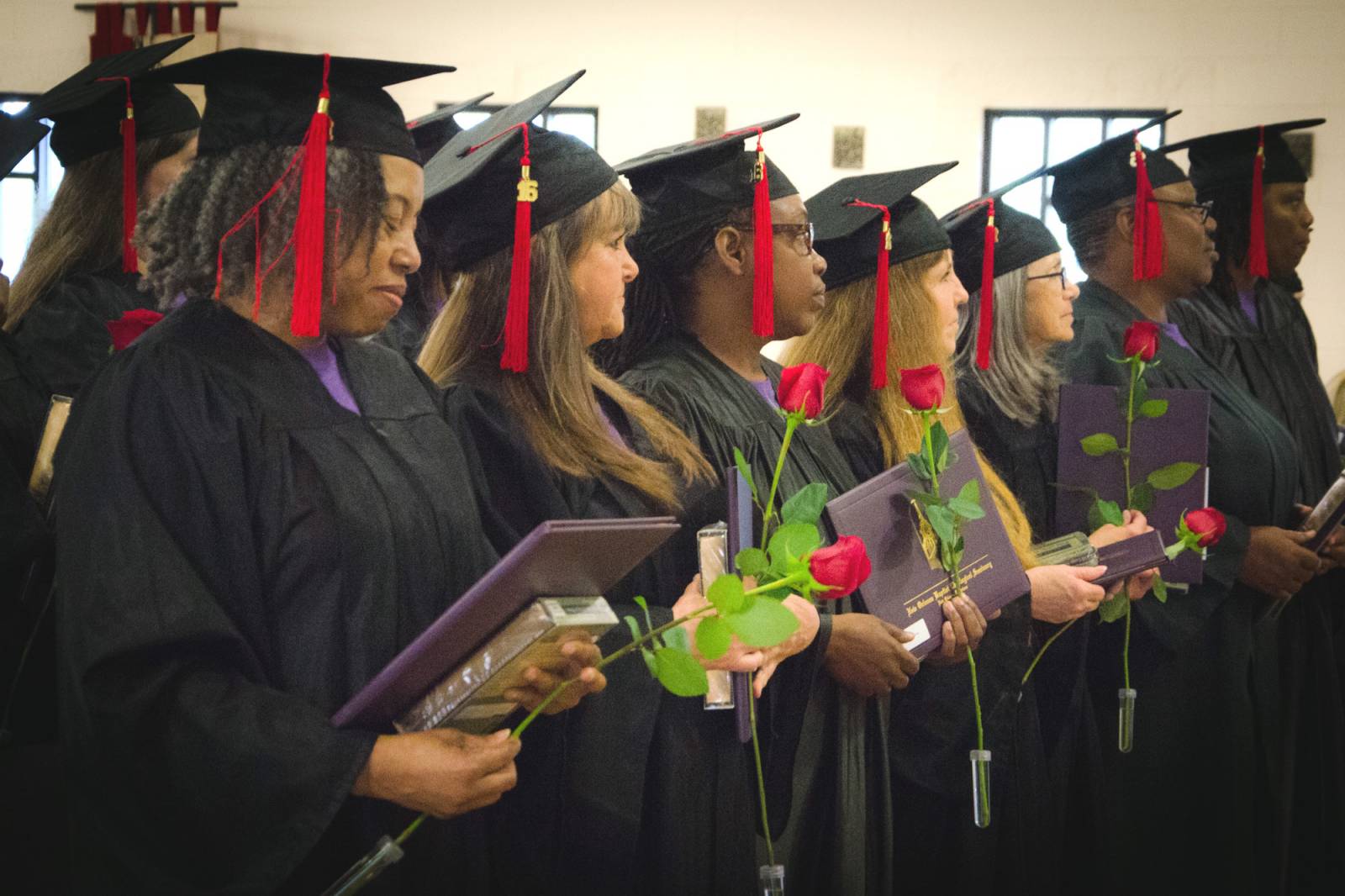 The first undergraduate degrees at Louisiana Correctional Institute for Women were awarded May 18 by New Orleans Baptist Theological Seminary's Leavell College, marking a milestone for the program that began five years ago. Photo by Marilyn Stewart

NEW ORLEANS — Having overcome a crisis of faith to complete her college degree, Brenda Thornton walked the chapel stage at the Louisiana Correctional Institute for Women.

Thornton was one of 13 LCIW graduates in the first-ever awarding of bachelor degrees at the prison by New Orleans Baptist Theological Seminary’s Leavell College, marking a milestone for the program that began five years ago.

“I’ll be honest, I didn’t think I would make it,” said Thornton, who received a bachelor of Christian ministry degree with a minor in women’s ministry May 18.

Thornton credited Sandra Vandercook, NOBTS/Leavell College associate professor of English and education, with helping amid her spiritual storm, saying, “What helped me? My professor.”

NOBTS President Chuck Kelley challenged the LCIW graduating class to be ready for what God had planned next in their lives.

“I don’t know what God will do with you or through you, but I know He has plans,” Kelley said. “Get ready. Get busy. God has something He wants to do.”

Drawing from the biblical account of Joseph, Kelley reminded listeners that those who sold Joseph into slavery meant him harm, but God in His sovereignty intended it for good and used it to change lives.

“We’re here because we believe in you,” Kelley told the graduates. “And we believe that the power of your life given in ministry to others can make LCIW, and the wide world beyond, a different place.”

Noting that redemption is the exchange of one item for another, Kelley pointed to the redemption won by Christ and said no life is beyond a fresh start.

Some LCIW graduates like Thornton previously were awarded the 15-hour certificate as well as associate degrees in women’s ministry.

Kristi Miller, assistant warden and director of the program, told the graduates in opening remarks that they made her proud. Miller holds a Ph.D. from NOBTS.

“This is an academic accomplishment, but that’s not why I’m most proud,” Miller said. “I’m proud of you walking in a manner worthy of your calling…. You are making a difference in the lives of the women here.”

A maximum and a minimum security prison housing more than 900 offenders, LCIW is Louisiana’s only women’s prison. For men, NOBTS has operated a degree program at the Louisiana State Penitentiary in Angola for 20 years, with 30 graduates currently serving as “missionaries” and church planters in other institutions. Similar programs later were started at the Mississippi State Penitentiary at Parchman; Phillips State Prison in Buford, Ga.; and Hardee Correctional Institute in Bowling Green, Fla.

Rhonda Kelley, NOBTS president’s wife and adjunct professor of women’s ministry, said supporters were prompted by the success at Angola to envision a similar program for women.

“The vision began to take shape as donors made possible a beautiful chapel on the prison grounds to house the seminary library and academic classroom,” Rhonda Kelley said. “Prison personnel and NOBTS leaders saw the potential of Christian women at LCIW to make a difference inside the prison and beyond.”

Carolyn Adams, spokesperson for the graduating class, thanked administration, faculty, family members and Louisiana benefactors of the program, and described the long journey to graduation. “Here we stand,” Adams said. “To God be the glory as He continues to sharpen us, to mold us, and to use us.”

NOBTS Provost Steve Lemke thanked the Louisiana Department of Corrections and the LCIW staff, saying, “We simply could not have this program apart from you.”

“We owe a debt to Louisiana Baptists,” Lemke told the audience. “This is a glad day and we look forward with anticipation to what God is going to do with your lives.”

By Stewart Holloway PINEVILLE, La. - Transitions are some of the most beautiful things that occur in life. In music, we can feel our spirits lift as a modulation occurs. In sports, transitions cause us to rise from our seats and cheer on our team as the football is run into the end zone or the basketball is … END_OF_DOCUMENT_TOKEN_TO_BE_REPLACED